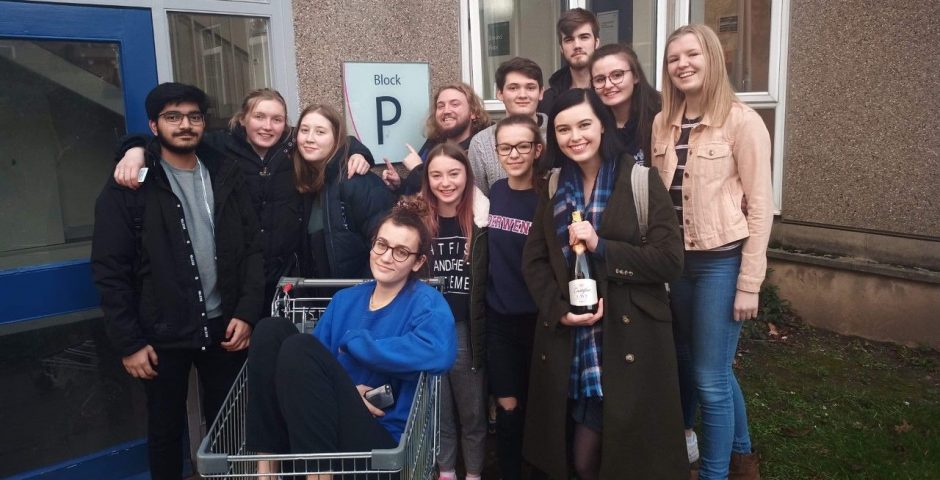 When filling out my accommodation requests and awaiting a place at the University of York, Derwent college’s economy, ensuite, catered offer sounded perfect. Your own private bathroom with weekday breakfast and dinners, absolute bliss. What more could you want? However, it soon became apparent that we got a lot more than we bargained for, being placed in Derwent’s P-Block.

It all started one night when we were hosting a great pres in our kitchen, suddenly in bursts a group of rugby lads, ransacking the fridge and stealing a bottle of Heineken. Although one of the guys in our flat was pretty annoyed that he was now one bottle down, we just brushed it off.

It was just uni life, someone playing a joke and thinking it was a bit of a laugh, no harm done right? We went about our daily lives for another few weeks, enjoying our time in P-block and everything had been pretty normal until one morning, we woke up to some odd messages in our block group chat.

Bodily fluids in the kitchen

It seemed at first that someone had broken into the kitchen again and had decided to have a food fight with the contents of the fridge. Mayonnaise had been thrown through the corridor, cheese all over the place, milk lashed across the kitchen and then, an image of a mysterious looking liquid pops into the group chat… p*ss.

Making their mark on the kitchen

Someone had thought it was a right laugh to whip it out and piss all over the kitchen floor. As you can imagine, the block was livid. After reporting the incident to the college manager and cleaning up the mess, everyone went about their daily lives again until…

A literal shit on the floor

Shit. Literal shit. The release of bodily fluids had upgraded. There was actual shit on the stairwell. In a block where every single room has an en-suite toilet. That’s 54 toilets and someone still shat on the stairs. Obviously, no one ever owned up to it but many people comment that the stairwell STILL somehow smells of shit months later. 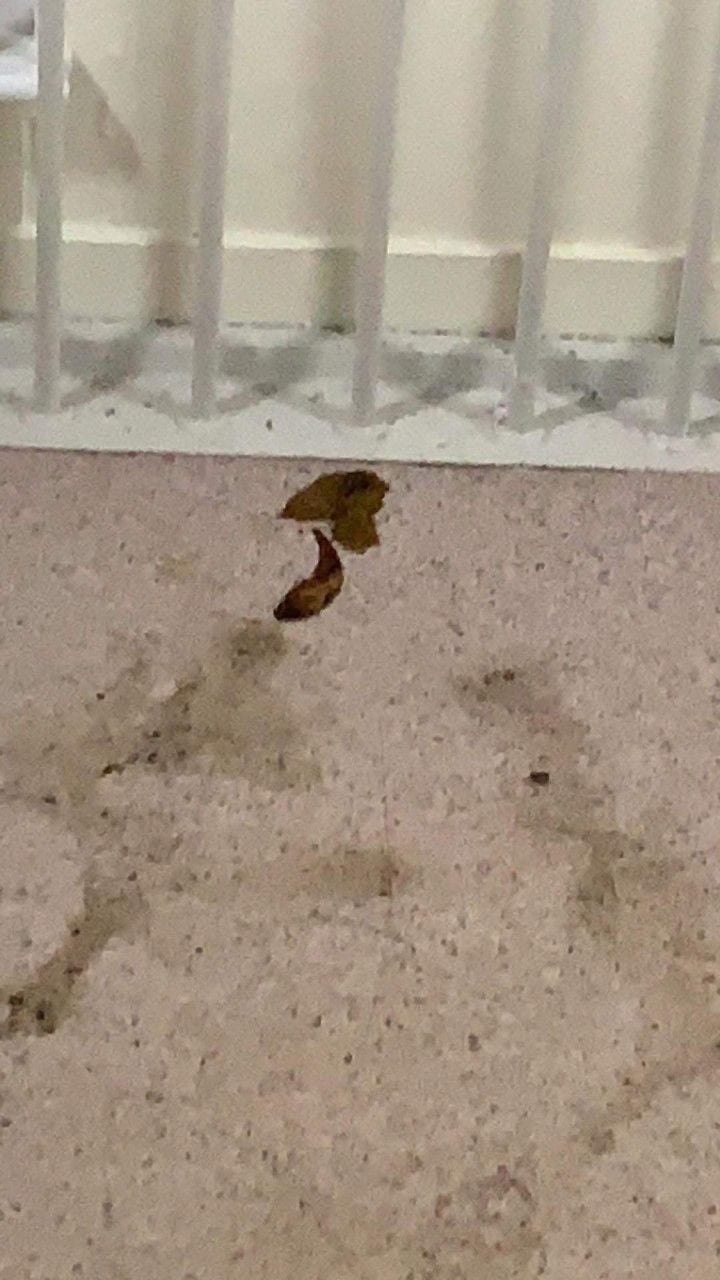 Is it even from a human?

For a while, things went quiet. That was until Christmas-D after a bunch of us returned from D-bar, asleep and snug in our beds, we received the wonderful wake-up call of a 4 am fire alarm. We stumbled down the stairs all still not fully sober and discovering no fire, it seemed the night would end there, but no, that’s not the P block way.

We could hear what honestly sounded like the block being bombed, turns out someone decided to drag a fire extinguisher not only up but also down the stairs, out of a window, along with some of their plates and the last shred of sanity P Block had left. 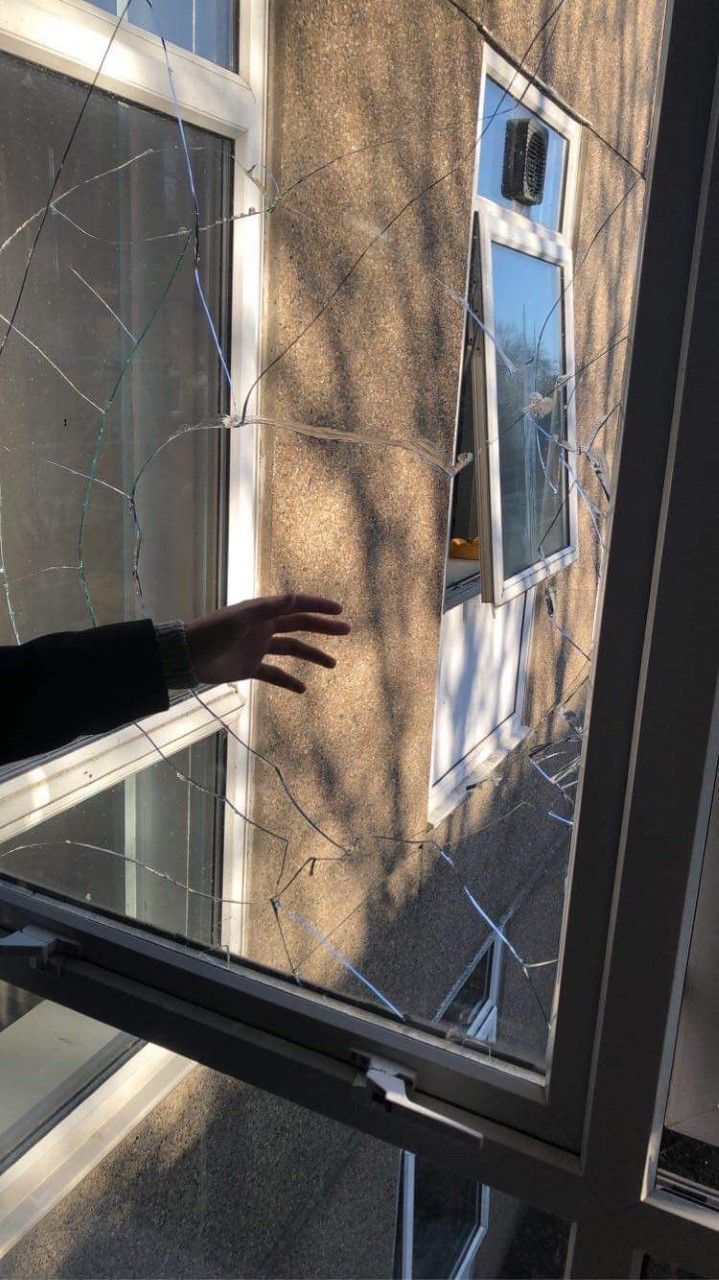 A sizeable hole was left in the window

The joys of Derwent!

To be fair to the culprit of the window mishap, he apologised a lot, paid a fine and won’t ever be able to live down the broken window saga. P Block is still one window down but at least the boarded-up window gives the block a bit of character and a great story to tell!

We even had a very educational message placed on sticky notes on all 54 doors in P Block, "STDs are a serious business" which, to be fair, they are, so it isn’t all shit and broken windows in P block, we even look after each other’s sexual health, even if it is in a strange, sticky-note form. 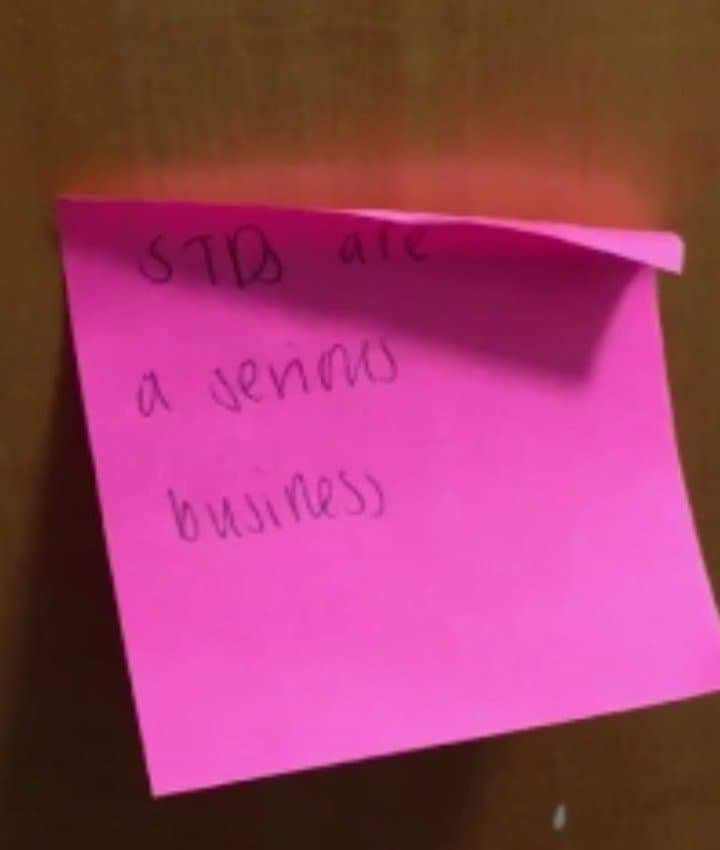 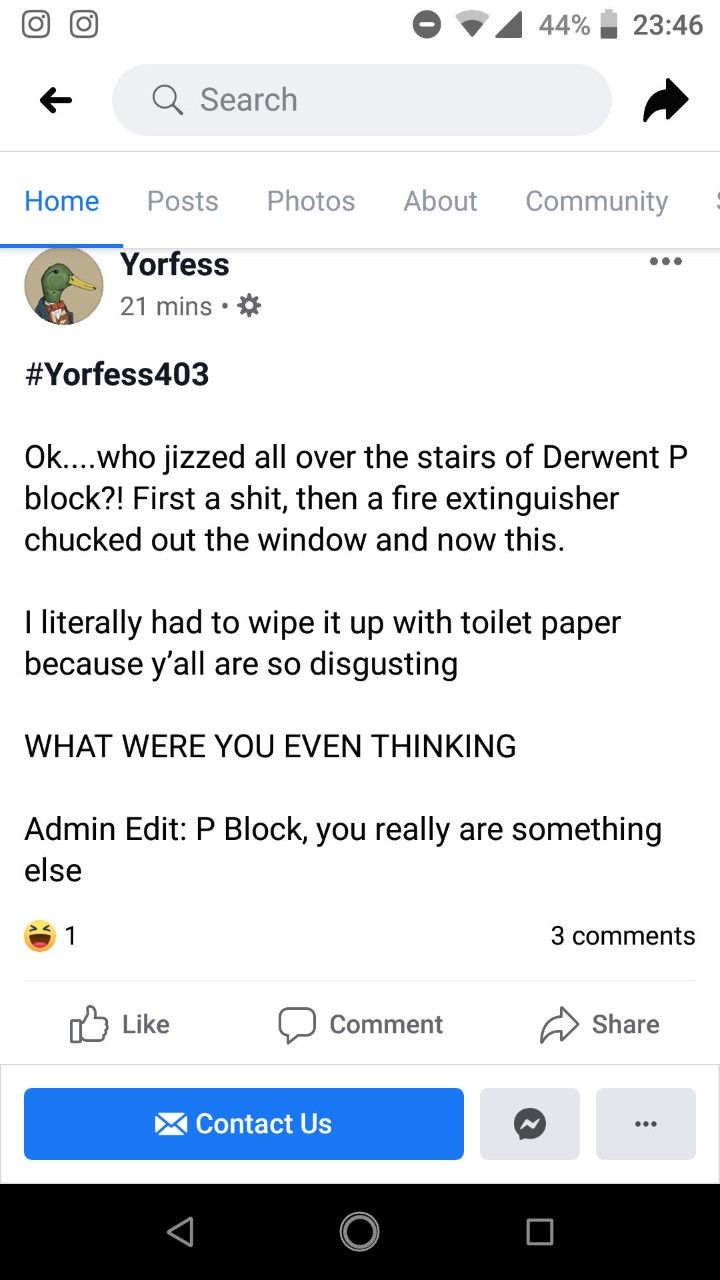 WHAT WERE YOU EVEN THINKING

All hope of leaving the Curse of P Block ended on Sunday night, someone thought it would be fun to draw a pentagram in fairy liquid on the top floor, dismantling all of the fire alarm covers and writing ‘Hail Nicky’ in the middle. Our guess is to pay homage to one of our residents who may or may not have been to blame for a certain broken window. Nobody really understands what or where this came from but we’re sure that it was just a joke rather than actual Satanists living in Derwent (we hope anyway). 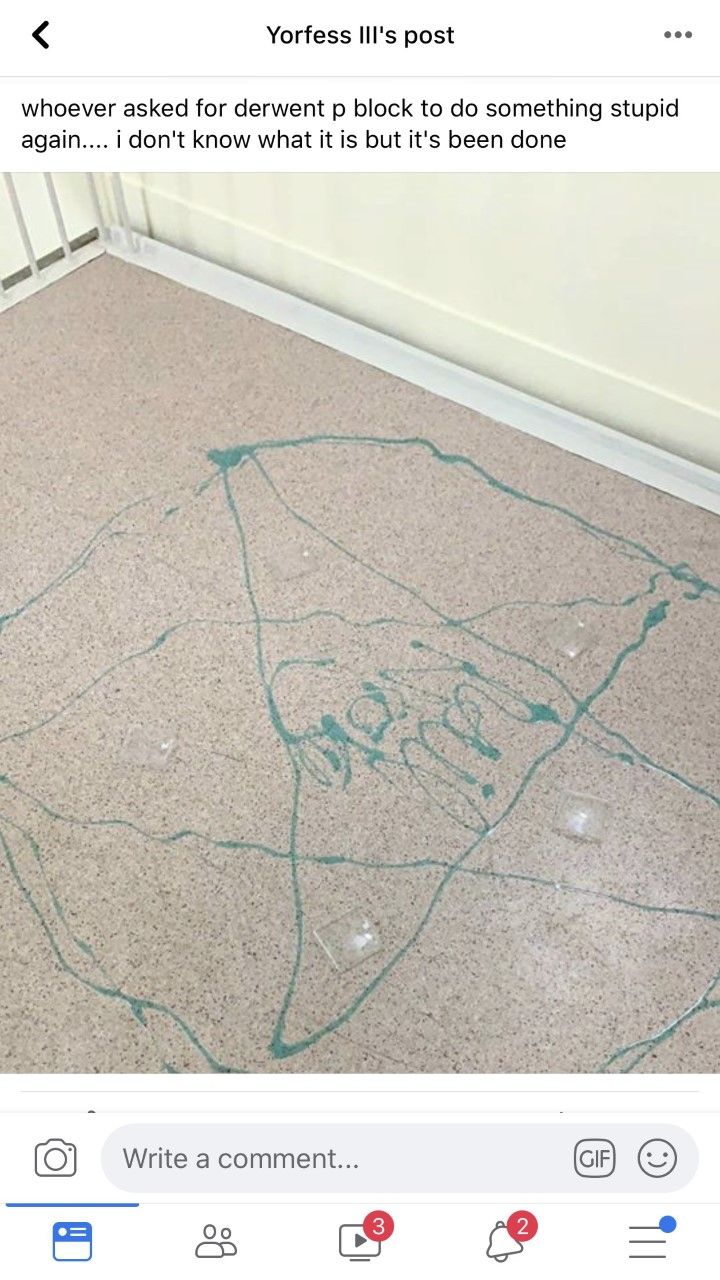 Not so fire safe

We thought that P Block's mishaps had finally ceased to exist but on Tuesday morning, the block awoke to another message in the group chat and a faint smell of burning

It seemed as though someone had strongly disagreed with the University's attempts of spreading awareness of the Coronavirus and so had taken it upon themselves to set the posters alight on a WOODEN DOOR. Thankfully (or maybe not, depends on how much you value your sleep), the fire alarm didn't go off again in the early hours of the morning, but we were left with an ashy mess and burnt glass to clean up. 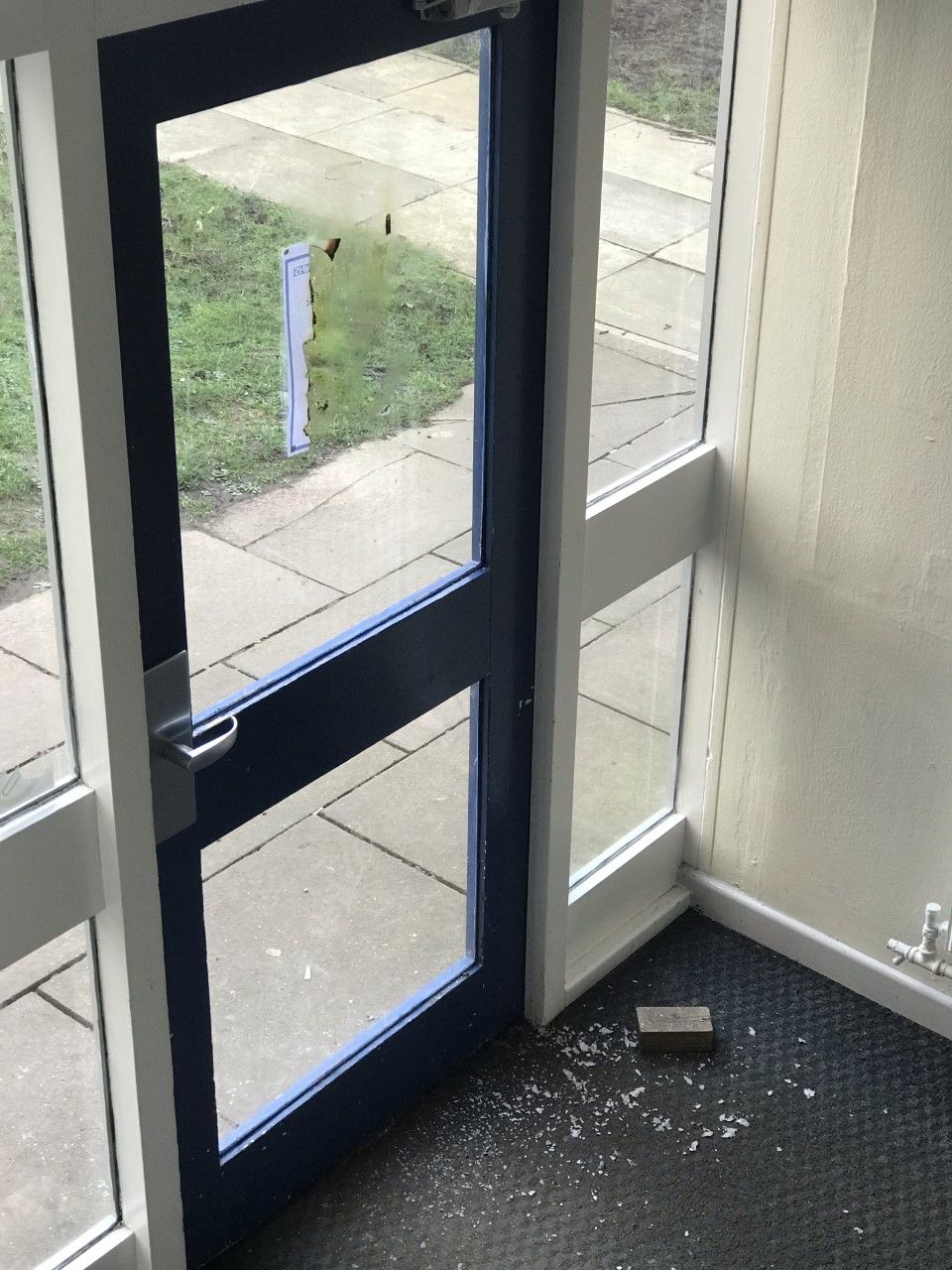 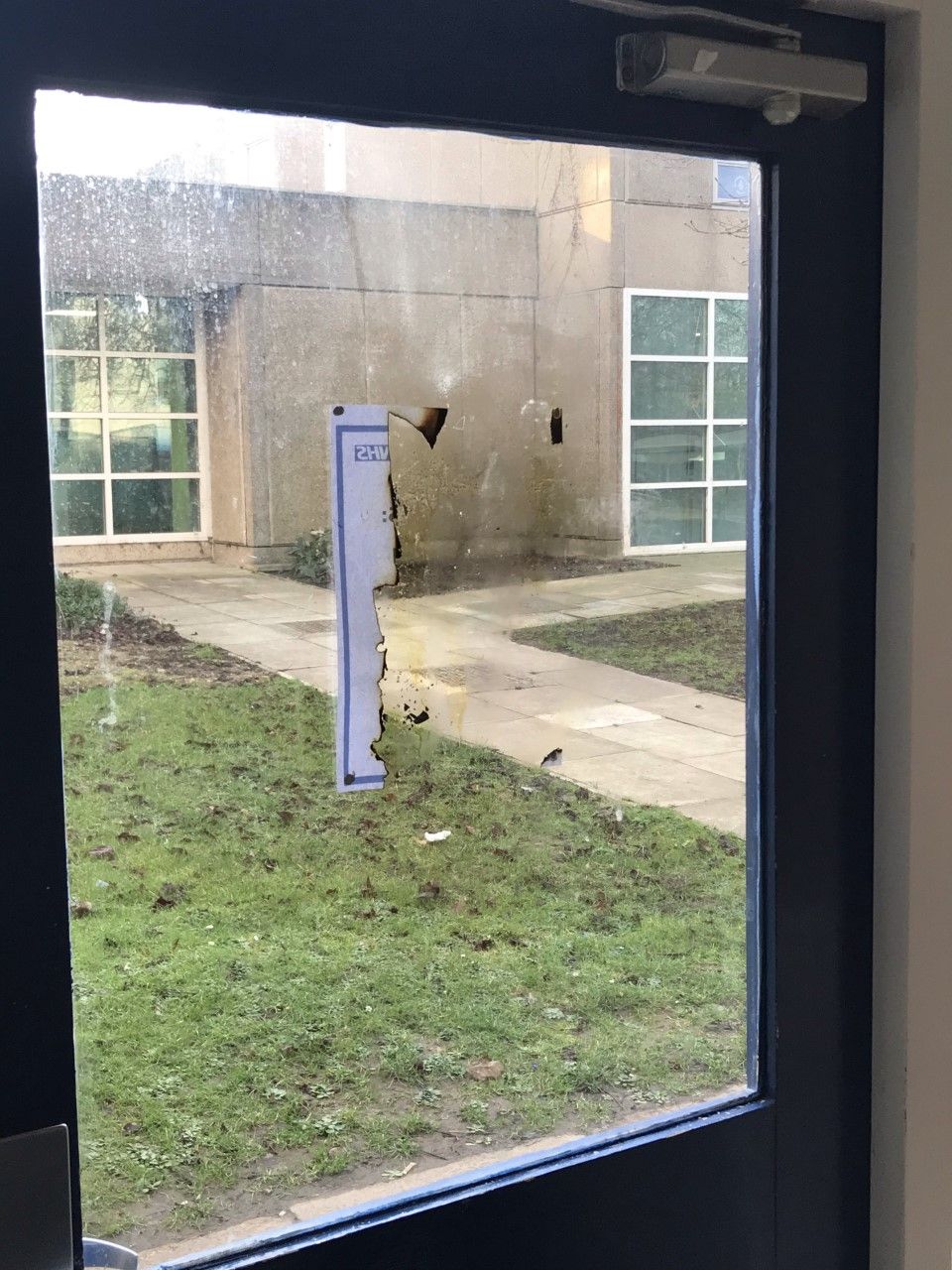 So we’re wrapping up this account of P Block but we’re pretty sure that this won’t be the last that anyone hears from York’s most notorious block. Even though this block may definitely be cursed, and we’re sorry for what we put campus security and the cleaners through, we really do love it anyway and wouldn’t want to be anywhere else.