Derwent nightclub to be called ‘Asbestos’

Yesterday we announced that the uni is looking to spend £200K building a nightclub on campus.

Since the announcement, a petition has been launched to have the proposed nightclub, which will be situated near Derwent College, to be called “Asbestos.”

The name is thought to be a thinly-veiled jab at what many perceive to be York’s least prestigious college.

The student, going by the name Ophilia Shlong (interesting choice of alias), who created the petition said:

“I feel that this is an important issue with regards to the University’s heritage, especially when considering Derwent’s ethos.” 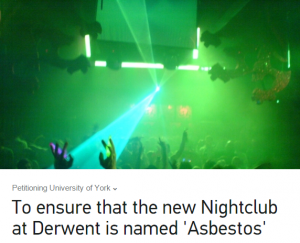 And you thought we were kidding

Other students have been quick to support the name.

Student Rory Mason said: “As a Derwent first year this is an issue close to my heart.”

And Jasper Hart strongly proclaimed that “Derwent needs this to survive.”

With only 52 signatures still needed for this name choice to be considered by the uni you should all go and sign the petition here. 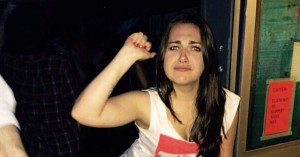 She wants Asbestos to happen

Other students don’t agree with the uni spending so much money building a nightclub on campus.

One student said “we have a perfectly good town centre filled with bars and clubs. Why do we need a campus club that only a couple of freshers will go to?”

The Tab want to know if you think a campus nightclub is a good idea. Vote in our poll.