Derwent rep posters a pain in the arse

Sexualised campaign posters for two of Derwent’s Merch reps have caused a fuss among students leading to them being removed.

Last week the college walls were covered with the posters of students running for positions on the JCRC, but some received more attention than others. And not necessarily the kind of attention they were hoping for. 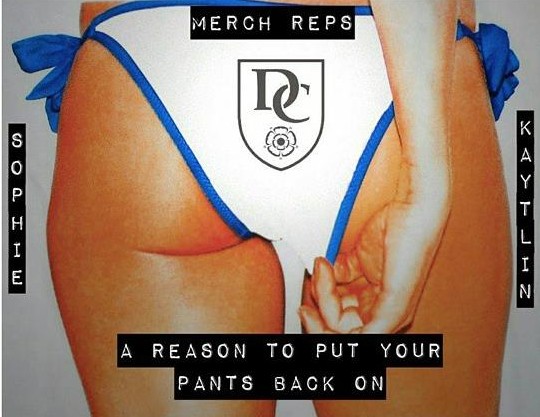 It’s unclear if Derwent will actually be selling knickers

Walking around Derwent it was hard not to notice the massive arse (mid-sorting out wedgie) that had been plastered everywhere. This was the image of choice for two female students running for Merch Reps.

And unsurprisingly, the University of York Feminists had a little something to say about it. Comments on their Facebook group criticised the sexual objectification of the woman’s booty. 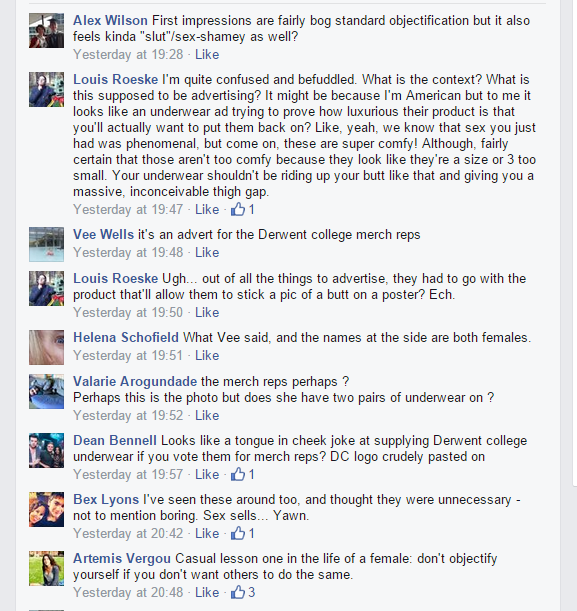 But the accompanying slogan, “a reason to put your pants back on” also caused some controversy, and a little confusion.

According to the poster, Derwent students are normally naked from the waist down and, coupled with the bum, implies it’s because they’re banging. A lot. This was followed by claims the poster was slut-shaming.

And it seems a large proportion of students were offended; the posters have since been removed, but after YUSU declined to comment it’s unclear as to who has taken them down. 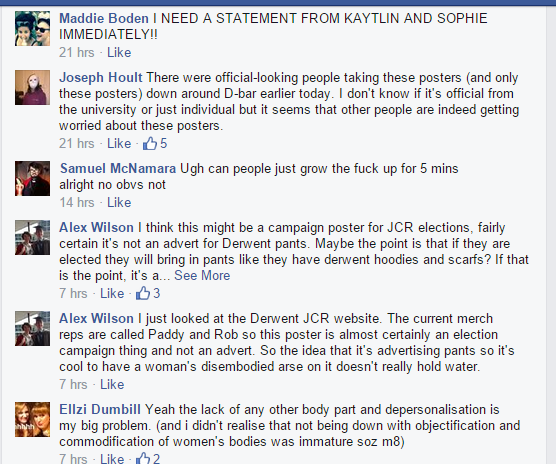 “Thank you for getting in touch about this issue. I am aware it has stirred a fair amount of healthy debate!

“From our point of view, we aimed to create a very bold and memorable campaign, albeit in bad taste, and I can completely understand how it may have been misconstrued.

“As two females, Sophie and I should have been more sensitive to the matter and in no way do we support slut shaming or the objectification of women. We are sorry to all we may have offended!

“It is important to remember that the context in which the image was used was for our campaign for Merch Reps, the main focus of which was providing Derwent underwear if elected.

“‘A reason to put your pants back on’ evidently plays up to the perception that students are having a lot of sex at university – especially given Derwent’s reputation as a “party” college.

“Yes it’s crude, but in no way does it propagate slut shaming as there isn’t a negative connotation in this instance to implying that women are sexually active/have their pants off in the first place.

“Although overtly (and perhaps unnecessarily) sexualised, the similarities between that and any other underwear campaigns in the wider media perhaps should direct the focus of the debate to the wider societal issues in play here.”

After a week of students kicking off about the scandalous posters, it turns out sex doesn’t sell, and the two girls running for the positions of merch reps didn’t win.

Maybe a photo of your tits next time?