Last weekend Langwith College played host to one of the emerging college varsity competitions against Durham.

After a vigorous tussle for points throughout the weekend on the sporting field, with the college rugby sevens and netball teams all putting in admirable performances, points were tied going into one of the final events, ‘University Challenge’.

Now with the University’s recent success over Corpus Christi College, Cambridge in national competition, the Langwith team must having been feeling confident going into clash against Butler.

From the outset this seemed to be case as the Langwith lads took a commanding lead of 120-60 in to the half time break. 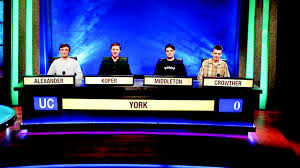 The boys showing us how it’s really done

But in true Durham style the Butler team came from behind to retake the lead 160-135 going into the last question.

Langwith needed to answer the starter for 10 and the 3 subsequent questions if they wanted to draw the competition. And they only went and bloody well did it.

This must have felt like a win already for the boys in Yellow, but the powers at Butler that be proposed a tie-breaker of a boat race of pints of Carlsberg as the whole varsity competition was now all square.

This was no longer a battle of intellect or sporting prowess, but of raw emotion, heart and whether one could open their gullet.

The following video speaks for itself. A truly shameful effort from the white rose warriors.

This loss at a discipline that many Yorkie rangers take extremely seriously has prompted a backlash from the student community.

A James college student was not surprised at the result, dismissing  the team as merely “a bunch of wetties.”

Whereas the victorious Butler team were reported to have gone out and “skited” (don’t bother asking) on their return to Durham, the Langwith boys were left feeling dejected, sad and most likely bloated.

What this shows is that when it comes down to it, pint consumption will always sort the wheat from the chaff, no matter what the arena of battle may be.