Chair is quick to quash rumours of misogyny

Two female members of The Lemon Press have walked out over supposed “lad culture” within the club.

But members are baffled as to their reasoning, and the chair insists he has done his best to “make sure there is no sexual aggression” within the society.

Former “dictatorial” committee member Alex Craven quit yesterday citing a plethora of reasons, including the appointment of a Social Secretary, and not being voted in as Editor.

Current chair Tom Murray said: “This isn’t the first time we’ve had difficulty with Alex, this goes back to last term.

“She snapped at a lot of new members when she was on committee. She’s dictatorial, causes friction, and had members considering leaving at the time because they thought it was an unhelpful working environment.”

And Tom believes her resignation is about the conflicting directions they wanted to take the satirical magazine in: “This is tied up in more than lad allegations. In her resignation email the lad clique thing was one of multiple gripes she had, and one of them was that she wasn’t Editor.”

Alex admitted in her resignation letter losing the Editorial position made her rude towards members of the committee: “Am I still salty over not being elected Editor? Yes, a fair bit, I can’t deny it and stay honest but it’s not why I’m leaving.

“But it has probably been the underlying cause of my brash rudeness towards you, Billy, Jake and the rest of the committee. And I am sorry that I did that, because none of you deserved my lashing out that way.” 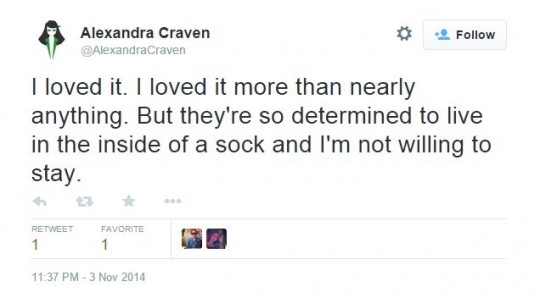 Tom explained: “The thing is the society is partisanly split. There’s an old guard that favours a certain kind of light-hearted satire, and there was a new wave of political satire.

“She was of the former camp, and there’s divergence in how she sees the society and how we want to produce the issue.”

Alex claimed some of the society was “laddish and hostile” in her letter: “While I believe that some like Billy and Branden are against that culture, I think you’d be lucky for most members of the society to even pay the barest lip-service against it.

She then went on to claim appointing a Social Secretary, a staple on most society committees, played into that culture: “From what I saw of the last meeting, even creating the Social Secretary position is going to strengthen the lad clique rather than combating it.”

The letter in full

But Tom Murray disagrees: “I don’t think it’s emblematic of laddish sub-culture, as socials can come under the banner of non-alcoholic.

“Also, the person that was appointed was a fresher and so wouldn’t be privy, or be heavily involved, in this kind of culture.

“We can’t overlook the society has a male majority. It always has, even with female based committees, and undeniably there are members that are loud and boisterous, but I’ve made a concerned effort to make sure there’s no sexual aggression and no misogynistic jokes.

And Tom was quick to smother any rumour that the publication has a relaxed attitude towards lad culture:

“There was a rape joke in an article that was sent in to us. We decided it was inappropriate, too close to the knuckle, and chose not to publish it.

“If you look at our last issue we even satirise that we are a male majority.”

Former Editor Tom Davies said Alex was known to be difficult: “She had numerous run-ins, and many members of the team found her difficult to work with.

“She also left the medieval society on counts of misogyny. You can get the impression of what she’s like.

“A lot of people getting irritated on Twitter are not even current members of the society. There is reason to doubt their word.”

Tom Murray said: “Alex never attended a social and never spent time with us outside of the society, and without any justification was unhappy to be around us full stop – and this was before we got to know her at all.”

The first girl, who we have chosen not to name, quit around four weeks ago after an incident at the Freshers’ Fair.

Tom Murray said: “There was an allegation of one of our members making a misogynistic slur during the fair.

“Five to six days later she resigned citing this. We had a meeting with her and she explained straightforwardly she felt uncomfortable. She gave impression she was aware it wasn’t malicious, just tactless.”

Davies said: “There are lots of men in the society and they can be quite boisterous. One of the guys rated a fresher out of ten at the fair. He was admonished by the chair when the incident was made clear. People were publicly spoken to about it.

“There was an effort to retain the female members after that, after the hangover of people graduating last year.” 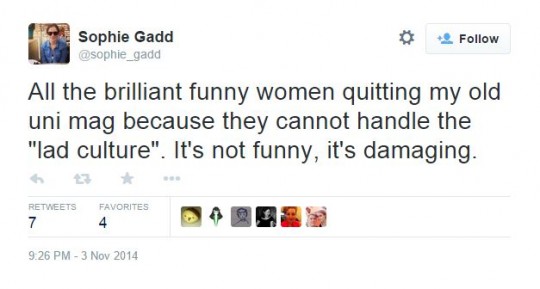 But the man accused of the slur denied saying such a thing. Murray said: “I spoke to the man she made the allegation about and he flatly denied it. Left me in a he said/she said situation.

“But I took precautions and spoke to men in the society and forewarned them about using misogynistic language or anything that could be inferred as misogynistic.

“Honestly, I think this is because we’ve hardly spent any time together as a society.

“We’ve spent a total of about an hour together, most meetings were very short.

“We haven’t even gone to print yet.”

One message said: ‘She is used to my casual racism. I do it all the time’

A love letter to Tang Hall: The best place to live in York

Do one, Fulford x

‘Save D-Bar’: Students set up petition to save D-Bar

It currently has over 400 signatures

New club Ziggy’s to open in York next week

Salvos is back: Here’s what we know

It will reopen on Wednesday 21st July

Kuda is back: Here’s what we know

The college I’d like to couple up with is…

‘I feel isolated and alone’: Almost half of York freshers regret coming to uni this year

The protesters said the eviction was ‘violent and illegal’

All the support networks available to LGBTQ+ students in York

Whatever you are facing, there is plenty of support available

Not to brag but I’m kind of an expert

And the 18th best University in the UK