President tells dissenter: ‘I don’t want any more from you’

A fresher was removed from the University of York Feminists Facebook group after mentioning false rape accusations in the “safe space”.

And President Alex Wilson justified her decision with her definition of feminism: “Feminism at the end of the day is about women and making life better for them.”

Muwahhid Abbasi was removed because he broke their comments policy by bringing up false rape allegations. Alex Wilson said: “We need it to be a safe space for survivors of sexual assault.

“And anyway false rape accusations are only 2% of cases – why are we even talking about them?

“We remove people who make it an unsafe space for oppressed groups. You can criticise it as a censoring of free speech if you want, but that is what is necessary. We agree with censoring free speech if that speech damages people.” 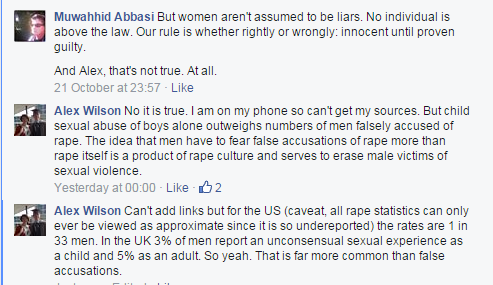 Muwahhid was removed from University of York Feminists and his comments were labelled as “misogynist garbage” when he disagreed that men are more likely to be raped than falsely accused of rape.

Another member asked for citation of the statistic provided by the President. Alex did not provide a source as she was on her phone: “I was away from a computer and on my phone, so couldn’t provide the exact links.”

She gave statistics of male child sex abuse, to which the first-year responded: “I thought you meant fully grown adults, which I know is not. However, just because abuse of male children outweighs false rape claims doesn’t mean there aren’t lots of false rape claims. There is a lot of child sexual abuse, of both males and females.”

The President replied: “No that is misogynist garbage. Sorry we don’t allow this kind of thing on this group. I don’t want any more [words] from you. This is a safe space and the rights of survivors are placed above the rights of whining about imaginary ‘false rape accusations.'”

He was then removed from the group without further discussion. She said: “We took the decision that he wasn’t going to let this go if we explained it to him and we needed to remove him for the safety of other people in the group.”

When asked if she thought it was fair to remove him without explaining to the confused fresher she said: “No I don’t think it’s my job to speak to him, and take it out of my personal time.

“If I was getting paid and it was in my job description I probably would, but this is voluntary.”

According to RAINN, an American charity, 1 in 33 men have been victim of rape or attempted rape, while the US department of Justice says false accusations are “are estimated to occur at the low rate of two percent.”

Muwahhid joined FemSoc because of a genuine interest in feminism.

He said: “My intention was to post to the page weekly about something on the issue, and see the response.”

“A member posted ‘Fact: you’re more likely to be raped as a man than receive a false rape allegation.’

“Other members and myself asked for a source. The person who posted the comment said they couldn’t supply a source now as they were on their phone and would do it later.

“They then changed what they said to what I understand to have meant ‘you’re more likely to be sexually assaulted as a male child than receive a false rape allegation’.

“I merely then commented that we shouldn’t dismiss one problem because another seems more important. Then it all kicked off.” 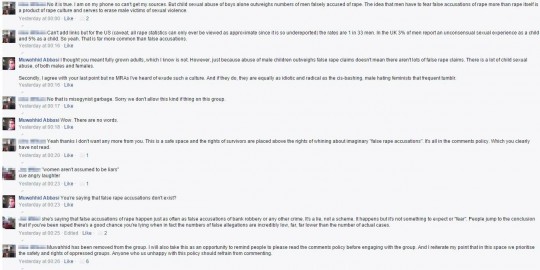 After strong-worded comments from FemSoc members, the fresher’s final comments before being removed from the Facebook group were:

“This branch of feminism is very extreme. You don’t see such extreme views besides on dark side of Tumblr.”

But Muwahhid didn’t expect such to be removed. 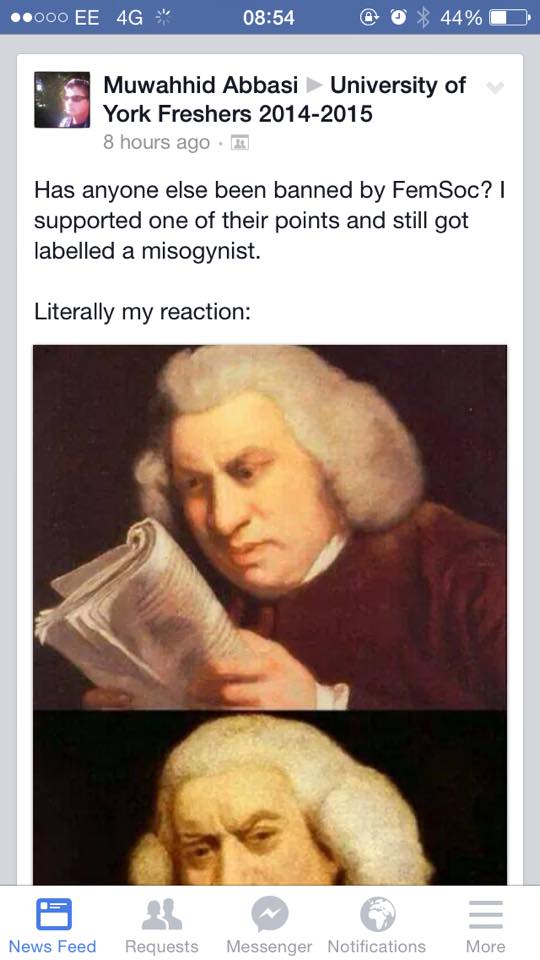 Confused why he was kicked out

“The person in question would be aware of this if they had read our comments policy, which can be found on the Facebook page. The Facebook group has the primary function of communicating with interested people about our discussion groups and other events being run.

“The person in question was removed because they broke our comments policy. They were not removed due to the comment you have quoted but because of several comments he made about false rape allegations and because of a specific comment which flippantly and without evidence, disregarded the existence of male victims of sexual violence.

“His comments expressed misogyny and disdain towards victims of sexual violence of all genders. University of York Feminists operate on a Safe Space policy. Ultimately this means that the safety and comfort of oppressed groups are our paramount concerns.

“This means that people who make comments that contribute to a negative or unsafe atmosphere for oppressed groups are removed. This was the reason they were removed, for oppressive and misogynist statements against survivors of sexual violence. We stand by their removal and are committed to ensuring that views of this kind are not given a platform on our Facebook page.”