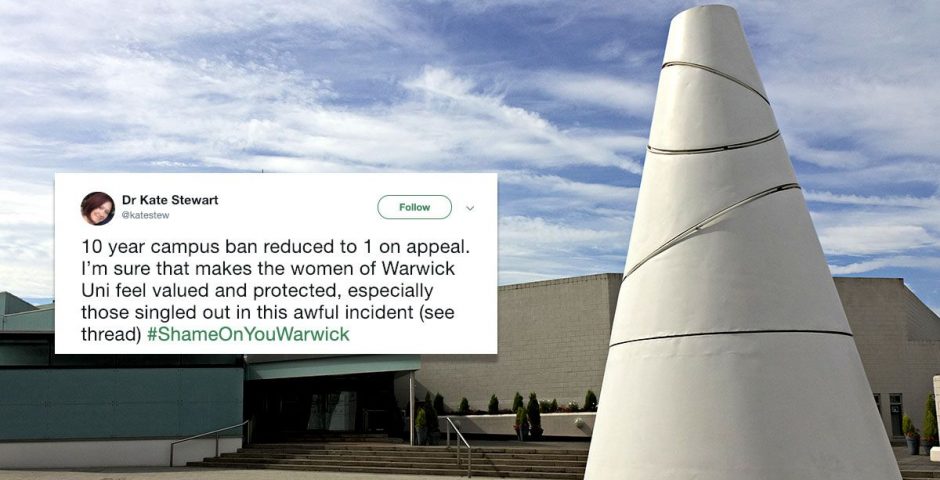 ‘Shame on you Warwick Uni’: Thousands speak out about Warwick’s failure to punish the group chat boys

‘I feel completely ashamed to associate with this institution’

Students, parents and members of the public have taken to Twitter in support of the victims of a group chat which made threats to rape and mutilate fellow female Warwick students.

The tweets come as a reaction to the news that of the eight boys who made comments such as "sometimes it's fun to just go wild and rape 100 girls," and "she looks like a rape victim," six would have their punishments reversed and will be back at university next academic year.

The boys were also involved in a second group chat called "Boys 2.0" in which they showed no remorse for their initial actions. One student who said "cannot wait to have surprise sex with some freshers" in the original group chat, said "let's do it all again".

The Hashtag #ShameOnYouWarwick began trending on Twitter after Twitter user, Meg Wain, posted the transcript of the comments that the boys made. The tweet has since received over 19,000 likes and 6,000 retweets. When the story originally broke, The Warwick Tab spoke to 28 girls who said they felt unsafe and threatened on campus.

Further victims of the group chat took to Twitter to share their response and reactions to the situation.

The university responded to the social media storm on Twitter, however users have felt that their response has not been sufficient:

A group of Warwick uni lads make a chat about how they want to rape you and mutilate girls you know, admit that they’d do it again and still get invited back with open arms the following academic year. Nah I’m mad

These tweets came from Nicole, a student who was named in the chat and was discouraged by the boys from taking further action.

This is absolutely vile! Warwick was one of the uni’s on my A Level age son’s list to look at, it’s definitely NOT now.
Shame on you @warwickuni, shame on you for allowing this absolute scum back on your property. https://t.co/8v1ShRZJKM

Literally just goes to show all universities care about is money, league tables and reputations. No comment from the university and reducing a 10 year ban to 1 year??? Can't even imagine the fear some of the students of Warwick University must be feeling.

Don’t go in the tour if you’re either female or just don’t like rapists. This terrible university can’t even expel wannabe rapists properly. No one should send their kids to this shit place. #ShameOnYouWarwick

When I was pregnant, I used to go to Campus while my OH taught at Warwick. I took my newborn once. I felt safe and comfortable. Seeing their support for this abusive, threatening, misogynistic, racist behaviour has shown me my impression was very wrong. #ShameOnYouWarwick https://t.co/a4Wvf4Rf9u

Not good enough @warwickuni. If u r going to knowingly put women at risk of rape by rapists & condone racism u need to explain and justify ur decision which is beyond belief. Whoever made that decision needs to be held to account #ShameOnYouWarwick

@RussellGroup I suggest you remove @warwickuni from your association. No institution that allows rape threats, racism, anti-semitism and pedophilia to be brushed under the carpet deserves to be applauded or granted a leading position in their field. Vile. #ShameOnYouWarwick

Glad to know in a few years time I won’t even think twice about going to your Uni because you are the shittest Uni I have ever seen in my life. You should be ashamed. It’s alright you probs won’t be open for long if people don’t come. Get the rapists ban. #ShameOnYouWarwick https://t.co/jxSK0fphxp

10 year campus ban reduced to 1 on appeal. I’m sure that makes the women of Warwick Uni feel valued and protected, especially those singled out in this awful incident (see thread) #ShameOnYouWarwick https://t.co/3NDJq0S6cb

"rape the whole flat to teach them a lesson"
Absolutely shocking and disgusting. @warwickuni How can you reduce their ban and just allow them back in? Why are you allowing your students to feel unsafe like this? ALL ACTIONS HAVE CONSEQUENCES. This makes me sick #shameonyouwarwick https://t.co/Ga4RFmtsFn

Get this all over Twitter please. Uni is hard enough as it is but this makes every girl feel like she is a future victim. #shameonyouwarwick https://t.co/dQ9zL8JMFc