The Exhibition is ongoing at Millburn House until the 20th June

On the 31st April, the Millburn House Exhibition commenced. The exhibition showcased the work of over a dozen artists who had taken the Practical Art module, as part of their History of Art degree.

The opening of the exhibition saw bottles of Prosecco popped and glasses of wine poured, while Paul Smith, head of the History of Art Department congratulated all those involved, declaring "this is the best exhibition displayed thus far" and that "the quality of the work is incredibly high this year." 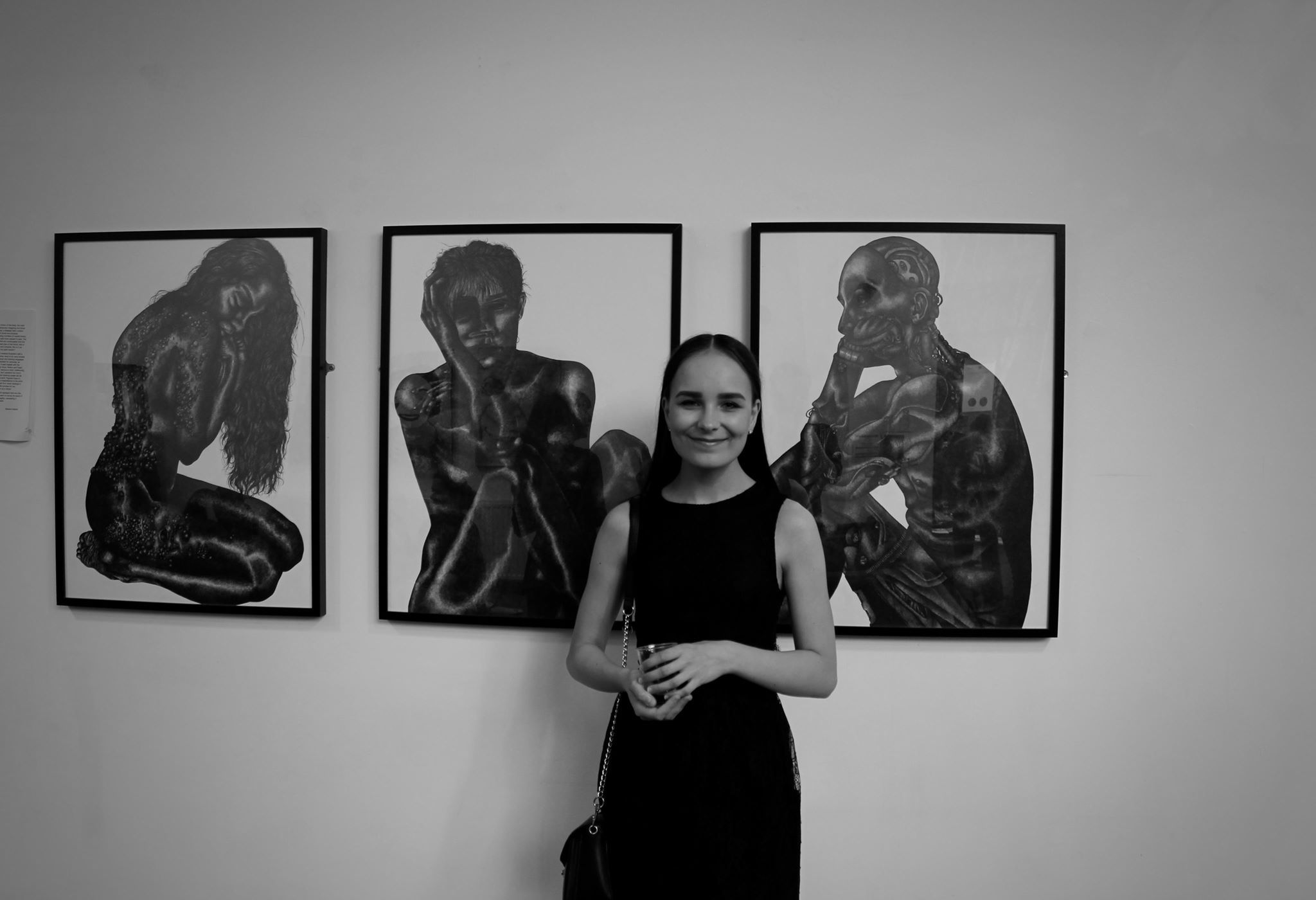 The work displayed was of stunning quality, with a variety of mediums being displayed, from paintings, to drawings, collages and even video installations. The works depicted an array of narratives: from life at Warwick University, the female form, struggles with mental illness, to the migration of a family from India to England and even commentary on the human condition itself.

The module was condensed to ten weeks, from the original twenty, making it rather intense. Victoire Becker, a History of Art and Italian student explained that everyone had to really dedicate themselves to their work, grafting from the Easter holidays over to the Summer term.

During the first four weeks, each artisan would have to experiment with a new form of media, from large-scale drawing to mono-prints, and collages created using recycled materials. After this, the remaining six weeks would be dedicated to each student’s project, in which they would have to form an idea, fine tune it and create it. 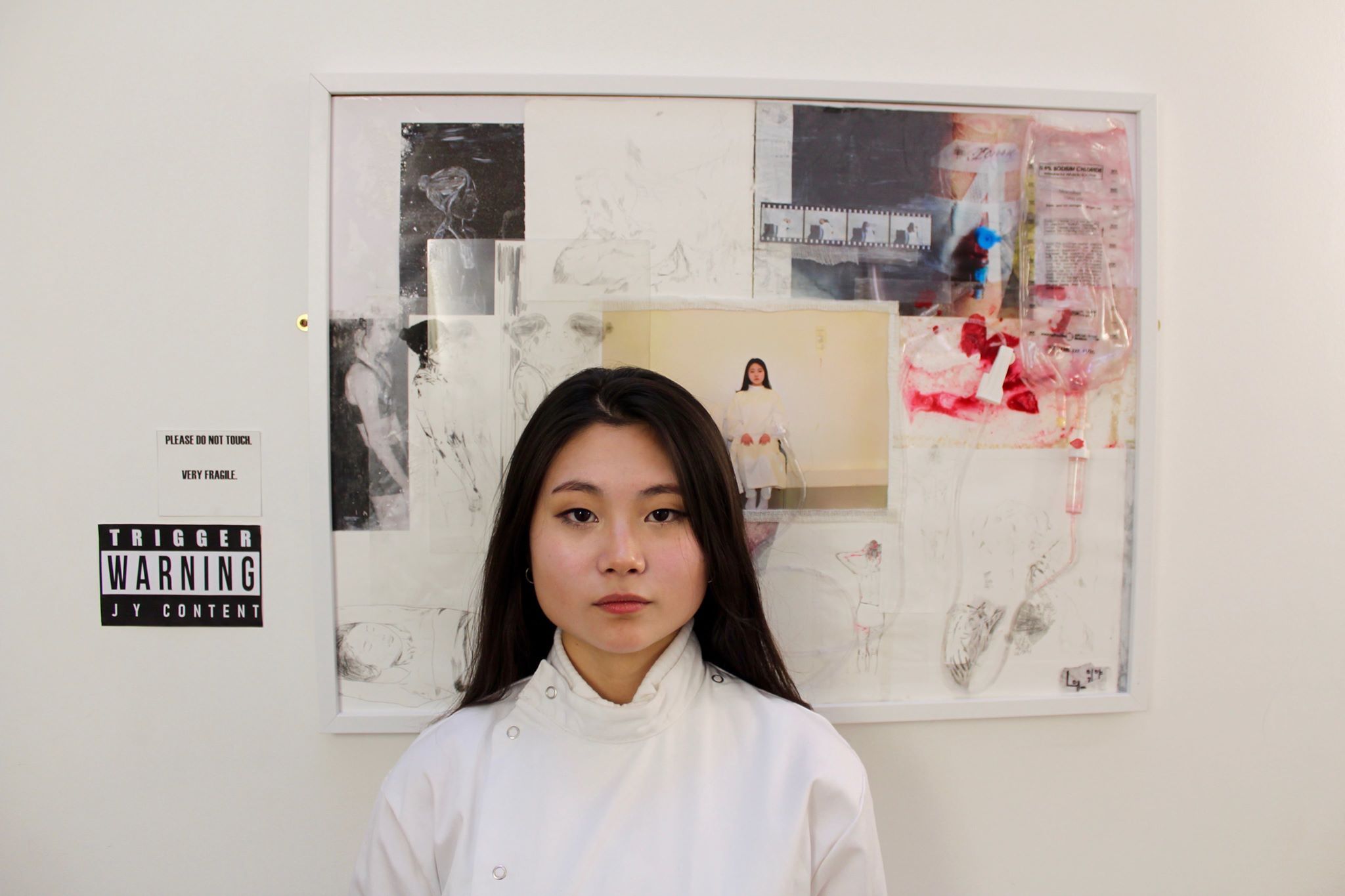 The module involved those not taking it as well, such as Issy Humphreys who found herself modelling in the nude for a painting. She described the process as being at first "slightly daunting," but at the same time "a lot of fun”. She went on to comment that ”the feeling of being photographed naked creates a level of vulnerability, you are being seen without the comfortable disguise of one’s clothes. This vulnerability is portrayed by Carolina (the artist) in her paintings as she lets our personalities and identity unfold from our surroundings rather than by via what we wear.” 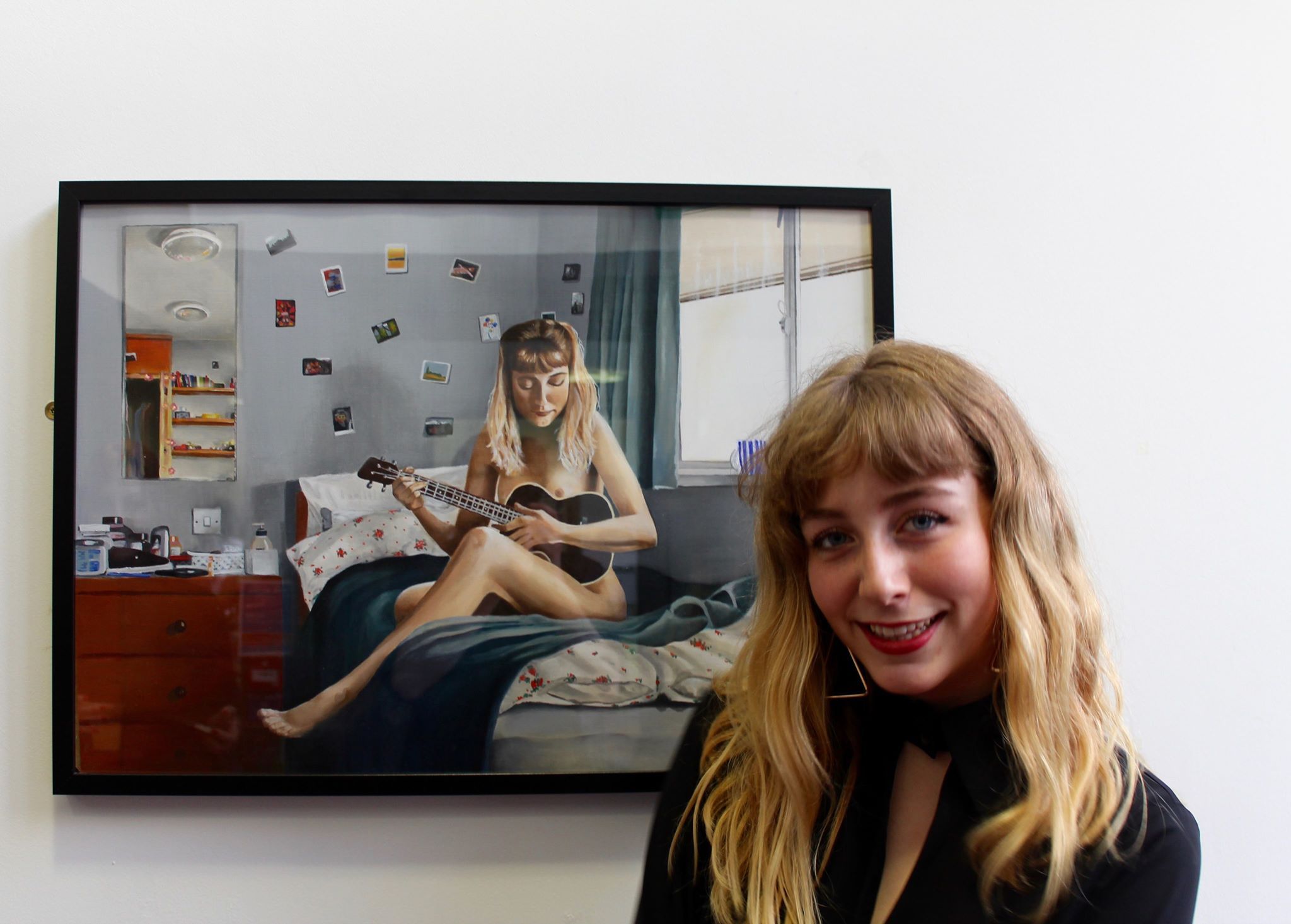 Charlotte Smith stated that "the exhibition is a testament to the creativity and individuality of my fellow classmates. I particularly like the range of styles which, managed to create a diverse and exciting exhibition." 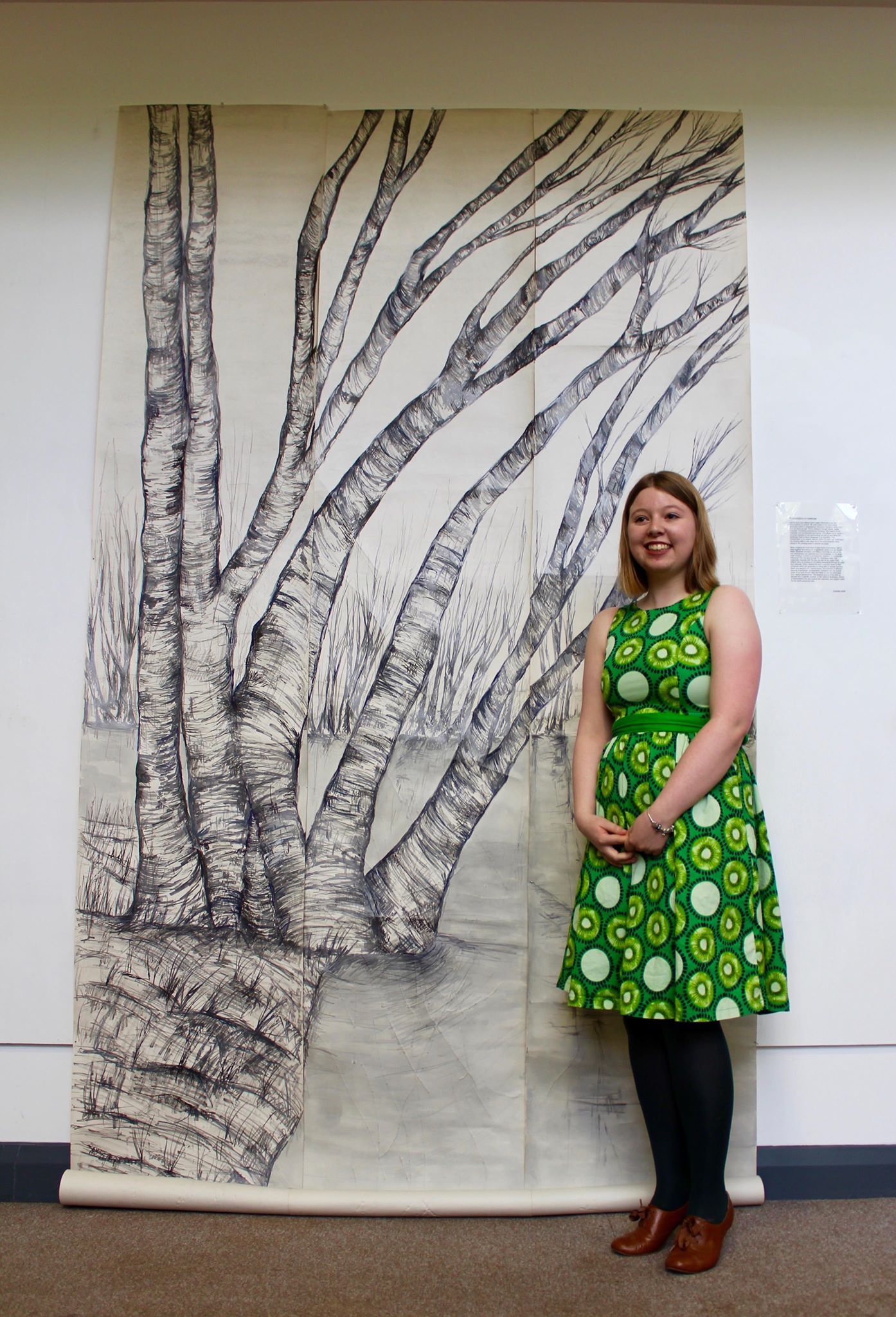 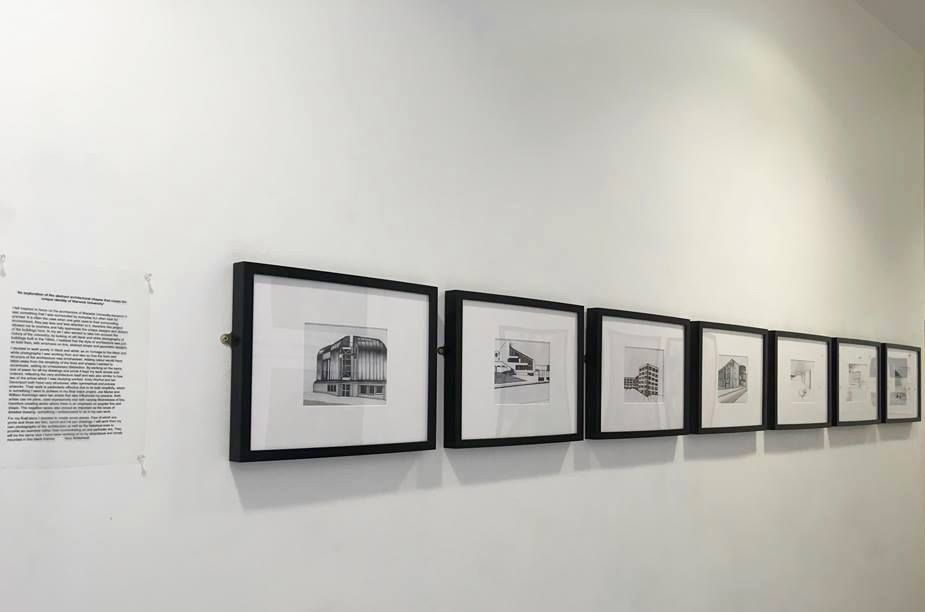 Carolina Sagardoy's artwork involved a nude painting of Issy Humphreys. Below is an interview with her.

Q: Why did you decide to take this particular module?

A: “Well, since I was very young I’ve always wanted to study the fine arts… it was my dream. I did a foundational degree in fine art at the Cambridge School of Visual & Performing Arts. Although I enjoyed this experience, I began to prefer the study of the history of art, which is why I decided to come to Warwick. However, I missed painting a lot. I’ve always been creative and painting has been something that relaxes me greatly. I believed that the module would rekindle this feeling and become more of a hobby than work, allowing me to have fun with it.”

Q: Why did you choose to use oil paint?

A: “I’ve always painted in oil. I love oil painting; I think it’s the best medium. You can just paint super accurately, whether its textures, faces or anything else for that matter, just in a much more detailed way. So I knew I wanted to do painting in oils as it’s the medium that best works for me.”

Q: How did you pick the theme of this work?

A: “I decided to do environmental portraits as I’ve never painted faces. I’ve always struggled with this a lot and have just avoided it. I thought as a challenge I would try this. Also, I was extremely curious on how one paints bare bodies, so I thought that an environmental portrait would enable me to accomplish these two ideas. I decided to do portraits in each person’s room, as I wanted to show each model's personality. I told each model to… leave [their space] as it was with make-up or laundry, as I wanted that messy vibe, the everyday room. All the models rooms were very different. For example, Klaudia’s was a super bare room, she had no decoration on the walls and unpacked boxes on the floor. Whilst Issy’s was completely the opposite. Every single window was plastered with pictures, fairy lights, pink stuff or glitter. Each room had its own personality and matched the portrayed person quite a lot.”

Q: Was there any particular method or elements that you decided upon when creating your work?

A:  "I started by taking various pictures of the models in different parts of their rooms. I eventually decided to keep each person in a similar spot, so that each work could be easily compared. This was the bed-scene. After this I selected the three best photographs and edited them. For the painting I did actually decide to remove some objects. I believed that these would either crowd the work too much or that some components wouldn’t work out because of the colour. For each of the models I tried to use a different colour pallet to express each different personality. For Ana I used more dark, reddish tones to match her elegance and charm. Klaudia presented a nostalgic feeling, so I wanted to use cooler colours, i.e. blues, greys and greens. Whilst Issy gave me a more innocent air, she was quite shy, so I decided to include more pink.”

Q: During the creation of your pieces was there anything that you particularly had difficulty with?

A:  “I did struggle with proportions and faces quite a lot! As I’ve mentioned before, this was the first time that I have worked in these areas. I did start with multiple sketches beforehand to practice this, however, this didn’t work out as this was in a different scale. Although, the great thing about oil painting is that you can paint over it. When I didn’t like a face I could let it dry and literally redo it. Another issue I had was that the colour of the canvas kept changing. When I finished one of the paintings, in England, I took it back with me to Spain and I found that a few days later that it had become lighter in colour. I had to keep painting over it, constantly editing it, adding swatches of glazing."

Q: Finally, what did you think of your project overall? Were you happy with the finished product?

A: "I painted exactly what I envisioned. At first I wanted to paint in a more hyper-realistic way, however, I realised that I was painting in a more figurative way, leaving brush marks, etc. I actually prefer this, as you can see the process of the artist, rather than it looking like a photograph. The opening of the exhibition was great, everyone was happy to see the finalised works, the models and I took pictures together and it was just awesome!"