Warwick Uni cancer-patient describes £50,000 crowdfunding for his treatment as a “beautiful thing”

He’s overwhelmed with all of the support he has received

Yesterday, Warwick student Alexander Paul met his £50,000 target for his treatment in his fight against stage four brain cancer. The Tab spoke to Alexander and his mother Joanna who told us how overwhelmed they are with the tremendous support his story has received.

When did this all begin?

In March 2016, Alexander collapsed and suffered from a seizure, leaving him in a coma for three days. Joanna described the incident as being a total shock as Alexander had been fit and healthy prior to the episode. He was due to go on a trip with the University to Belgium, which coincided with the Brussels suicide bombings of 22 March 2016.

Joanna said: “I received a phone call from the University reassuring me that Alexander and the other students were OK following the bombings, however I responded saying that I knew that he was unaffected by the bombings because I was with him in hospital.”

How is the treatment going?

Just two weeks ago, Joanna accompanied Alexander to Germany to receive treatment for his cancer at an alternative clinic. She explained how the approach to Alex’s treatment differs greatly to that in the UK.

Hypothermia treatment is a method based around heat, as cancer cells are strongly believed to be adverse to heat which assists in weakening the cells.

Joanna said: “The German clinic offers a holistic approach. This involves using a variety of different treatments, including having regular infusions of vitamins and enzymes and regular physiotherapy sessions.

“The main reason for going to the German clinic was because they offer the most advanced alternative cancer treatments. We sought to receive the hypothermia treatment that Alexander is currently undergoing.”

Alongside the alternative cancer therapies, Alexander is also undergoing conventional treatments such as chemotherapy and radiotherapy.

How does the treatment differ to that under the NHS?

Alexander said that because they used such different approaches, it was hard to compare. He is very appreciative of the treatments offered under the NHS, but they decided to look at other options only because he had been diagnosed with such an aggressive form of cancer that did not have a positive prognosis.

At home, Alexander had been struggling with the side effects of the cancer, suffering with a considerable amount of pain. However, Joanna said that since undergoing the alternative treatment in Germany “Alexander was pain free, having only had one painful day since arriving at the beginning of the month.”

How did you come to the decision to start the Just Giving page?

Joanna’s childhood friend, Barbara Walter-Ennis had created the page on their behalf on New Year’s Day. Joanna explained: “I was upset at first when Barbara told me that she created the page as she hadn’t told me about it, I even asked her to shut the page down.

“We had only told close family and friends of Alexander’s diagnosis and by making a crowd-funding page, his illness was no longer a private event.

“I soon recognised the huge benefits of the page, as I began to appreciate just how much money was going to be needed to fund Alexander’s care in Germany – especially as I had tried to sell the house, but with no luck.”

How does it feel to have reached the target?

Alexander and Joanna have been completely overwhelmed with the amount of support that they have received. They were both in shock that the £50,000 total had already been met. Joanna said it “took the worry away”, as it is likely that Alexander will need to receive three or four further bouts of treatment in the German clinic.

Alexander added that he is appreciative and moved by the amount of donations and support that he has been given by friends, family and strangers alike. He described it as a “beautiful thing” and amazing that strangers could be so caring and supportive of him. He said it was heartwarming to see people coming together to support a cause, albeit in negative circumstances.

The University of Warwick has also been highly supportive of Alexander, providing him with funds of £850 to help him with his finances, expressing that the University “has been amazing”. 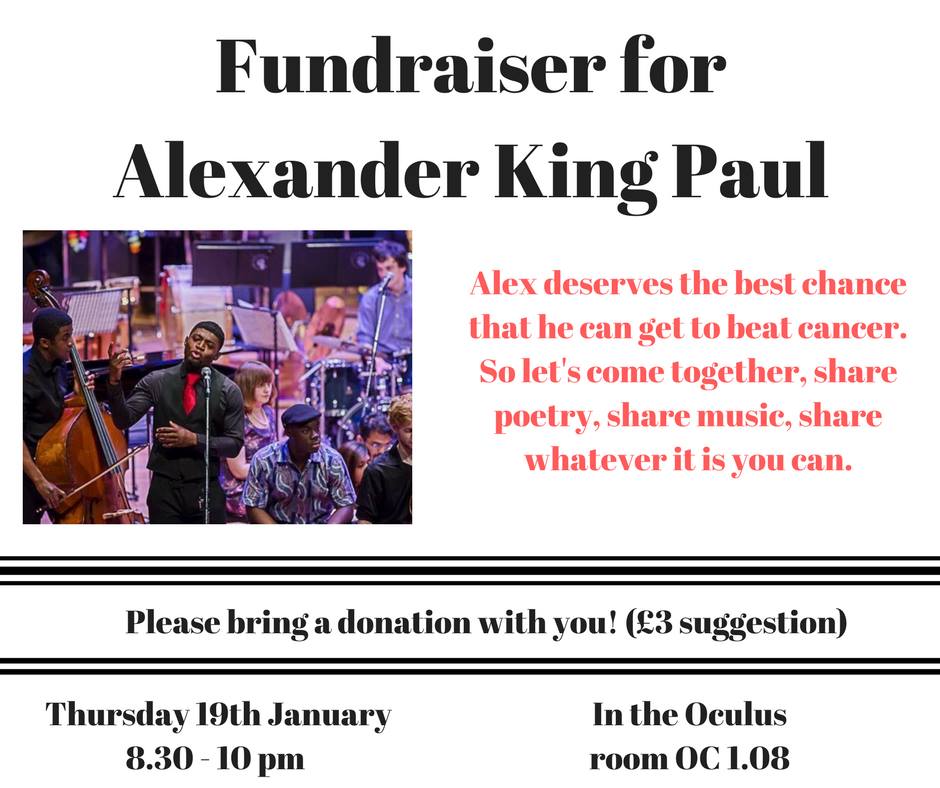 He said: “During the two years that I was at Warwick, I was an active member of a number of societies. The HipHop society, Warwick Entrepreneurs and Warwick Anti-Racism society have all provided me with support.

“Some of my friends have told me that they are organising a performance of spoken word and art to help raise money towards my treatment.”

Alexander has also received support from some celebrities, notably Lauren Pope from the reality TV show The Only Way Is Essex and the girl band Little Mix.

He said: “It makes me feel amazing that famous people are getting behind the cause. For them to spread coverage and publicity is incredible, regardless if they donate or not.”

“The messages of support from Krept and Konan was very special as they are from the same area as me and have always been a positive role model of mine,” he said.

Finally,  Alexander said that he greatly admires our Prime Minister Theresa May: “She’s doing a good job at a difficult time”.

He added: “I have spoken to her since giving my speech at the Conservative Party Conference in 2014 but we don’t speak often because she is a very busy woman. She wished me the best of luck with my treatment just before the New Year.”

Alexander would like to thank everyone who has supported him and who have shown generosity by donating towards his treatment. He wished to give a special mention to his close friends Timothy Armoo and Joshua Adejokun who have supported him throughout.

His Just Giving page can be found here.