‘I felt violated, dirty and in a lot of pain’

Yesterday it was revealed the University of Sussex took eight months to deal with a female student’s domestic abuse complaint. In this same time period, and beyond it, Sussex University was also taking its time with another complaint. From November 2019 until last week, Sussex was looking into a rape complaint. It took a year and three months to uphold this complaint, by which time both the survivor and perpetrator had already left the university.

Emma was in her second year at the University of Sussex when she met her abuser back in 2016. In that same year, they got into a relationship and Emma described him as the “first person to ever show interest in her.”

At first, he was “very patient, but very quickly became violent in bed”.

“He used kinks as an excuse to be violent and he took joy in making me uncomfortable”, Emma said, “often doing things I specifically asked not to because that made him want to do it more. He told me he fantasied about causing me grievous bodily harm. He also made light of my own mental health issues.”

Emma reported her abuser on 10th November 2019. She told The Sussex Tab: “For the report, I had to collate evidence which involved revisiting a lot of trauma and having to bother my friends for details they remembered and personal reports. This was extremely difficult as the abuse was covert, to the point where I had no idea it was happening until after. This is why I didn’t report it to the university whilst I was a student there. When I had figured out what happened to me, my main focus was survival and I was forced to leave university in order to survive.”

It was during their relationship that Emma was raped by her abuser. In her testimony and report to the university in 2019 she recounted: “After ignoring me for weeks, he got extremely drunk on a group holiday and initiated sex with me. This put me in a very vulnerable position in a communal space whilst he remained clothed. Once our friend in the next room had left, he became more violent and I began to protest as I became uncomfortable. He ignored this and continued injuring me while I begged him to stop.

“I felt violated, dirty and in a lot of pain. This was rape. I believe that he actually forgot that night and as I tried to tell him what happened he interrupted and said he didn’t want a relationship with me anymore.”

After their break up Emma was left heartbroken. She wrote in her report to the university: “Heartbroken over the Christmas holidays, I started becoming seriously suicidal and this severely affected my January exams. He acted as if nothing had happened and kept initiating intimacy, knowing I would reluctantly give in due to my feelings for him. I never slept the nights he stayed with me, having panic attacks after repeated non-consensual violent sexual contact and demeaning verbal abuse.”

During the time Emma remained as a Sussex student, she engaged in counselling with the Student Life Centre for her abusive relationship. She also failed her second year exams, but was not allowed to fully resit them. She told The Sussex Tab: “I spoke with both the Student Life Centre and the university counselling service about the abusive relationship I was in whilst I was still a student there. I was still in the process of realising what I was experiencing was in fact abuse because it was so covert. It was in the counselling service when I came to this realisation. Yet despite having extensive evidence and reason for mitigating circumstances during my escape from this relationship, I was still not allowed to have a full sit of my second year exams.”

Emma dropped out due to the stress of seeing her attacker on campus and her waning academic performance. Because Emma was not a student when she eventually reported the rape, no immediate action was taken and she was told she may not even be informed about the outcome of her case. “The only support provided was links and information about rape crisis help lines. No safety measures were taken. And again, because I was not a student at the time, the support of counselling was taken away when I felt I had no other option other than to drop out”, she said.

Emma left university because she felt it was the only choice given the ultimatum she faced. Either start her second year again at the university where her abuser lived, worked and studied, or drop out.

After reporting her case to the university on 10th November 2019, Emma was sent the “outcome” on 8th February 2021, a year and three months later. By this point, both her and her abuser had left the university. She was informed: “The Student Discipline investigation into your report has now concluded. The conclusion of this process results in the sexual, physical and abusive (psychological) misconduct being upheld.” Just like that, 15 months after reporting – it was finalised. Everything was upheld, but it was too late to help anyone. 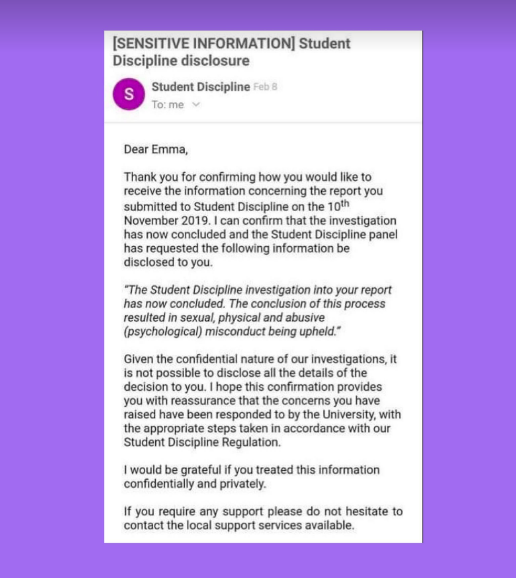 A spokesperson from Sussex University told The Sussex Tab: “The University of Sussex does not tolerate the use of violence, of any kind. We are absolutely committed to ensuring our environment remains safe and inclusive for all members of our community. This position is further reflected in our Statement on Violence. While it would not be appropriate for the University to discuss individual cases, we always take seriously any report made by a student. We investigate every case reported to us and take care to support students through the process. This applies to both those communicating concerns and for those responding to an expressed concern.

“Cases are investigated without prejudice by trained members of staff, who conclude, through careful consideration of the evidence, whether an allegation is upheld, partially upheld or not upheld. We aim to communicate clearly with all parties throughout, while complying with our legal obligations, including those under data protection legislation. Any member of our community with a concern is strongly encouraged to contact our dedicated services. You can email: [email protected], or call 01273 876767 (Mon – Fri) to speak to an advisor, or if you’re in an emergency call 24/7 on 01273 873333.

“Due to the serious nature of many of these cases, our internal investigations can be delayed, sometimes significantly, by ongoing police investigations or serious medical factors. We fully acknowledge that this can be distressing for those involved but it is important that we do not interfere with or jeopardise any criminal process. Furthermore, we have a responsibility to ensure that the medical needs of all participants are given due consideration.

“Our students’ wellbeing is and will always be important to us and we have an open door to providing support. We will continue to take action where we can, even if that means the process takes time. It’s very concerning to the University to hear from any student who feels their case has not been handled appropriately and we will always listen to students with feedback on how our processes are experienced by them.

“The University has a dedicated framework for student misconduct concerns to be investigated (Regulation 2: Student Discipline). Decisions are made on evidence and to the required standard of proof.

“Student discipline consists of a dedicated student discipline team to support/advise all parties engaging with the process and a pool of 28 trained Investigating Officers across the university to independently investigate a communicated concern. Also representatives of University-Management, staff and the Students’ Union are collectively convened as a panel to determine the outcome of the most substantial allegations, in the rare eventuality this is required.

“During the 2019/20 academic year, the University responded to 18 reports that alleged misconduct associated with physical, sexual and/or abusive behaviour. The University is unable to comment on an individual case. However, two-thirds of these reports (12) resulted in the allegations communicated being upheld, based on the evidence available and following a detailed investigation.

“While investigations proceed, the University has the power to input in place precautionary action. Such actions may include requirements not to contact the reporting student, prohibiting a student from campus or temporary exclusion. The Student Discipline Office will inform reporting students, subject to GDPR requirements, of the steps taken to protect them during the investigation of their allegation.”