Yesterday, Brighton & Hove City Council issued a statement in support of the protests happening across the world after yet another black American died at the hands of the American justice system.

They recognise that the UK cannot ignore this, and call on the UK government to eliminate the racial disparities within our own justice system.

To show their support against all forms of inequality, Brighton Palace Pier, the Brighton Centre and the BA i360 will all be lit in purple on Friday 5th June from 8pm. They have also asked Brighton residents to kneel or stand, holding a minute’s silence on their doorsteps at 8pm on the same day in solidarity with people of colour.

The council’s statement reads: “As a council we recognise that George Floyd’s death took place in the context of centuries of social deprivation and economic extraction that have been endured by people of colour.”

“As anti-racists, we stand shoulder to shoulder with all those in America and across the world who feel anger, hurt and fear after yet another instance of discriminatory state violence.” 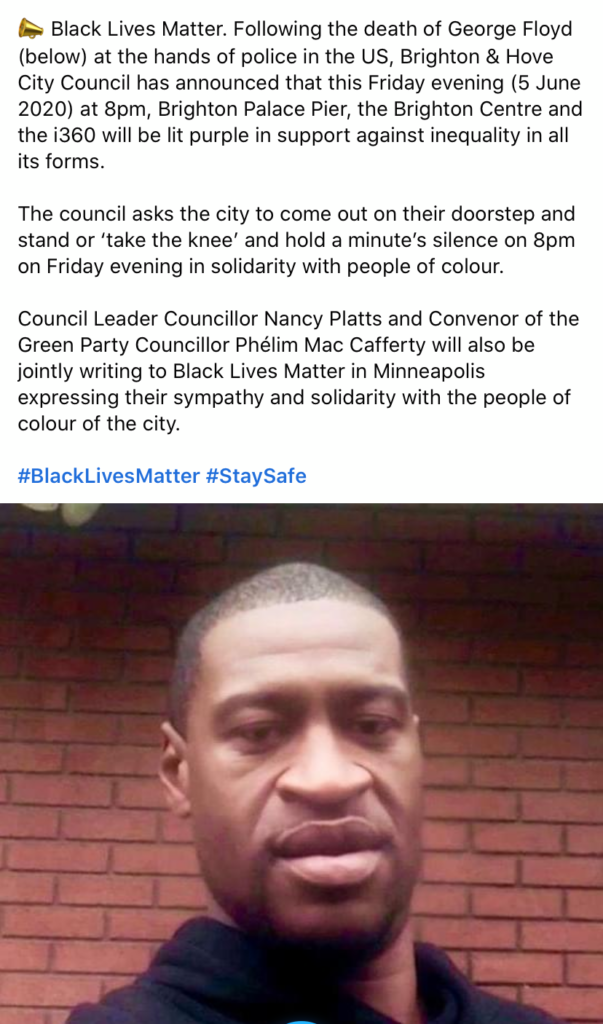 They recognise the good and important work the police forces do to protect communities but acknowledge: “it is also crucial that we in the UK recognise that we are still not immune from institutional racism in our justice system.”

“According to INQUEST, BAME communities were twice as likely to die in custody. The Runnymede Trust found that, between 1995 and 2015, no police officer was prosecuted over a person of colour’s death in custody.”

“We all have a responsibility to tackle racism. Brighton & Hove take pride in being a City of Sanctuary and a community committed to celebrating our diversity and opposing prejudice and racism.”

Nancy Platts, Council Leader, and Phélim Mac Cafferty, Convenor of the Green Party, will be writing to Black Lives Matter in Minneapolis together, expressing their sympathy and solidarity with both the cause and people of colour.

“Now is the time to end the severe class and racial inequalities which exist across the world.”