Sun, seagulls and sand? You can have it all from your sofa.

With another three weeks of lockdown looming, it’s safe to say things are getting a little itchy. I’ve become a yogi master, I’ve given myself a terrible haircut, and I have more or less completed Disney +. The infamous boredom monster is beginning to rear its ugly head.

Grappling with the endless monotony of each day, I realised I had begun to lose sight of why I moved to Brighton in the first place. Usually, I would take a gentle stroll through the Lanes, or maybe have some bevs on the beach in order to soothe my soul. But in these trying times, I had to look for the next best thing. A virtual tour, of course.

After a bit of preliminary research, and a lot of time on Google maps, I curated the perfect tour: an expert balance of arts and culture, food and fashion, and available for you to peruse at your leisure whilst you sit on the sofa in your pants. Here’s what I got up to.

Having only set foot on campus a handful of times this year (deep breaths as you feel that £££ slipping away), I decided to pay it a little visit. Maybe it would even inspire me to do some coursework!

The university offers a virtual tour of campus, presumably aimed at prospective students, but well-suited to a gal missing her education.

First stop: the library. Beautiful from the outside (it’s supposed to look like books), but alas, I forgot my student card and could not enter. Moving on.

The thought of studying had made me pretty hungry, so next I headed to Eat Central to score some tasty nosh.

As far as dining halls go, Eat Central is pretty up to scratch: the food is good and it doesn’t give off too many school-dinner vibes. But it looked a bit busy, and everyone had a kind of ‘you can’t sit with us’ aura. I decided that lunch could wait.

It’s a well-known fact that you’re not a Sussex student unless you’ve sat atop Stanmer Park, bev in hand, Snapchatting endless pictures of the sunset. As the current climate seriously limits my ability to do this, I resorted to Google Maps for that classic countryside feel. 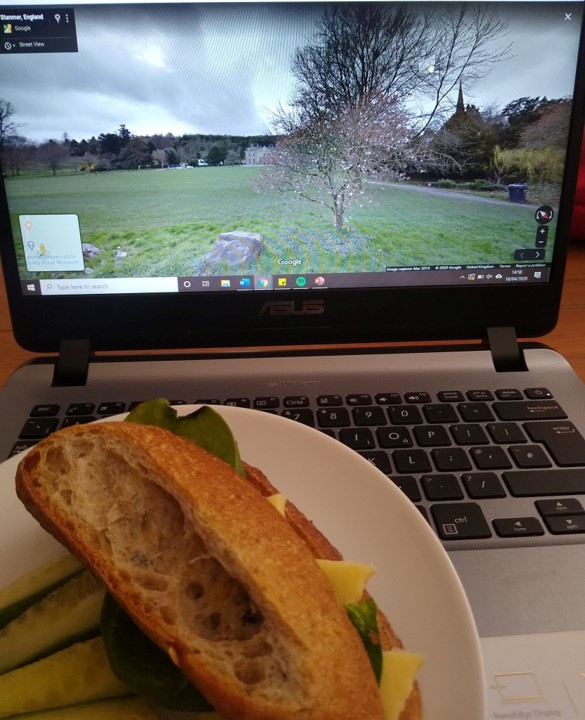 Unfortunately for me, the map for Stanmer Park was taken on a particularly cloudy day, but the silver lining to this is you can’t worry about the possibility of rain when you are literally not allowed to leave the house. 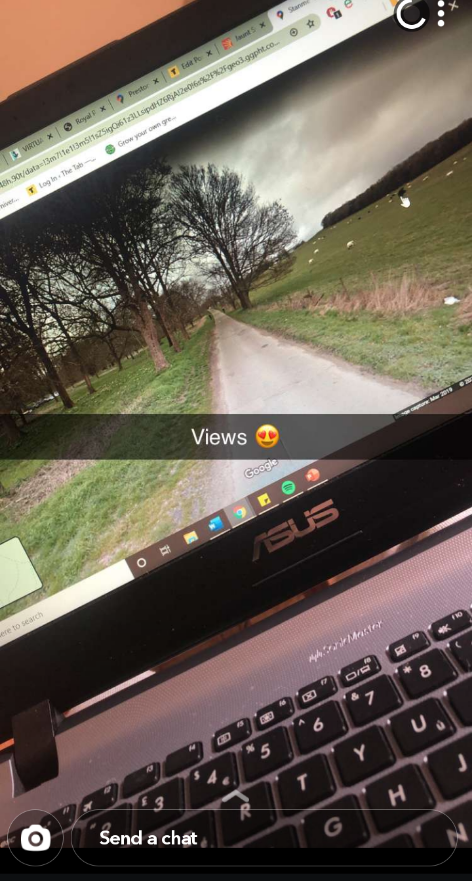 With the Falmer area pretty much covered, I decided to absorb some culture after lunch. Just off London Road, Preston Manor is an Edwardian-style mansion, surrounded by the tranquil gardens of Preston Park. Having already spent my daily outside-time on purchasing (essential) choccy from co-op, I had no choice but to explore this beauty from the comfort of the sofa, via an online virtual tour. 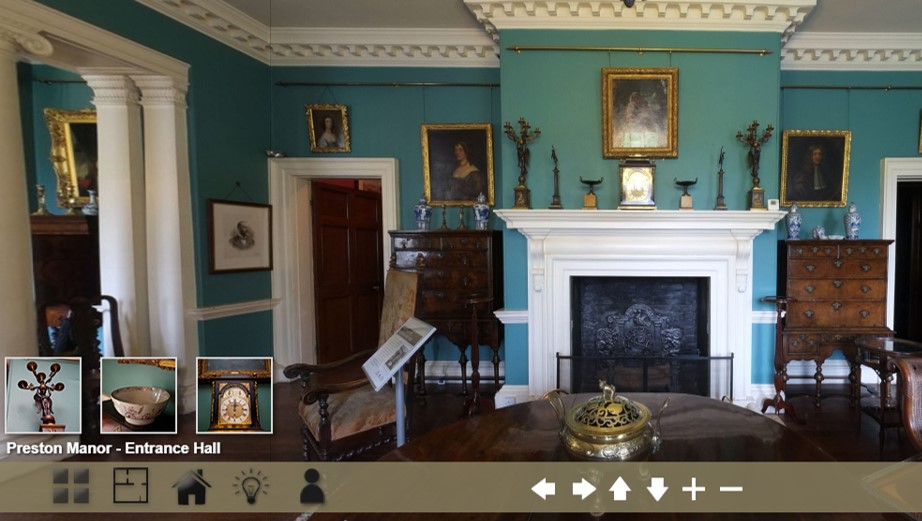 Not only did the beautiful interiors of the manor make me want to re-decorate my entire house (just look at those teal walls), there was also a murder mystery game incorporated into the 360° tour. As the name suggests, ‘Murder in the Manor’ requires you to find out who killed its owner, Elizabeth Franklin-Yew, by searching for hidden clues. I was absolutely hooked. 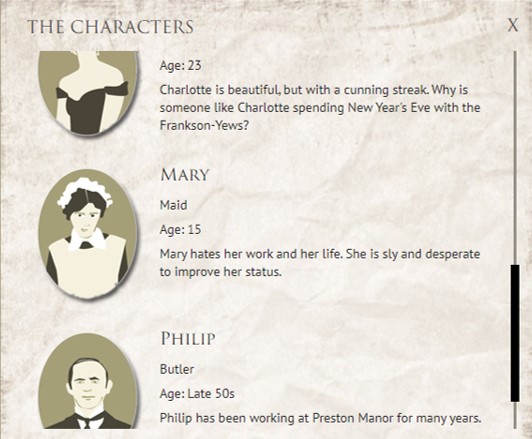 My money’s on Mary, tbh.

Feeling it was time to jump back into the 21st century, I took a moment to appreciate the vast array of graffiti art Brighton has to offer.

A quick scroll through Instagram was sufficient to find shed loads of colourful walls, murals and designs, or alternatively, VisitBrighton has a collection for you to view at your leisure.

Thanks to whoever restored this old flower haha. Unless it's just a coincidence and someone's tag is 'JR you' 😂 #mypyenleaks #brightonstreetart #happyflower #Thisisforyou

Next, I was in the mood for some historical appreciation, so I made my way to The Royal Pavilion Museum (you know, the Taj Mahal), which offers online tours of its luxurious interior, including areas which are not open to the general public. By God, did I feel fancy. 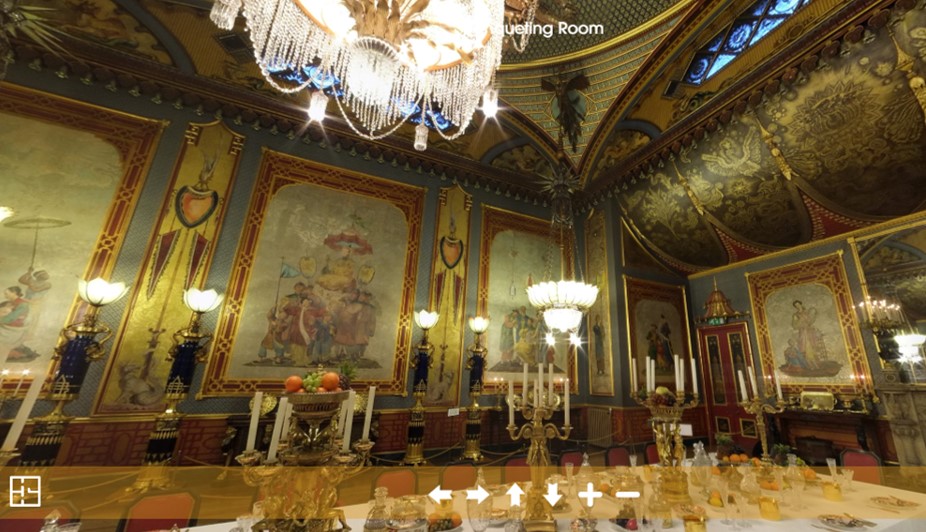 To mix things up, I opted for the WW1 tour, which tells you all about how this magnificent building was used in the First World War. There is audio description in a variety of languages, but honestly, you will spend the whole time admiring the ceilings. 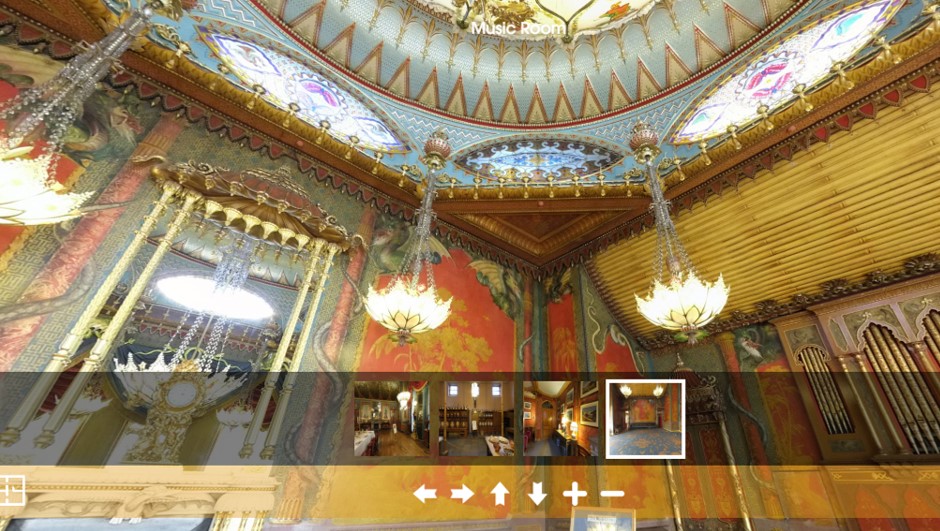 As I headed further into Brighton, it seemed only fair to pay Churchill Square a visit. An avid window shopper, I decided to emulate the shopping centre experience with some online browsing. 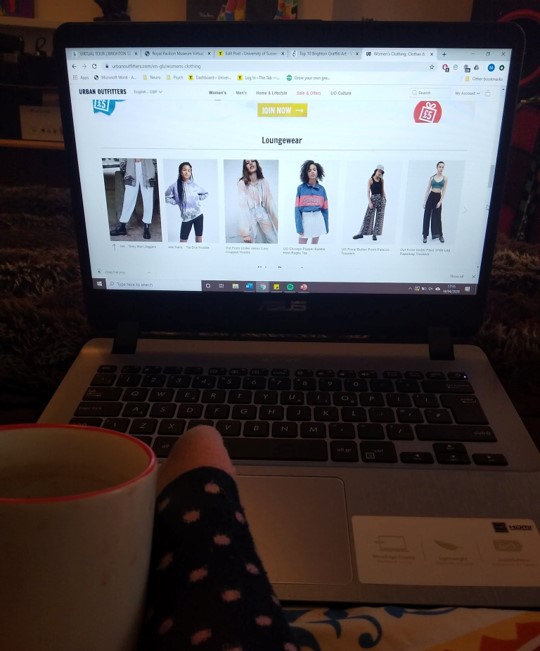 I didn’t buy anything though, ’cause that’s all kinds of bad.

By this point, I was getting rather peckish, and with no option under lockdown to go and sample some of Brighton’s finest street food, I had Brighton bring the food to me. A quick tap on Deliveroo and half an hour later, I had some tasty goods delivered to my door. 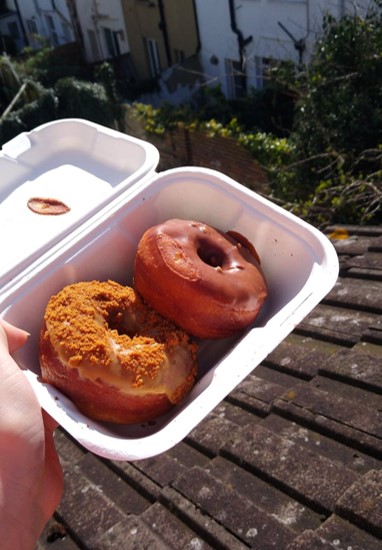 The epitome of Brighton, the last stop on the map had to be the seafront. Besides getting a housemate to push me down the stairs, I couldn’t think of a suitable way to simulate the rides on the pier, so I looked for some other, more lockdown-friendly activities. 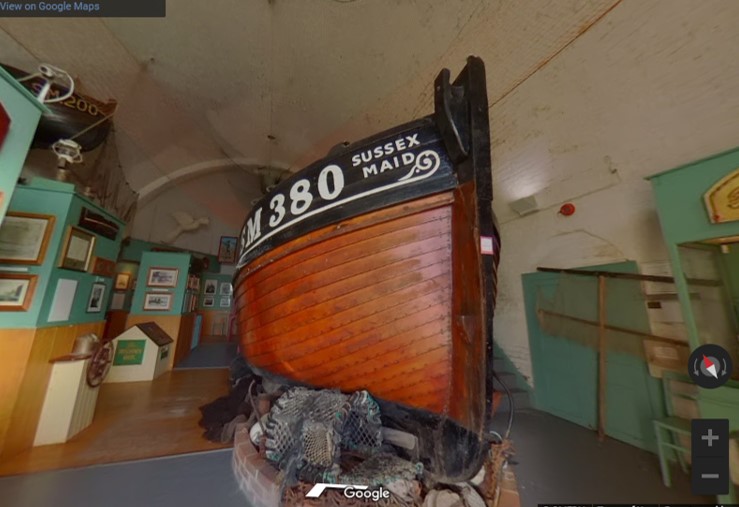 Seafront Heritage Trust offers a virtual tour of Brighton Fishing Museum, which is essentially a big boat in a room and lots of pictures of smaller boats. Extreme Grace Darling vibes, and as the third museum of the day, I felt sufficiently educated enough to be granted a relaxing stroll on the beach. 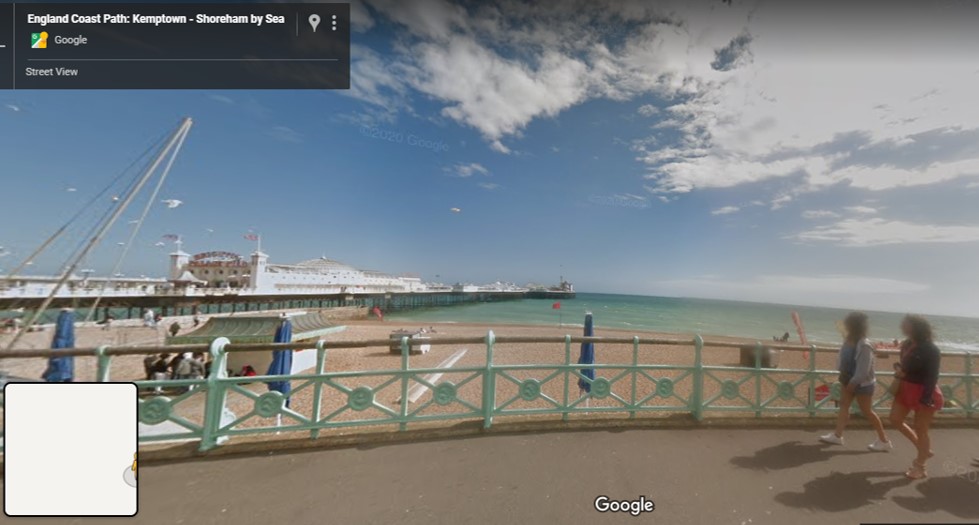 As close to the pebbles as street view would allow, I took a moment to gaze thoughtfully at the cerulean sea, and reflected on my journey through Brighton. I could almost hear the crashing waves and the chatter of tourists – but something didn’t seem right. I knew what I was missing. In a bid to emulate the Seagulls’ reign of terror over the city, I had a housemate steal my ice cream. 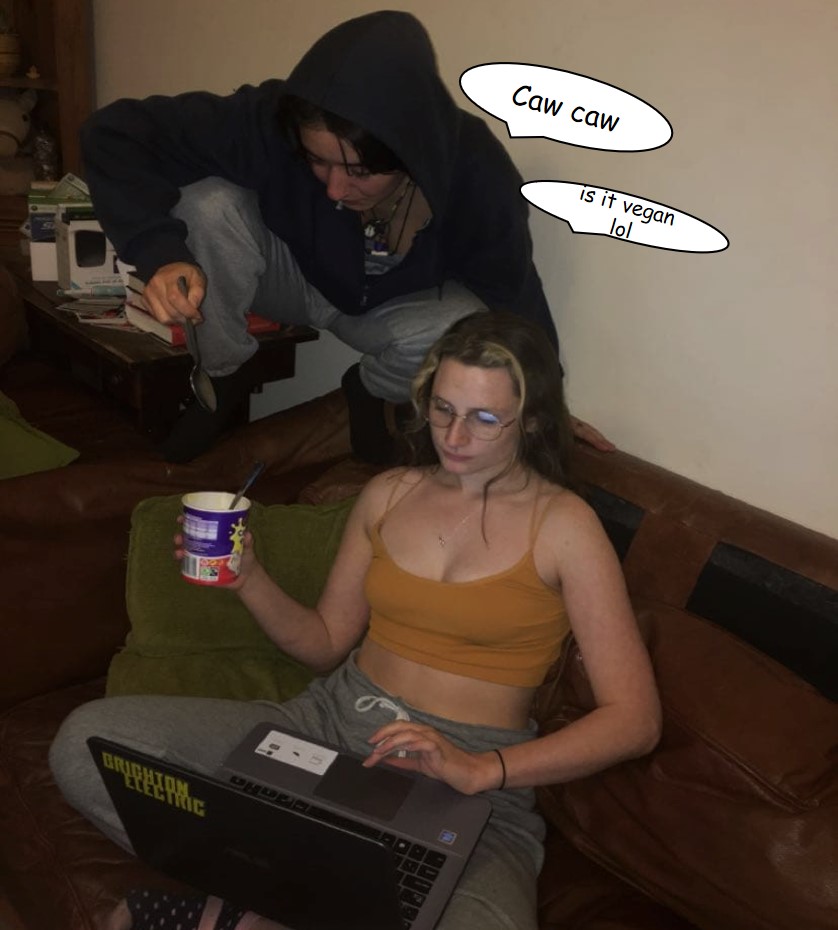