We asked Sussex students what they think of the upcoming strikes

Most of you are just happy you get an early Christmas

It was announced this week that Sussex University lecturers shall be striking for eight days later this month. This comes after University and College Union (UCU) members voted to take strike action against an array of issues such as pay and workloads.

Naturally, we wanted to hear from you, the students of Sussex who shall be losing out on valuable contact hours and boy, did you deliver. 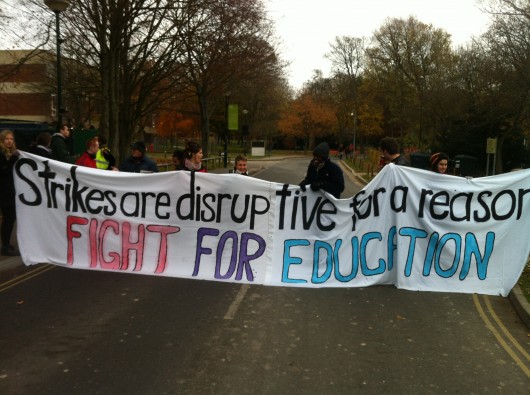 Final year American Studies and History student Arwen told us how they fully supprt the strikes, saying, "Those working hardest get hit the worst. My mum is the President of the UCU at Kent uni and she says that we must support the staff on the picket line. The Univeristy need to listen to the voices of our lecturers and hear their demands."

First year Psychology student Hadley also feels this way, telling us how the workers have every right to strike:

However some of you felt a little more conflicted. Second year Anthropology and Cultural Studies student Layla explained to us how she feels:

One Sussex graduate who had her final year affected heavily by the strikes two years ago felt similarly, saying "I completely understand but it has a huge impact on students."

Some of you are just outright angry at the whole situation, including second year Economics student who pointed out the high tuition fees we all pay:

However there are a few of you who couldn't care less and are actually pretty hyped about it all, with second year Marketing and Management student being very excited about having eight days off:

A second year Business student also joined in on the celebrations saying how they are "getting a late (but wanted) reading week and a super early Christmas!"

Do you have any opinions on the upcoming strikes? DM us on Instagram @the_sussex_tab .