Use of the word left students ‘noticeably unsettled’

The Sussex Tab can reveal that white English lecturers at the University of Sussex has been using the n-word within their English seminars, with one lecturer defending his use of the word.

Students have taken to group chats with their course members to express their concerns about the use of the word, with one commenting on how the discussion around it feels "inappropriate." Another student has said that it made people in her seminar "noticeably unsettled."

One first year English student wrote on the English course group chat: "Hey everyone, I'm going to be writing a letter to the English department about the very irresponsible use of the n-word by teachers/students, and the inappropriate discussions that take place around it. I know that a few tutors say it currently but if anyone has any other information/experiences please DM me because it would be very useful". 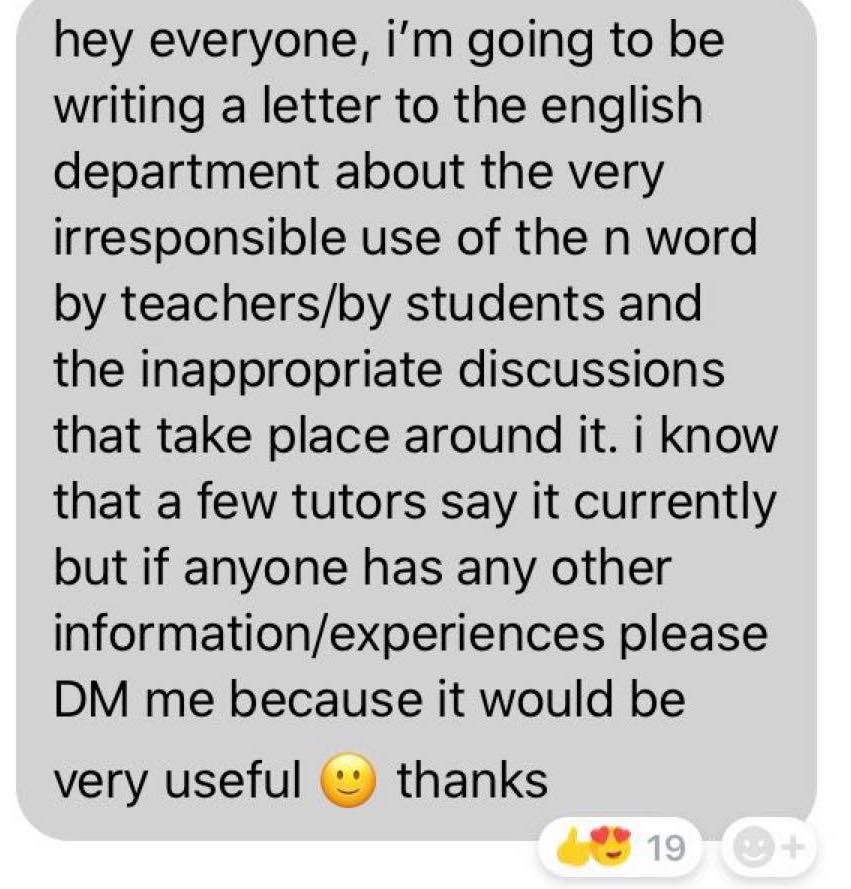 The same student told The Sussex Tab: "You'd think for a 'progressive' place like Sussex, people wouldn't be so stupid to have such an irresponsible discussion in a room which full of all white people, two Asians and one black person."

Another student claimed that one of her English professors "uses the word casually." She said: "Like one time she said the word hottentot is equivalent to 'n*****'. She never even brought up that it could make people uncomfortable even tho she could see us all looking v noticeably unsettled."

When we approached one of the professors in question for comment, his response used the n-word, with the hard 'r', three times. The slur has been starred out in this article, though it was written in full in his response. He said: "It is impossible to teach this text accurately or to cite its title correctly without using the word 'n*****', if students are to be aware of how the rhetoric and cultures of racism have evolved, it is necessary to discuss how the languages and semiotics of racism operate.

"The use of the word n***** in the context of an academic seminar in no way endorses any racist attitude on the part of any participants, including myself."

The professor also defended his "global reputation as a scholar who has worked unstintingly to uncover and to attack the racist foundations and assumptions upon which the cultural edifice of pro-slavery thought and art were based." The other lecturer in question did not respond to our requests to her for comment.

A University of Sussex spokesperson said: “The staff teaching these lectures are extremely sensitive to the destructive power of certain words and, have spent considerable time across their academic careers empowering students to intellectually combat and resist racism in contemporary culture.

“The University hasn’t received any complaints from students on the modules – however, the lecturers would be very willing to discuss any concerns, or students can speak to their student experience team.”