‘We’re a pro-conservative group and not ashamedly so’: We spoke to Joel Chilaka, Sussex Uni’s Turning Point Influencer

We talked professor watch-lists, political correctness and whether the left can meme

Turning Point UK is a non-profit organisation for right-leaning students, and an offshoot from Turning Point USA, famously known for their creation of a left-wing professor "watch list".

Turning Point USA's Charlie Kirk and Candace Owens are coming to Brighton on 13th March, for an event hosted by Sussex's Conservative Society. We sat down with Sussex's Turning Point Influencer, Joel Chilaka, to quiz him on Turning Point UK and the upcoming event. 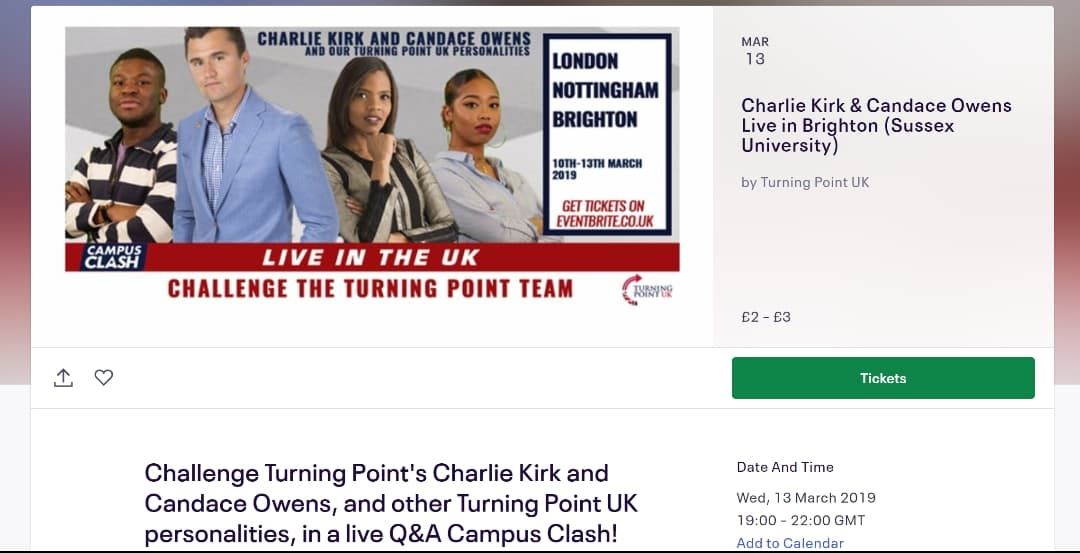 What is the event being held, and what will happen on the day?

When asked about the event, Joel explains: "It will be for people to chat and get their views challenged. It is also for people who completely disagree, they can come and challenge us."

Joel thinks that most topics should be up for debate: "Turning Point is pro-free-speech and encourages people that there shouldn't be many things that you can't talk about.

"The two aims are to spread free speech and debate across society, especially in areas like Sussex campus where, we think is under threat. We want to spread that message across young people."

Is it difficult being a TPUK influencer in a predominately left-wing environment?

We asked Joel what it is like being a TPUK influencer on a campus as left-wing as Sussex. He tells us the story of when Mike Weatherley came to campus, who was the local MP for Hove. "It resulted in the police having to be called to campus", he explains.

"Most events are only advertised to members", he admits, referring to his time in Sussex Tories. Joel explains that whilst he has a thick skin, it is in his duty of care to ensure that the views of new members are not harassed.

Do facts care about your feelings?

Joel added: "Offence is a key part of life, so to try and rule and limit the language and words you can use based on offence is a non-starter.

"Even if you don't intend to offend somebody, if you were just based on feelings, somebody would get offended somewhen.

"What you have to do is be respectful to people as possible, but it doesn't mean you have to show your view off."

Can the left meme?

The question we really wanted to get to the bottom of was how good is their meme game?

"The left can't meme; I'm not saying the right can always meme either. Currently we both can't meme and that is somewhere everyone needs to improve on."

There’s always a wacky theory when socialism fails, never an acceptance that it’s doomed to…look at the left and Venezuela at the moment. pic.twitter.com/rHGf32mGW4

Will there be a professor watch list in the UK and is there anyone at Sussex you already have your eye on?

Joel states that there will not be any kind of professor watch-list in the UK: "If people have any lecturers that are shutting down a point-of-view, and not justifiably so, they should use the university systems to report that, which can be quite difficult and people don't know they exist.

"We might want to challenge the university to be more open and more tolerant of a different point of view. But no specific lecturers."

If you're a student in NOTTINGHAM make sure to come to our live Q&A with Charlie Kirk, Candace Owens and TPUK personalities! Link below? ? https://t.co/jygOv4mUHI pic.twitter.com/sejxBfqvF7

At a TPUK event in December, Candace Owens said: "If Hitler just wanted to make Germany great and have things run well, OK, fine." What do you think of the criticisms of this comment?

Joel encourages people to not believe everything they read and to take context into consideration, "because she then went to explain her point about globalism."

Joel says: "I think it has got to the point where you can't really trust what the media reports as facts, you have to go and listen, and find the clips yourself. I would encourage people to go and listen to the whole thing and make their judgments from there on what she has to say."

In light of the current national conversation surrounding gender and the issue of trans rights, have you spoken to the non-binary community and what does that community mean to you?

When confronted with an important community to Sussex's culture, Joel says that TPUK "are kinda just open for everybody to come and have a discussion."

He encourages people to step out of their comfort zone: "Give people a chance and then judge on the basis of that. Instead of saying 'well you're right-wing therefore you must not be for me because I am non-binary, or because I am gay, or because I am black.'

"Actually, people should be saying I am going to listen to you, and if you come out and say this isn't for me then great, but at least you have given it the opportunity."

We asked Sussex students what they’re giving up for Lent