Instagram is incredibly popular, over 600 million people tap the app every month. But annoyingly, a lot of them are tapping it wrong.

Due to its success, Instagram is no longer just an app that you secretly use during your shift – for some people, Instagramming has become the shift. It’s now a legitimate profession. The amount of followers on your account can significantly improve your mood when visiting the ATM. And that has changed things.

Good lighting up in here. Look how happy I am about it. ?

Most of us continue to use Instagram in the right way: as a platform for appreciating and uploading photos. But there are some lurking entrepreneurs – like pick-pockets at rush hour, they move through the crowd with a dodgy motive. They don’t care about filters and angles; they care about stats. And they have their methods.

Last week, some random commented on my photo, calling it a “Masterpiece!!!” He then wrote the same comment on another photo. Then another. Then another. By the sixth notification, I was beginning to doubt his sincerity.

These people and their fake adulation are everywhere, and it’s clear what they’re after. They want our attention; they want us to feel flattered and gratified. They want us to click on their profiles and reciprocate the gesture by following them or liking their stuff. I never do this. And I presume no-one else does it either. So why do they persist? Are these people blindly spamming on the hope of extra followers, or is there a real-life conversion rate that encourages these copy-paste parades?

To find out, I decided I would become one of them. I decided I would visit 500 random Instagram accounts, that I’d like 500 random photos, and leave 500 vaguely encouraging comments.  I wanted to determine, finally, if bombarding people with fake positivity will actually boost your Instagram stats. I wanted to see if being fake-nice can make you a social superstar, or just another sycophantic saddo.

Firstly, I had to create my fake comment. It had to be encouraging but not too over the top. It had to be noticed and appreciated, without standing out as blatant spam. And it had to be vague enough to work on any photo that I‘d end up slapping it on. So I decided that the next 500 photos I came across would be “cool”. A few fashionable emojis on the side, and I was good to go:

Then I had to find my targets. I wanted to harass real, regular humans who would notice my comment on their page. I’m fairly certain Kim K wouldn’t wake Kanye with shrieks of excitement because @AndrewTookAPhoto complimented her curves. So I went on my followers list instead. Trying to avoid spamming people I actually knew, I targeted a friend of a friend of a friend.

Then I went into the list of people who had liked that photo, and selected someone at random, intending to spam them as well. This system actually takes a fair bit of time because a lot of people have privated their accounts. I always used to wonder why people chose to do that, and then I realised; it’s because of people like me. I felt a sticky feeling of shame as I continued to double tap my screen and paste my spammy mantra into public comment sections. But you know what, it got very easy. At first I would flinch from the cringe of it, but after dropping about ten, I grabbed a drink, put on some music, and ploughed through another 90 pages. The first 100 comments took me just under an hour.

Then I had an epiphany. I realised that if I searched the discover feed with a specific hashtag, like the word “art” or “city” or even “cool” I would only find public accounts; Instagram allows you to stream through these pages extremely quickly. I abandoned the method of going in and out of accounts and embraced the scroll and paste. It took me eight minutes to graffiti the next 50 pages.

I had liked 430 photos. I had left 430 comments, and I was ready for number 431. There were some trees in the photo. I decided these trees were “cool”. I pasted the message. I pressed send. And then this happened: 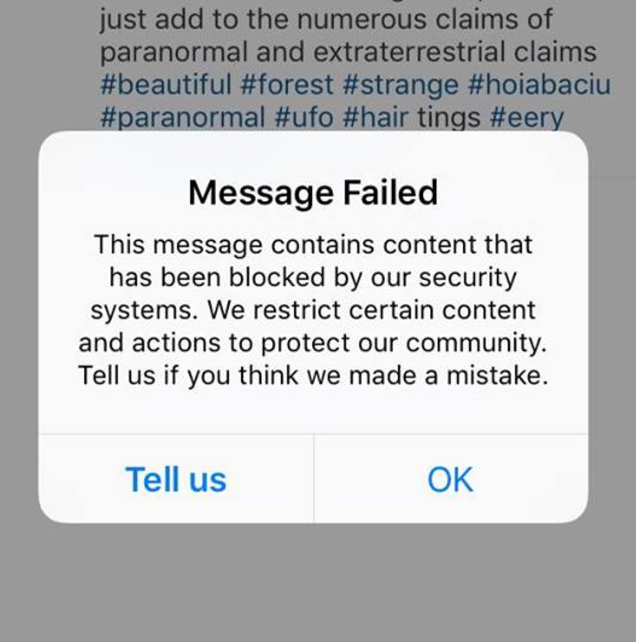 They had not made a mistake – aside from trusting me with an account. They were onto me, and I was now on a list of Insta-shitheads. Although, this was at least slightly reassuring. It was comforting knowing there was some kind of barrier stopping these comments from plaguing the platform. Unfortunately I had managed to post it 430 times before they noticed I was getting a little repetitive.

I went to bed, wondering if I’d have an Instagram account to open in the morning, and if so, what I would find in my notifications. What had my spamming done?

This is what my spamming had done:

It wasn’t a substantial amount of activity, but it wasn’t bad considering I hadn’t uploaded anything; I’d just harassed half the internet. And they had taken it extremely well.

For the next few days I continued to receive notifications that were a direct result of my spamming. In total, 59 people replied to my original comment, all of them upbeat and grateful,  all of them convinced by the authenticity of my compliment. On top of that I also received 58 likes on my Instagram photos. My followers jumped up by 11, and two people gifted me with some spam of their own.

I’ve checked, and Instagram will let me comment on people’s photos again. They even let me post the same spammy message I was temporarily blocked from using. So the opportunity is there to dive straight back in; I did achieve some results after all. I gained a bunch of followers, and some of them stuck around, even though I made the decision not to follow any of them back.

Subtle spamming, it turns out, is fairly effective. Leave a positive comment on someone’s page and it’ll get a decent response, even if that comment is completely meaningless. It doesn’t take that much effort, and it did score me some followers. The ratio isn’t a bad one. The method has some substance.

The point of social media is to share yourself, and to let others decide if you’re worth following. Your stats should reflect the strength of your content, not how much false praise you’ve breathed into someone’s ear. Don’t adopt those spammy shenanigans because, ultimately, it’s redundant.

It’s also annoying, sinister, and self-obsessed, but most of all:

I hope he knows they deserve the world