It’s not all about Varsity Challenges

Let’s be honest: whether you’re a Monash student, or from Melbourne University, you are blessed to be living in what has been voted ‘The World’s Most Liveable City’ for a sixth consecutive year. But, not for the sake of trying, we might as well see who’s best.

So, the University of Melbourne students will argue that the city centre is the place to be and that no one wants to commute to, or even worse, live in Clayton, Caulfield or Peninsula. I must admit, if someone asked me to place Peninsula on a map, I wouldn’t be able to. But really, we all know that Clayton is Melbourne’s most up and coming suburb, and is nowhere near Footscray. I mean isn’t that a positive. Being based out in the sticks makes us Monash students appreciate the city centre and all its wonders. Of course, it’s a trek to get to anywhere of note and the Ubers home are expensive, but isn’t that is all part of the experience?

It’s always about location, location, location. Melbourne University is a short walk from the Central Business District, Carlton, Fitzroy and Brunswick. It hosts a stop of trams heading off to every corner of the city, be it the beach, or even the bubble of Caulfield. Everything you will ever need in life is available on the easily accessible Swanston Street, and we all know that there’s no better Italian food, coffee or ice cream than on Lygon Street. Carlton is funky as a place can be – it’s green, student friendly, and hosts great night life five minutes from campus. The only university with the better location is RMIT, but then who would want to study in a building which backs onto an ancient tri-level jail? 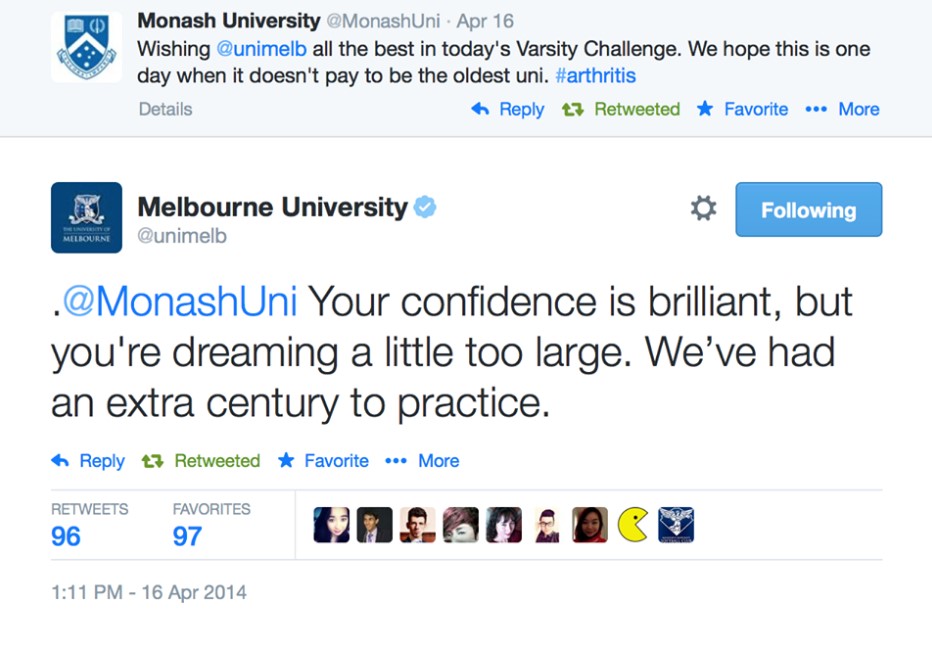 Monash has the people, Melbourne has the campus

Monash, being the less expensive, less elitist of the top universities in Melbourne, evidently attracts the more desirable, down to earth people. Ross, a Geography student said, “they’re like Gryffindor, we’re like Hufflepuff. We’re the plucky underdogs”. As if this the Harry Potter analogy wasn’t enough, Saphia added that “we’re a far nicer bunch.”

Don’t let anyone tell you that there is a more beautiful campus in the whole of this great country. Nothing beats taking a minute on the South Lawn to admire the stunning surroundings, the Old Arts Building clock tower, the moat, and the beautiful Design Building in the distance.  The Communist-style concrete mess that is the Physics block does let us down a bit, but we make up for it with the architecturally amazing colleges.

Don’t like the Main library? That’s fine – we have ten more, on the Parkville campus alone. Or just pop on your bike to the impressive State Library down the road. You’re simply spoilt for choice. 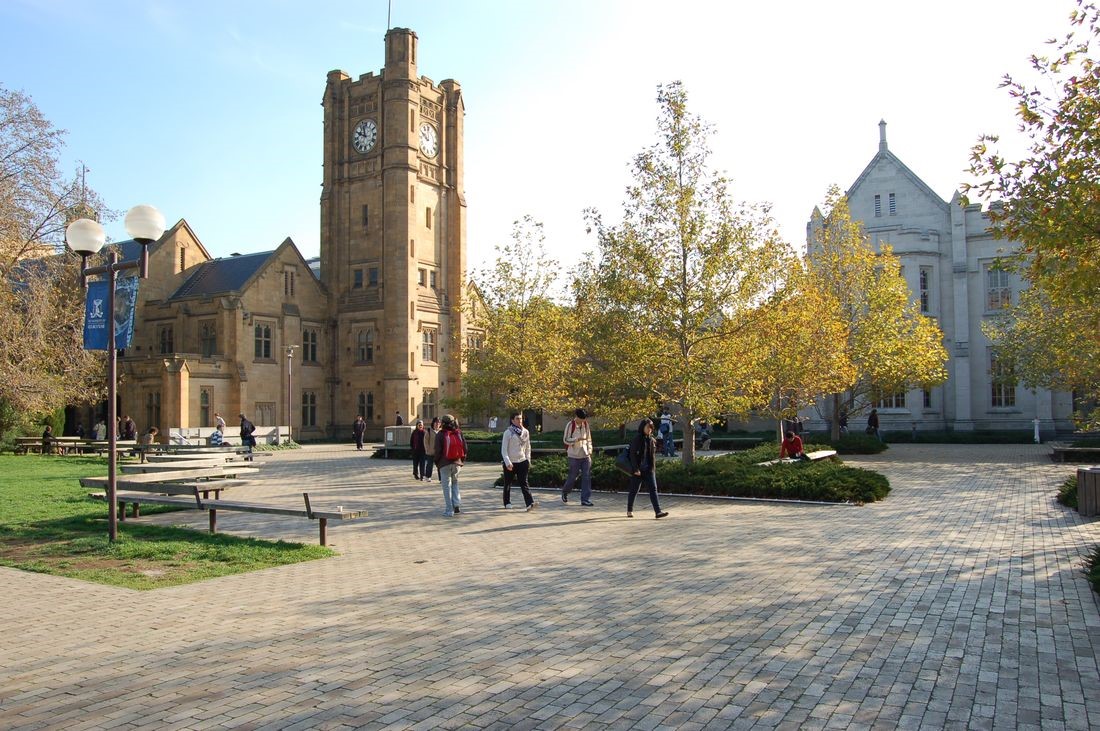 South Lawn is a sight to behold

A Big Screen for news or a worldwide reputation

Monash is a university that wants to keep its students informed.  At Clayton, outside the campus centre, stands the Big screen, blaring Greek News on SBS to all passer-by’s and students alike. What isn’t there to love?

Best in Melbourne. Best in the country. 33rd in the world. My mother purred with pride and delight when she heard I would be studying on exchange at the University of Melbourne, the historic institution which hep produce Julia Gillard, Cate Blanchett, and the notorious Walter Basset, who is widely recognised as the founder of lecture theatres worldwide. Even Trinity College is three times as old as the entirety on Monash’s million campuses. I could, in theory, walk into any British institution and demand a job now that I have Melbourne University written on my CV. It’s that easy.

The unlimited number of free sausage sizzles or delicious crepes

This is the clincher. Any day of the week, every day of the week, a Monash society, religious institution, or group is trying to ply students with sausages, bread, and a selection of either mustard or ketchup. The moment you walk on to campus you get that faint waft, which directs you around, or through Menzies towards a stall filled only with delight – sometimes free, other times not. So yes, Melbourne might have some other things over Monash, but our ability to feed our students this way remains the reason why we are the better university.

Tucked away behind the car park lies this university’s best feature. Its heavenly crepes. These godly creations are divine, and I’d know – they even gave me a loyalty card for single-handedly funding their stall for the last three months. Once you’ve decided on your toppings, witness as these geniuses prepare your Nutella, banana, strawberry, cinnamon, caramel-topped marvel. The lovely staff boast that they serve “the best crepes in town”, and I wouldn’t disagree for a second. 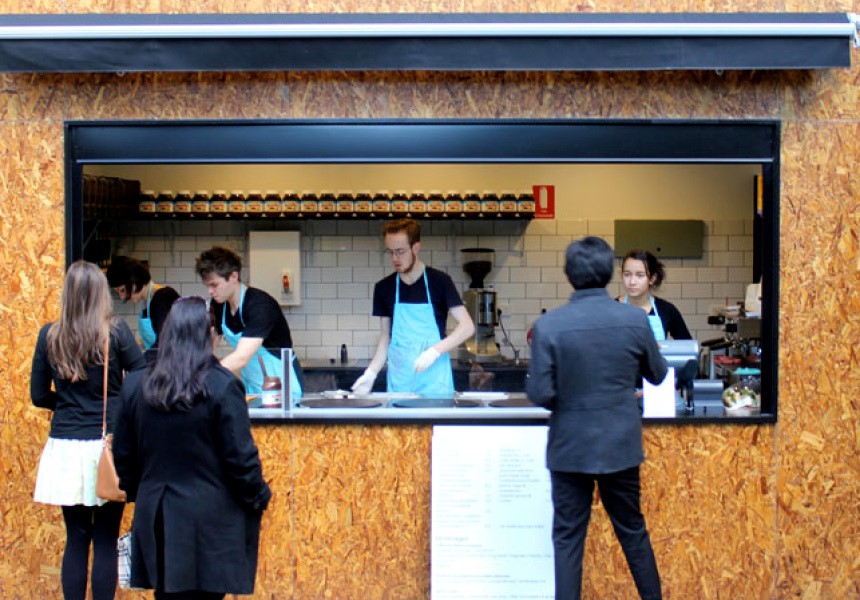 Breakfast, lunch and dinner; come and indulge yourself at Melbourne’s finest creperie

Would you rather The Nott or The CBD

Nothing compares to ‘The Nott’. As the only drinking establishment within a good few miles of Clayton campus, this pub is the place to be, get drunk and party. Of course, it’s not a nightclub or even a remotely cool bar; instead it’s one of those places that has a weird school disco vibe. This doesn’t take away from the fact that at the end of the day, it’s somewhere near enough to Clayton to get drunk and enjoy yourself, and of course, it’s far better than Dobbie’s!

Whether you want cheesy tunes, R&B, electro, pop: there’s something for everyone in the CBD! And the best thing is that there’s no need to get a taxi home. Either take a short walk at the end of the night (via Maccy’s of course), or jump on the trams which run until early mornings on weekends. If you’re feeling adventurous, there’s always ‘Revs’ – open Saturday evening, all the way until Monday morning. A whole 40 hours in a nightclub, and you’ll still be able to make it to your 9am.