In Conclusion, Ouroboros was a truly organic production with authentic acting and good dialogue. Ultimately, however, the play didn’t quite manage to function as a cohesive whole. 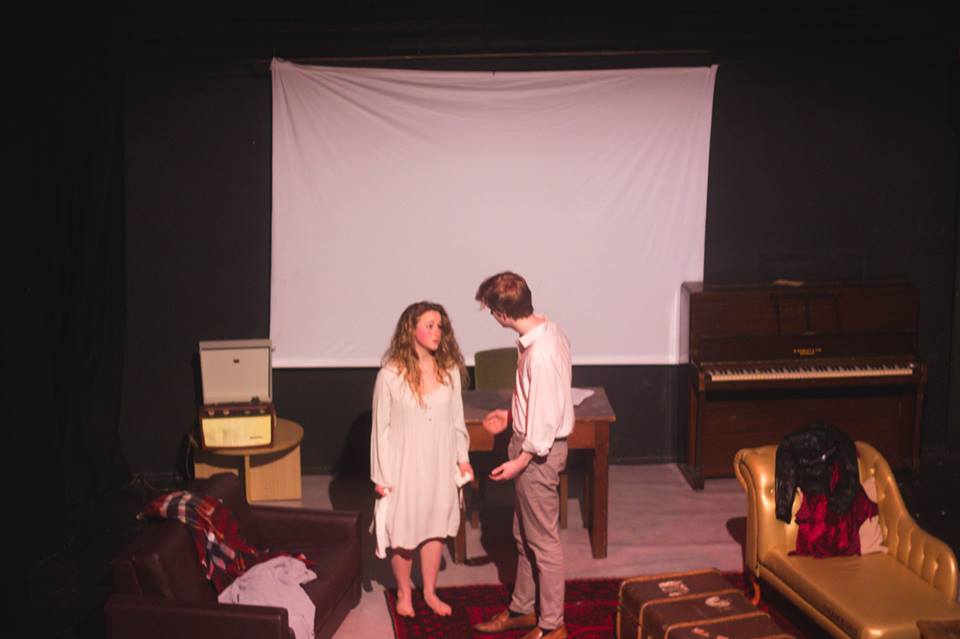 Entering the Barron Theatre this Friday night, I was confident that if Ouroboros was as good as its name is difficult to pronounce then I’d be in for a serious treat. This, coupled with the fact that local journalism had assured me that Brennan was set to ‘go out with a bang’ with her latest and final production, meant that my expectations were sky high prior to sitting down on my cushiony blue seat. So did Ouroboros live up to the hype? Only time will tell (the time it takes you to read to the end of this review of course).

Let’s start with the plot. The play comprised of three stories, each comprising of two characters played by the same actors each time, namely Madeleine Inskeep and Tommy Rowe. Story one placed us at the commencement of a blossoming romance between a depressed musician and a bar owner’s daughter; story two placed us at the heart of a relationship between the daughter of an anonymous Austrian dictator who doubts her father’s motives and her ‘French’ music teacher whilst in story three we were placed at the final stages of an adulterous relationship between two Brits in a time period non-descript but no doubt well into the past. Each story was divided into two, and each half was placed at opposite ends of the narrative such that the order was as follows: story one part one, story two part one, story three part one, story three part two, story two part two, story one part two. There were many positive elements of the production, and I would like to begin by commending these.

Firstly, the play had great naturalism. Tommy Rowe has already proved himself as an actor capable of performances brimming with naturalistic authenticity, and in this production he didn’t disappoint. Inskeep too gave an accomplished performance. She surmounted the emotional obstacles her role demanded from her successfully and her ability to balance this with such vibrant humour was impressive. The chemistry between these two was electric, formulating a duet so authentic that it made it difficult to believe they were reading from scripts; a heavy contributor to the truthfulness of the play as a whole. Without well-written dialogue to provide the platform for the actors to flourish the play would have no doubt still have fallen short. Thus, Brennan’s ability to write dialogue that truly resembled real life deserves recognition, it being further key factor in formulating this truthful essence.

Furthermore, the play was very organic. It is easy to conceive of people having watched the show and labelled it as ‘slow’. However, the gradual pacing of the plot created the impression that these relationships were progressing and developing in an identical fashion to those in real life; an organicity which made the production all the more engaging.

The third thing impressive about this play was its dynamic means of presentation. This play wasn’t confined to the theatrical form but also made use of audio and video to convey its narrative.  This enabled Brennan to more effectively navigate throughout different time periods creating a more immersive experience for the audience and giving us deeper knowledge of each story.

My qualm with Ouroboros was its lack of cohesion. Plays of this type need some kind of narrative or thematic linkage in order for it stand as a cohesive whole as opposed to a bunch of vignettes that happen to have been placed next to one another. Narrative connections did feature – a ‘jumping in the river’ motif featured in at least two different stories, and the American female from story one appeared to have discovered an audio transcript from the female in story two -however these were scarce, and of insufficient quantity and depth to bind the play as one whole. Thematic connections were vague, and although one could probably come up with something if you squinted hard whilst staring, I was very unsure as to whether there was much more linking these three stories thematically than would be three unconnected sketches that happened to centre around a relationship between a boy and a girl. One could possibly argue that ‘relationships’ was the thematic link between the individual narratives. However I would counteract this with the assertion that a theme so general isn’t quite sticky enough be the glue that makes three stories one play.

In conclusion, Ouroboros was a truly organic production with authentic acting and good dialogue. Ultimately, however, the play didn’t quite manage to function as a cohesive whole.