Method or not: it’s still madness

A scathing response to our sports editor’s defence of David Moyes.

If you’re reading this, doubtless you’ll have also read this article by the Stand’s Sport’s editor, written at a time when things were looking up for United. My response comes during a bad spell for the Red Devils, but I can assure you that I’ve had misgivings about the new manager since his appointment all those months ago. Where to begin?

First of all, I’ll agree that succeeding Fergie was always going to be the hardest job in football – I’d even go so far as to call it a poisoned chalice. Correspondingly then, you would’ve expected his replacement to have a trophy or two on his CV; and no, the old Second Division doesn’t really count. My personal football trophy cabinet equals that of David Moyes’, and that’s not counting my impeccable ten-year stint on football manager.

Moyes’ backers, your Editor included, always make the point that he did a great job with Everton, considering how little he had to spend. However, Martinez is doing an equally good job (for equally good, read better, as the midweek game showed), with a similar budget (But half his signings are only there on loan! – Ed). The problem, as far as I can see, is that because Moyes never had money, he never learned how to spend big. The way he courted Fabregas – so openly, in the full view of a ravenous media, which revels in United’s every setback – couldn’t have been further from the behind-closed-doors, avoid-the-press-til-the-deal’s-done approach of his predecessor. And did somebody mention Fellaini?

Last year, I was one of those United fans that called for his signing, partly because of his stellar performances for Everton, and partly because of his hair. However, I expected a bid before his release clause expired; I didn’t expect him to cost £28m. I don’t know if I’m still stuck in a pre-Abramovich mind-set (2003), where you could buy the best player in the world – Ronaldinho – for €30m, but to me, £28m seems a bit much. That we signed him (late) on Deadline Day, after failing to get Fabregas and Thiago, and while our rivals signed the likes of Ozil, has desperation written all over it.

The worst thing is that Moyes absolutely needed to make a statement of intent – something to stop players wondering if United would still win trophies; something to show players around the world that, though Fergie was gone, United weren’t going anywhere. Signing one player, for far more than he’s worth, ten minutes before the window slammed shut, is not how you do that. And as our only real signing, the onus is on Fellaini to reproduce his Everton form week-in, week-out, and he just hasn’t – he has consistently been a yard or two off the pace, he seems too slow to play on the counter attack, and doesn’t get around the pitch quickly enough to constantly pressure opponents. 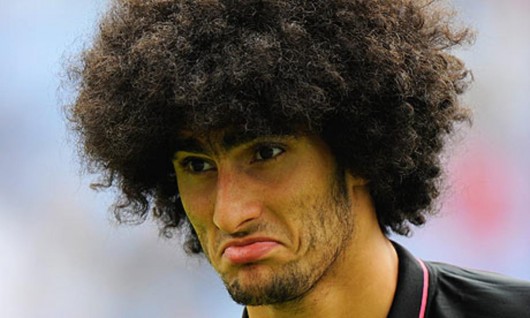 His hair may be amazing, but his form has failed to match it so far…

Onto Moyes’ actual management, then. I can understand a rotation policy, one of the things Moyes did well at Everton was bringing youth through the ranks (a certain Wayne Rooney springs to mind), and he has to be commended for having the guts to start Januzaj. However, is it just me (and it isn’t, Jurgen Klopp has similar thoughts) or is Kagawa wasted on the wing? He had twenty minutes or so in the centre of the park against Real Sociedad, and was a changed man.

Kagawa is symptomatic of a larger problem for United: we are the only top team that still plays traditional wingers (find me a winger more old-school than Valencia), yet none of them seem to play well, week in, week out (I should point out that at least old-school wingers could get their crosses off the ground, Tom – Ed). Nani, as the previous article notes, plays well occasionally, but the less said about Young the better. Sure, they were both good a few years ago, but injuries (and arguably, lack of talent in Young’s case) have meant that they certainly no longer possess the quality necessary to play for Manchester United. Perhaps it’s time, at least until Zaha comes of age, to move away from playing an unbalanced, one winger formation, to a system that would get the best out of Kagawa, Rooney and Januzaj,

Formation gripes aside, my single biggest criticism about Moyes’ tenure so far has been his conservatism. Put simply, he is scared, petrified, of losing. His team selection against Chelsea was incredibly defensive, and we were spineless against the old enemy in Liverpool – Carrick and Cleverley, arguably solid defensively, offer very little going forward, and the hapless Young on the flank didn’t exactly scream attacking intent. Things picked up somewhat against Arsenal, but I’m still not convinced the fear has gone. Why? Simple: substitutions.

The game against Southampton, though earlier in the season, is a case in point – we had a 1-0 lead, the defensive performance was solid, but instead of going in search of a second to secure the victory, Moyes took Nani off for Giggs, and replaced Rooney with Smalling (the latter in the 87th minute), disrupting the defence at the worst possible time. What positive difference could he possibly hope Smalling would make in the space of three minutes? What’s even more worrying is that we conceded a late goal – spending injury time camped in the opposition’s box is supposed to be our trademark.

Speaking of late comebacks, I can only think of one this year, and that was against Stoke – a team we shouldn’t have to come from behind to beat. Recently, the most galling thing for me (and I imagine, the most pleasant thing for all non-United fans) is the limp nature of our performances, especially against Everton and now against Newcastle. When was the last time United not only lost two on the bounce, but lost with so little fight, so little conviction?

Even with these misgivings though, United can’t afford to be seen to panic and dismiss him early, so whether I like it or not, Moyes is here to stay – and, as every supporter should be, I’ll be behind the team, even if I’m not behind the manager.

I know it’s not even half-way through the season – I never thought I’d say this as a United fan – but this year, I’ll settle for second best.