The Philosophy of style part 3: colour and individuality

A common misconception in modern day culture is that defying convention equates to Good style: ‘If I wear the brightest colours, or all black, or the most layers then people will think I’m cool and original right?’ Wrong. Unfortunately, doing the thing that everyone else isn’t doing, isn’t in itself a means of achieving an image with that special spark. Sound confusing?  Here is a picture (of an anonymous individual) to help me explain things better. 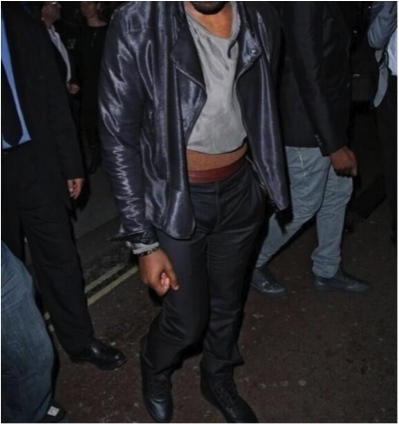 First of all I’d just like to clarify that the individual in the photograph above is a male (for those readers who were justifiably confused). Now, a lot of people would be very quick to criticize this crop-topped fellow, and although I am most definitely one of them, I am more hesitant. I happen to have seen a number of this person’s outfits (not that he’s a famous rapper of anything) and quite frankly he gets it right a lot of the time. My question, however, is whether this person woke up on this particular morning and genuinely believed that this combination of items was aesthetically interesting? Or, just woke up and ensured he wore the thing that no-one else would be wearing? (Possibly even stealing it off his pregnant girlfriend, but I’m just speculating). My suspicion is that this person focused on one of these things at the expense of the other, and it is this reason why I am critical.

That being said, although convention (regarding style) isn’t something to be actively defied, it isn’t something that we should be constrained within. Style is something that evolves, and evolution is only possible if every now and again someone does something outside of the box. However, that’s not to say that us boys should hit the nearest Topshop and buy out the crop top and leggings section (as quite frankly, that would be silly). Instead, the happy medium between these extremities is to ignore convention. Be creative, be yourself, and experiment with colour and shape and contrast to achieve the best aesthetic flair, neither purposely opposing convention, nor making special efforts to remain within it. Naturally then your outfit will stand out, and who knows, you may even be a trendsetter. I was spoilt for choice this week, so I chose two stylish St Andreans. 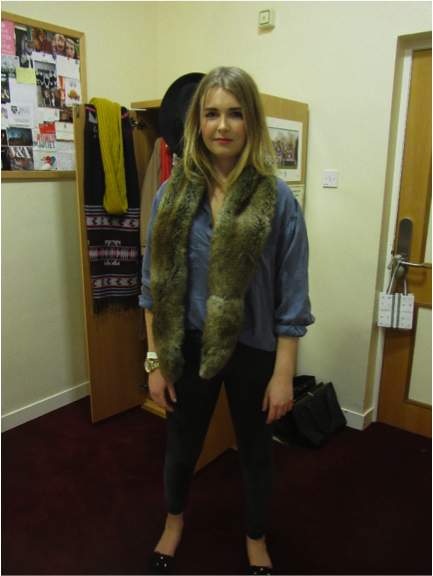 Suzanna was looking feisty this week (for all we know, she may have killed whatever animal that is around her neck with her bare hands!) In all seriousness, however, this outfit is simple but effective. As she has tucked in her oversized blue shirt, and rolled up the sleeves, there is a lovely sense of bagginess all around her top area which contrasts nicely with the tightness of her skinny jeans. By casually donning this poor dead creature around her neck (nobody give the RSPCA her address) she is making a bold style statement. However, it is clear she is wearing it for the positive aesthetic effect it has upon her ensemble, and not just to defy social norms. 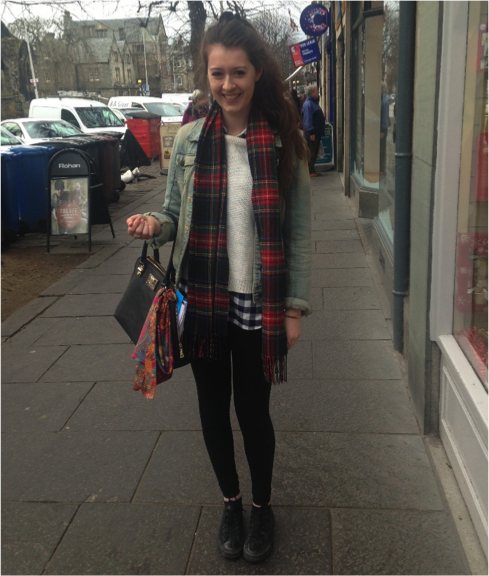 No other word than hip could describe Morgan as she strolled through town in this outfit. So hip, that I just couldn’t resist tapping her on the shoulder and asking for a photograph! What’s interesting about this outfit are the layers, which create an interesting mesh of colours. Not to mention the fact that everything is so neat and proportioned which makes the outfit simply pleasurable to look at. Most importantly, however, there is clear sense of Morgan’s own special touch. Simple, seemingly insignificant things, like slightly rolling up her sleeves, tying a colourful handkerchief to her bag and having her scarf flow openly gives her outfit a unique essence.