Sun, sport and a bit of booze. What more could you want?

Last Sunday (November 18th) St Andrews was host to the second Scottish Student Sport Mixed Doubles Tennis tournament, held on the AU courts from 11 am to 6 pm. It was a beautiful, bright and sunny Scottish day (honest!) filled with many well-placed volleys and powerful ground strokes. A selection of the latest electronic and house tunes (and the occasional Taylor Swift jam) got everyone’s adrenaline pumping. The BBQ grill was fired up with burgers and sausages; crisps, tea and coffee were available for the essential breaks in between rounds, making time for banter and mingling with aspiring tennis players from universities around Scotland. 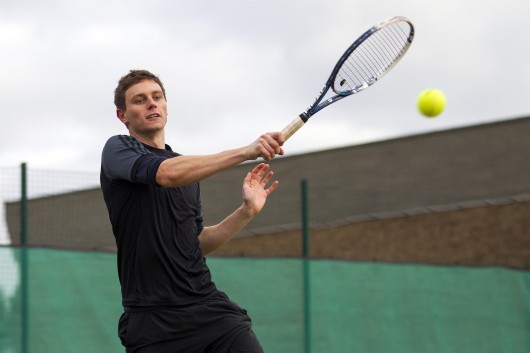 Overall, more than 30 players from 5 different universities competed for the second SSS sponsored cup this academic year. The stakes were far higher than that, however. The players were also competing for elusive prizes of an alcoholic nature; motivation indeed to battle through the hot weather. Crates of beer, Prosecco, and bottles of wine had all been spotted as potential prizes. Perhaps that’s what they promised Andy this year if he won Wimbledon – he did seem particularly motivated this time around!

The matches began with a round robin game with groups of 4 or 5 pairs. Each game lasted 20 minutes, and at the end of the first round each pair’s total victories were tallied to form new groups for the second knockout round. Then the best of the best competed in the Finals. There were some very tense moments when everyone watched along the sidelines as the final points of a match progressed. That said, the general mood was a relaxed one (probably all that alcohol – Ed), as players from different universities got to know each other. The structure of the tournament allowed everyone to play several matches and avoiding any long waiting periods.  Everyone was meeting a lot of different people and this somewhat alleviated the competitive pressure to create an amicable ambiance. 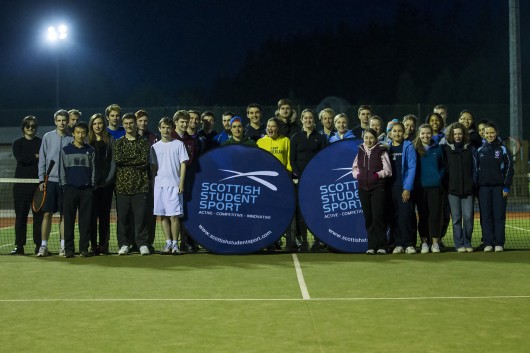 Aberdeen University went home with the Best University title accompanied by a lovely crate of beer and a bottle of Prosecco. The overall second place winners Jiaqi Shi and Aidana Saudabayeva, who took home a bottle of wine and some brand spanking new tennis balls, while the overall first place winners Emily Tupper and Alastair Maclachlan, who took home a batch of tennis-themed cupcakes and new tennis balls, making St. Andrews proud (Wait, so the runners up got alcohol and the winners didn’t? Who organised this again? – Ed.)

Ben Pearson-Stuttard, the Scottish Student Sport tennis chair, took the reigns in organizing this tournament, forming a small committee involving university tennis club committee members Emily Tupper, Craig Stevens, and Euan Mackinnon. The tennis club members did a fantastic job in keeping the competition organized throughout the day. The SSS hosts tournaments and competitions every month for people of all skill levels to participate, in order to give students below team level the opportunity to build up their confidence, get some experience and have some good fun. Find out more about the SSS from their Facebook page here, and see full coverage of the event by photographer Craig Doyle here. Don’t hesitate to get involved!