Maths doesn’t fit into my equation…

When I applied for my arts course, I did so fully expecting that my life would be a sexless and emotionally scarring year spent crying non-stop in the corner of the library. That is what I signed up for, and that is exactly what I wanted. So that is how my year started. No early morning lectures – well, I have an 11am on Monday but I’ve never been – no forced socialisation with people in my class, and, above all, no maths.

To my horror, this blissful ideal was destroyed more brutally than a tramp wandering in front of a high speed train when it was revealed that I had to learn statistical analysis. Despite serving my aggressive and often irrational poker strategy without fail in the past, my face dropped in horror, to such an extent that my tutor paused mid-sentence to ask if I was ok. I really wasn’t.

Now that I was down as the maths dunce of the class, my plan A of pulling a sickie was out the window. So that’s why I’m sat in the library pouring over some incomprehensible shite. Naturally statistics is full of numbers, which is enough of a pain, but some devious scientists decided to encroach on my rightful territory by inventing words that make no sense. Words like kurtosis, which sounds like some sexual disease you’d pick up after a LADs holiday to Corfu that makes your bawbag grow wings. 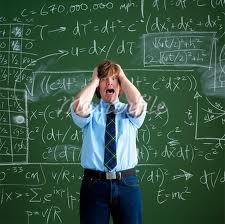 This just begs the question: what kind of psychopath would take a Maths degree? Five years of essentially taking numbers, changing them, and admiring the new numbers, marvelling over it like a child with its first turd. In any sane world, anyone who actively chooses to spend their days doing this would be sent to a far-away island to engage in a Hunger Games style fight to the death for the amusement of us sane folk. Although, knowing Maths students, they’d probably spend their time building a harmonious society through their shared love of integers and differential equations instead of stamping on someones’ head until the brain is squished to a pulp. Weirdos. Maths students always say ‘well, at least we get a job at the end of it’. Shut up, just shut up. If I went on Britain’s Got Talent and murdered someone on live TV I’d be all set for the luxurious life of a celebrity, but it just ain’t worth it. Taking a Maths degree is literally the same as this.