Awarded Best Stall at last year’s Fine Food Fayre for her deliciously innovative gluten-free bakes, Mandy Thomson of local business Alchemy & Cake tells us how she approached a successful and enriching life of entrepreneurship in the food industry, and how she would encourage everyone else to do the same.

For some reason, the possibility of pursuing an independent career as an entrepreneur is, not so much dismissed but, perhaps forgotten about by the majority of graduates in this country. In contrast to her New Zealand homeland, Mandy has always felt as though the UK places too much emphasis upon graduate scheme enrolment, on the importance of creating the perfect CV and in preparing for those nail-bitingly intimidating interviews… Rather she would encourage young people to consider identifying a passion, and then allowing that passion to flourish through the independence and freedom of self-employment.

A daunting leap of faith? In Mandy’s eyes it need not be; she strongly believes that we, as a generation, should think more for ourselves – that we should have the courage to try out our ideas and simply move on should they not quite come to fruition!

Upon completion of her degree in Social Anthropology from the University of St Andrews and her subsequent Masters in Gender at Edinburgh, Mandy became frustrated at how difficult it was to secure a career in the field she wanted when faced with the prejudice of being a single mother. So she followed her passion for food, setting up her first gourmet vegetarian restaurant in the heart of Edinburgh. This was followed by the opening of a bar just a few years later, until she decided a part-time career would better suit her return to studying, and thus Alchemy & Cake was born – a rather unusually intriguing name that aptly highlights the creativity and experimental nature of her business. Defying the rules of MasterChef 101, Mandy claims that with enough experience, the art of baking can (and should be) much less fussy; that experimentation is the key to the perfect sponge, and that a set of weighing scales is by far obligatory! 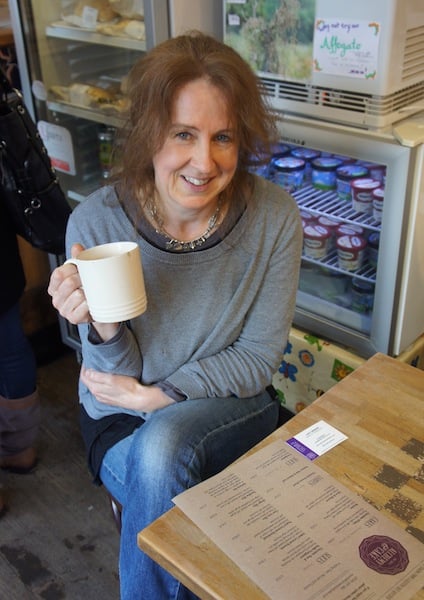 All that was needed to kick-start what would soon become a relatively small-time yet thriving business was a bit of organisation, motivation and the courage to approach local food shops with samples and menus. Mandy was lucky to find a niche market; with the objective of creating indulgent sweet treats that contain no gluten for the sake of promoting a healthier lifestyle, her cakes make no compromise on flavour, and are entirely of her own creation. Nevertheless, she still faces the challenge of convincing everyone that no-gluten, no-egg, no-dairy, no added sugar cakes can still be as scrumptious as any other baked goods, if not more so with the addition of carefully selected, organic produce.

Cooking from her mother’s kitchen, she now has a business that complements her family and private life perfectly; she spends a mere three days a week baking (something that has and always will be a hobby of hers) and then supplies her cakes to various cafés as ordered, including Gorgeous on Bell Street. A truly inspirational and desirable lifestyle, I must admit.

Alchemy & Cake had a stall at RAG Week’s Fine Food Fayre just last year and, after finding it to be such a “great, positive experience”, will be visiting us again, this time on Sunday 9th February 2014.

If you have been inspired by Mandy’s story and would like to try your hand at starting up your own foodie business, it’s not yet too late to enter our Entrepreneurship Competition to win your own stall at our Fayre in February! For more information or to submit your ideas, please go to our website, like us on Facebook, follow us on Twitter @FineFoodFayre, or simply email us at press@stafoodfayre.co.uk. Entries must be submitted by 15th November.

If you would like to sample some of Mandy’s delectable delights, why not like her business page on Facebook, send an email to mandy@alchemyandcake.co.uk and then head on down to Gorgeous on Bell Street for a slab of her salted caramel brownie?