A look back on yesterday’s staff strikes.

Yesterday members of staff and students gathered in protest across different locations in St Andrews. Their grievance is the 13% pay cut imposed by their employers, the Universities and Colleges Employers Association.

This uproar from University staff is nationwide and all three of the representative unions – UCU, Unison and Unite – have come together to show their disapproval. Two days ago they met their employers for an eleventh hour of talks in order to avert Thursday’s strike, but the two parties have evidently not come to a compromise yet.

The Stand followed one of the more sizeable protests at Church Square where physicist Dr Chris Hooley led a group of staff members from every part of the University, from the Spanish to the estates department. 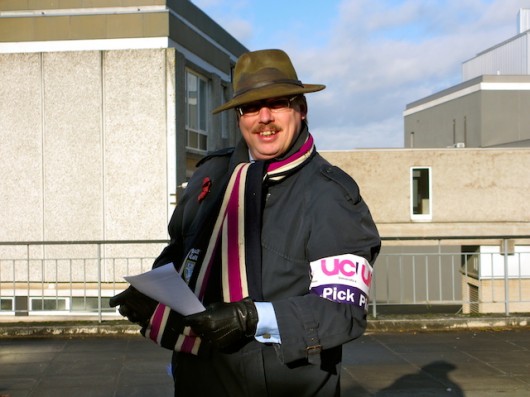 The group’s main speaker, Steven Reicher of the Psychology department, delivered a short but powerful speech on the gravity and injustice of these cutbacks.

“What can be more important than [the University’s] people?” he asked the crowd. “Universities are about people… we want fair pay.”

He further protested against the University’s abuse of the staff’s good will, as they work extra hours over the weekends and over holidays, some even under zero-hour contracts; he said that if things go like this, soon people won’t be able to afford to become academics because the pay will simply be insufficient. 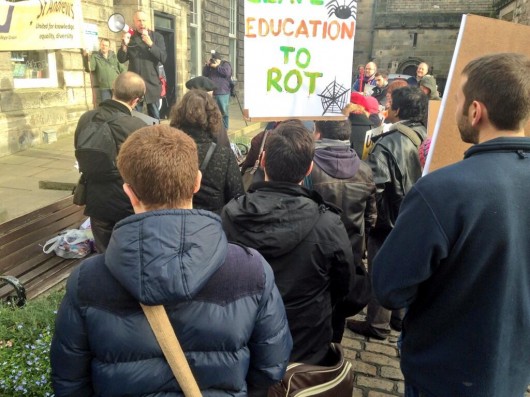 However, much of the student body was unaware of the protests and some were even annoyed.

One post-grad told The Stand, “I don’t really know much about it. In fact I don’t really know what’s going on.” And an anonymous management student commented, “I’m pissed that my classes have been cancelled this week because of this.”

The Stand will keep you updated on any further developments.