Review: Not Another Happy Ending

I saw this film while working at the Edinburgh International Film Festival. It was the feature chosen for the grand closing event at the world’s oldest continual film festival. And it sucks.

Karen Gillan, the Doctor’s former assistant, plays Jane Lockhart who hits the big time with her semi-autobiographical debut novel. Her agent Tom (Frenchman Stanley Weber, chosen for his looks rather than his talent) changes the book’s title which enrages Jane. Apparently nobody told her that writers have very little say once they’ve signed their contracts, and her celebrity boyfriend and considerable pay check aren’t enough to placate her. When Jane gets writers block with her sophomore novel, Tom randomly decides her dead end is caused by her happiness. Naturally, he pledges to make her miserable to speed the writing process. 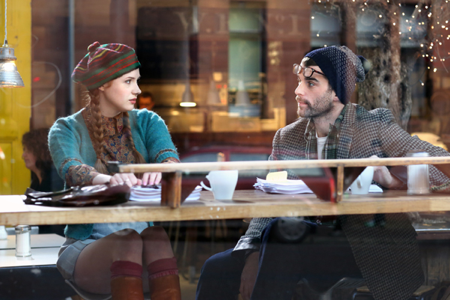 Anyone who has watched at least one movie should see the outcome by now. Fiery Ginger and handsome Frenchie argue constantly, but their fights mask the fact they are really just in looooove. Romantic comedies aren’t known for their ambition, but that doesn’t mean they should be filled with clichés. About Time had some tired stereotypes, but the time travelling aspect was new and intriguing. Not Another Happy Ending tries to do something new when it brings the main character of Jane’s books to life as her invisible confidant. This could have been an interesting twist but the character is dropped in for just a few minutes in total, giving the impression that she’s an after thought. Instead of providing a twist, it leaves us doubting the mental stability of our heroine. 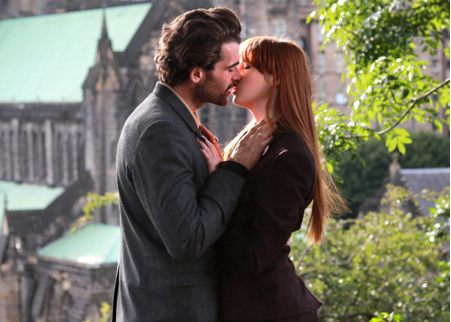 I could somewhat excuse the film’s predictability if the relationship itself wasn’t completely unhealthy. Tom sets out to systematically destroy every aspect of Jane’s life, even trying to ruin the delicate relationship she has with her father. There’s a difference between a relationship based on passionate disagreements, a la When Harry Met Sally, and one based on borderline sociopathic tendencies. Eventually, Tom realises that he’s acting out of love for Jane (big surprise). Maybe I’m being cynical, but my idea of romance doesn’t involve a man attempting to ruin my life because he “loves me so much.” Buy the girl some flowers and take her to Nandos, don’t break in to her apartment and threaten to kill her dog. The worst part isn’t Tom’s nonsensical actions, but the fact that Jane loves him in return. While most sensible women would file a restraining order on his perfect cheekbones, she’s making moon eyes at this stalker.

There’s nothing wrong with entertainment. Winning an Oscar is great and all, but the industry would collapse without crowd pleasing romantic comedies. However, there is something wrong with mindless entertainment. Not Another Happy Ending relies too heavily on cliches and doesn’t think through it’s plot. Karen Gillan will probably be hoping the Doctor scoops her up in his TARDIS and takes her back to a time before she made this weak film.