Colourful trousers. Like Marmite or Made in Chelsea, you either love ’em or hate ’em. There has been an element of angst against such pieces of clothing, branding them ‘dividers […]

Colourful trousers. Like Marmite or Made in Chelsea, you either love ’em or hate ’em. There has been an element of angst against such pieces of clothing, branding them ‘dividers of class’ rather than the personifications of sass that they are. I, however, wish to defend their honour. Rarely is there an item of daywear sexier than a well-cut pair of colourful trousers. I can’t think of a better way to subtly (or not so subtly) demand attention. Like moths to a flame, a bright pair of trews zone you in. I don’t mean that in a sexual way (although sometimes ‘dat ass is fine). Once you notice them, though, you tend to notice the person wearing them.

So boys: if you want to get the girls, put some flamboyant colour on those legs. A boy in bright yellow trousers in the library caught my eye last week. You know who you are 😉 Fancy a coffee?

I know I’m not alone in having a penchant for the coloured trousers. Surf Spotted in St Andrews and you’ll see many complimentary quotes regarding brightly trousered gents: “It might have been the red trousers and the green and white scarf that caught my eye, but it was the undercut that kept me going. Wanna be hipsters together?”. We can’t resist; there’s something about them that screams raw sex appeal, fun… and potential. Having said that, trousers can scream also “d-bag” from a mile away. It all depends on what colour they are and how you wear them. Thus, I thought I’d compose a viewing guide on trousers and what they say about you (NB: includes cords). 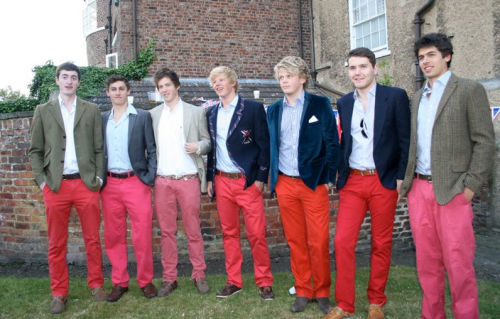 Congrats! You’re a St Andrean! The staple of many a wardrobe, if not most. You feel comfortable in your own skin, particularly in tweed, too. Red is synonymous with approachability. They scream fabulousness as well as a nod to classicism. The shade of red you choose only goes to prove what level of sass you’re on. Deep red = thoughtful, classic. Tomato red = ‘edgy’, yet still a traditionalist. 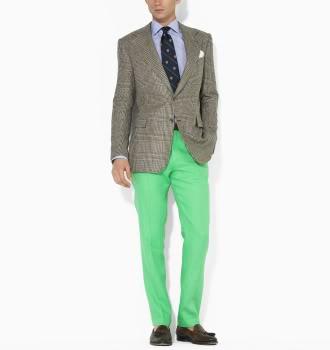 Deep green? You have your own style and you’re not afraid to show it. You’re proud of your fashion selection and you know that green can’t hide. Work it. Light green? You’re definitely making a statement. A light, apple green demands attention, yet is subtle enough so not to make people scorn. 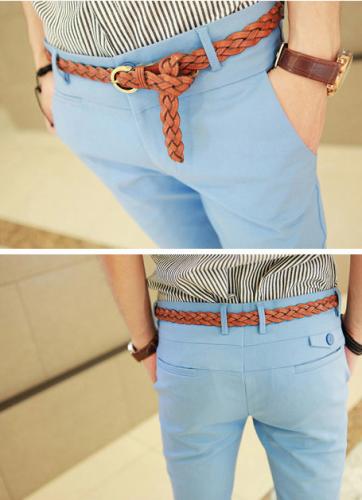 When I say blue, I obviously mean sky blue – this is a great colour. Initially, it says you have an understated style, which has the ability to go with the flow. On closer inspection, however, it says you’ve got bucket loads of “suave”. Blue is the way forward. Blue can help you make a bold statement (in a silent but deadly way). Bond wears them. Enough said. Carry on my blue trewed son. 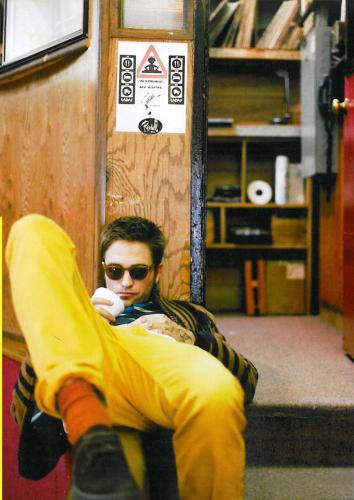 Damn. From buttercup to custard, these trousers are a rarity, which really is a shame. It takes a certain kind of figure to carry off the yellow trew. To be entirely cheesy, they do brighten up our day. If you can pull these off, you’re a fun-loving guy who knows where he stands and what he likes. Confidence, style, and #swag. You go Glen Coco.

As the fashion guru Scott Disick (of the Kardahsian clan) says, “You say real men don’t wear pink? You obviously don’t know any real men”. It takes one hell of a man to wear pink. By God, it’s sexy. 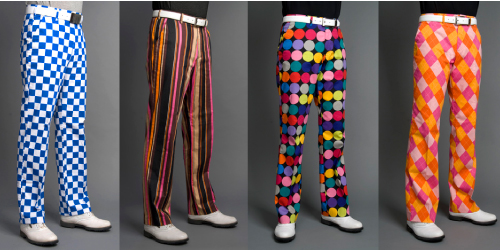 So there we have it, whatever colour or style, the trews maketh the man.