Got the new Bowie album yet?

In case you’ve been living on another planet or actually, if you’re unaware that David Bowie has just released his first album in ten years, then you’re probably dead… or […]

In case you’ve been living on another planet or actually, if you’re unaware that David Bowie has just released his first album in ten years, then you’re probably dead… or living in Dundee, which is almost the same thing.

Social media sites, music magazines and review shows have wilted under the infernal white-heat of an almost unprecedented cultural meltdown. The euphoria that greeted the news of Bowie’s unexpected return has been matched by the critical hyperbole that has engulfed the new album; it’s difficult to imagine any other comeback that would result in album reviews posted as liberally coated suppositories… perhaps if John Lennon were to rise from the dead to announce the imminent release of a track entitled ‘Leave Yoko the Fuck Alone’.

So, the Thin White Duke is back. Is the album as good as his fans say it is? Bowie’s fans are a devoted and impregnable bunch; only Bob Dylan has a fan base comparable in loyalty and blind devotion. (#Beliebers?) They are not to be toyed with, but they’re not to be trusted either. Bowie could record a festive standard with an ageing crooner and introduce an animated feature about a Snowman without an ounce of his patented cool being diminished in their eyes. Not exactly the type of ventures that you’d associate with an artist regarded as the singular most original to emerge from these islands, a tsunami of androgynous sexual energy and crackling creativity. He was… once.

I like Bowie; Hunky Dory (1971) would be one of my Desert Island Discs albums and Ziggy Stardust remains the most inspired alter-ego in the history of music. But I would argue that the Crosby duet, The Snowman and the ‘Dancing in the Streets’ Band Aid cover with Mick Jagger suggests that he is aligned much closer to the mainstream than the popular perception of the man would have us believe. He’s not exactly the musical charlatan who consistently reinvented himself to suit whatever happened to be the popular vogue of the time (Glam/New Romance) as his detractors claim, but there has always been an element of calculation and control that you wouldn’t find in, say, Iggy Pop. 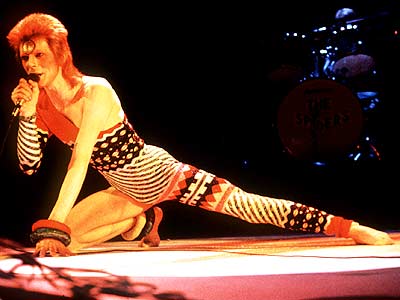 The return of a British icon of such magnitude should, of course, be celebrated wildly, but the lithe, dangerous, unpredictable animal that could include the words “bibbity bobbity hat” in a song and still emerge triumphant is long gone.

And the new album? It’s all right.