Sabbing the time of their lives: A memoir

By the end of the week St Andrews will have a new sabbatical team, 5 individuals will emerge from the shadows and don their gowns to become sabbatical superheroes with […]

By the end of the week St Andrews will have a new sabbatical team, 5 individuals will emerge from the shadows and don their gowns to become sabbatical superheroes with the power to shape our student experience in the coming year.

The Stand spoke the to the people who’ve been there and done that. Past and present sabbs revisit their election campaigns, share anecdotes from their time in office and explain what newbies can expect to face. Forget the serious stuff, we’re dealing with the froth here..

“There was that the time I compered a fundraising evening with HRH Wills and Kate. ‘To Your Royal Highnesses, Chancellor, Principal, Lords, Ladies and Gentlemen…’ is the longest introduction to the room I will ever have to make. I was also part of the academic procession leaving the high altar at St Paul’s Cathedral and, when everybody else turned right, I turned left. Talk about a walk of shame, I disappeared down a cloister and hid with much haste.

Potential presidents can expect a lot of hard work, meeting a lot of people and many meetings where the main objective is to successfully pocket as many biscuits from the refreshments as possible. Oh, and being a Trustee of one of the foremost research Universities in Europe is pretty cool.

With eight thousand students to work for, you’ve got to work hard if you’re going to deliver. The most important part of the job is demonstrating a constructive attitude to working with other groups, particularly the university.” 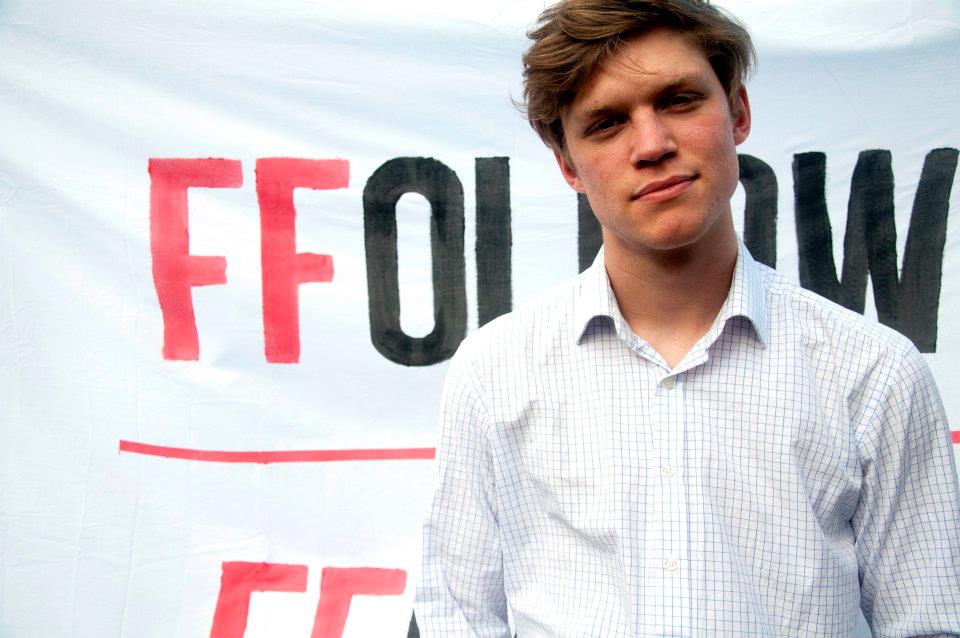 “My campaign team did keep sneaking off on risqué campaign moves which I might not have approved of, ranging from ‘Get Bare for O’Hare’- almost nude poses on the beach (male and female), to rollerblading leafleters, and a mock-Irn Bru advert with James Toolan painting on a goatee to play me! There was high drama on election night too, as a last minute complaint was put in against me (for going door to door) and we had to see how that one would play out. 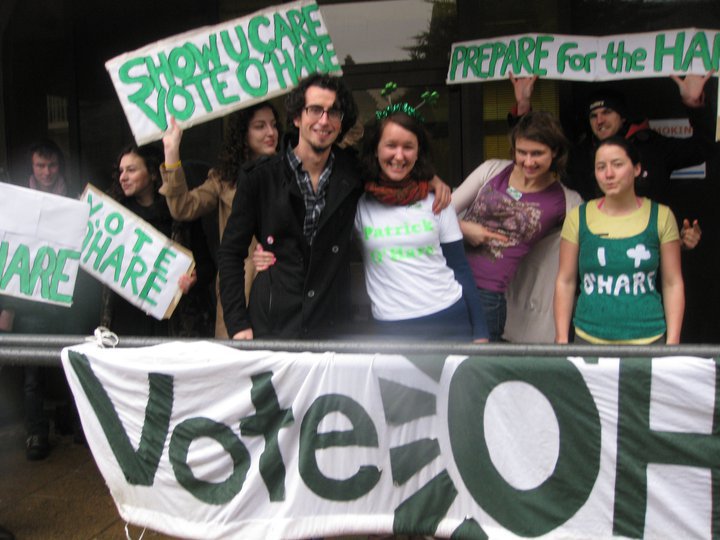 There are plenty of stories from the year in office but ‘soapgate’ and ‘muralgate’ are perhaps most memorable. In the first, ‘FoulPlay’ (Sam Fowles) discovered a product being marketed as ‘Brothel Soap’ in the University shop and rushed to make sure that the promotion of prostitution by our venerable institution was halted immediately. He dramatically slammed it on to the table during a meeting with the Principal, leading to outrage and before you could say bordello, the whole stock had been recalled. Still got a bar as a memento, it stinks!

In ‘muralgate’, the mural commissioned by Rollo in the Main Bar and entrance, belatedly came to the attention of the Principal, who (like some kind of smoking gun) produced photocopied pictures of offending parts at a high level University meeting. I was suddenly compelled to defend poetic passages such as ‘Triple X Vids, Fun for All the Family’, in front of bemused and horrified University figures. No, it wasn’t pornography, I tried to assure them, but rather critical commentary on our hyper-sexualised society (or at least that’s what Rollo told me). Eventually we had to contact the artist so that he could paint over the offending parts, which he did.”

“Most of my campaign seemed to revolve around my campaign manager’s paroxysms of terror that I would say something stupid every time I spoke to a voter (not that unlikely to be fair…).

I couldn’t tie a bow tie until half way through my term as Dorep, which was pretty awkward as you have to wear one for pretty much every formal occasion. In the end Ming Campbell, (MP and Chancellor of the University) taught me to tie one on the toilets of Younger Hall before the November graduation. As he walked out he turned around and told me never to wear a clip-on because ‘remember son, a gentleman always ties his own tie…’ I’m pretty sure he had no idea who I was but it made my day.” 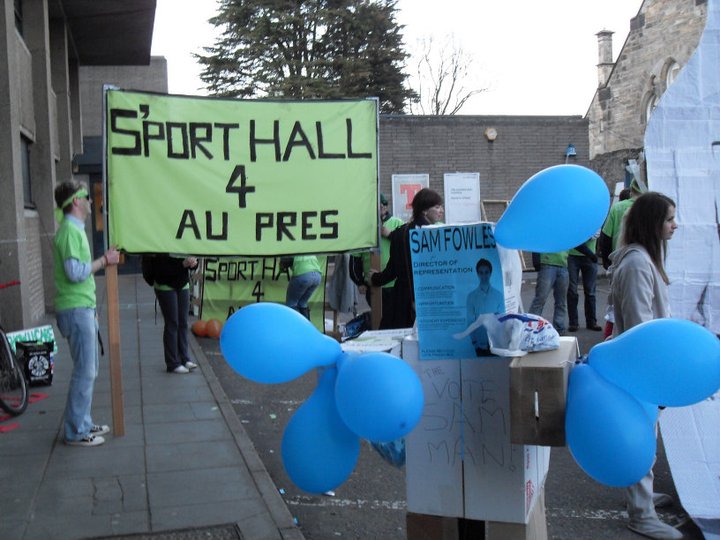 “In terms of the election campaign, I can’t think of anything particularly banterous, although I would say that it helps to be positive, and be grateful to those who’re giving up a chunk of time for you. Keep it lighthearted where you can, it’s not the biggest deal in the world. I’d also say it pays to be creative on the campaign trail – a lot of the ideas my team cooked up have been repeated (some improved upon) in the years that followed, which is a compliment I guess – It’s a great opportunity to exercise your creative juices, which in turn gets people’s attention.

I’d recommend any successful candidates to be wary of dropping their pants in the office, during office hours – Dave [David Graves] discovered the hard way that the door is not always locked when you think it is.

I’d advise any candidates that they can achieve a huge amount, if they’re willing to put a lot of work in, and that it’s a crash course in learning the balance between ambition and compromise.” 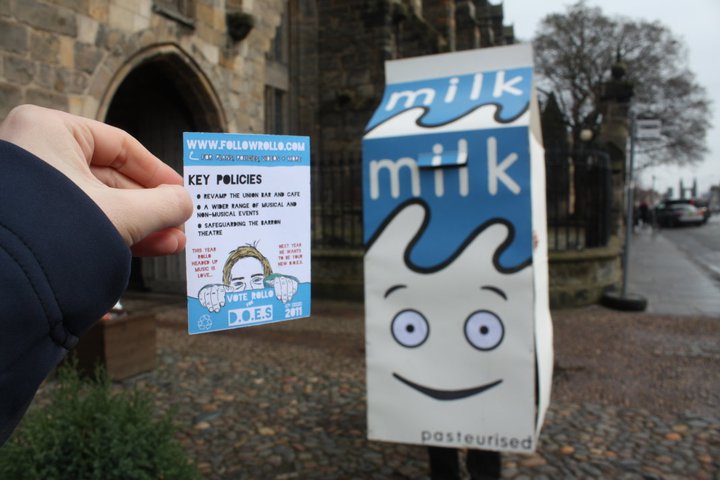 “During my campaign week I had to write two essays (all nighters!) because I decided to run so late on in the game!

I took a fake life-sized sheep  into the office which I got for my birthday- it was stolen within hours and not returned for about a month. I had ransom letters and photos (with the sheep in various locations all over town) from the sheep-napper throughout.

Presidents will need to expect to be very busy but to also have the most fantastic time working with clubs and with great Saints Sport and university staff members. It’s been great to be involved with everything that goes on at the University behind the scenes.” 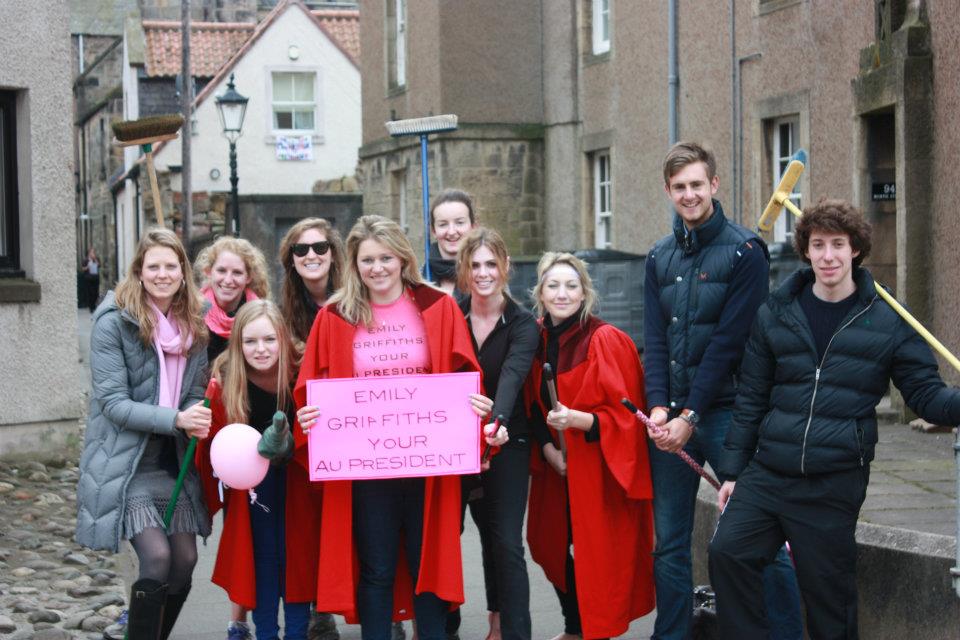