Netflix has officially confirmed that this May the Bluth family will return to my MacBook screen with 14 new episodes of ‘Arrested Development’, the greatest show ever to be taken […]

Netflix has officially confirmed that this May the Bluth family will return to my MacBook screen with 14 new episodes of ‘Arrested Development’, the greatest show ever to be taken off the TV. Netflix has announced that all 14 episodes will be released simultaneously, and pictures have been released of Tobias (David Cross) running around under a sheet, plus GOB (Will Arnett) on a cross. In anticipation of the Series 4 release, let us appreciate a few, which proved to television producers everywhere that there’s always money in the banana stand.

5. No Touching (There’s always money in the Banana Stand)

As George Bluth Senior tries, from behind bars, to lead his family through legal and financial turmoil, he learns the Lesson One of the Orange County Prison.

Oh how we’ve missed Tobias and his many professions. From Blue Man to Mrs. Featherbottom (which follows the exact plot Mrs. Doubtfire with a little bit of Mary Poppins thrown in), we’ve seen Tobias don a thousand faces, but nothing beats his stunt as an ‘analrapist’.

2. If This Tableau I Recreate…

Remember when Tobias thought that being a part of the Blue Man Group would save his marriage? Remember when he thought dating George Senior’s former secretary, Kitty, would make Lindsay jealous? Remember when they started to let Ron Howard get sassy in the narrator’s chair? Remember when the writers thought we weren’t paying attention anymore so they had Tobias start speaking in couplets? Me too.

A clip that needs no introduction.

But on the off-chance you were planning on doing this later, I have included an instructive diagram: 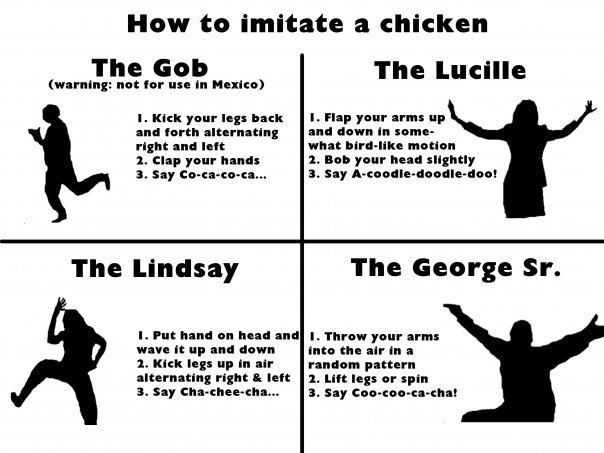