I’m scared that if we did a reflection piece on St Andrews every year, it would sound like a broken record. A bit like an M.C. Escher painting of a […]

I’m scared that if we did a reflection piece on St Andrews every year, it would sound like a broken record. A bit like an M.C. Escher painting of a scottish town where people dress like romanticised country gentry and speak like they belong to one of the more heinous scenes of Mean Girls; and where the only thing that distinguishes one big party from the next is if it is or isn’t at Kinkell and the charity it is you’re toasting your glasses to. We’re a town obsessed with the comforts of routine runs to Tesco and schweff/Facebook marathons in the library. But there were some unique events in Autumn/Winter semester 2k12, which, as I have just indicated, is noteworthy in itself.

The semester dates changed, and everyone relished in the chance to moan to the University about something new. Can we all agree that no matter the semester dates determined by the University, there is no one schedule that will please each and every student, staff member, or local? Yes, it sucked that Reading Week was cut but it seems that most people managed wedge in a trip to at least London, Dublin or Amsterdam for a long weekend.

I’m sure others will rush to gripe that this winter break was far too long, but I quite liked having a month of exam-free free time and home cooked meals that did not include Tesco’s finest ingredients. For those non-homebodies out there, it might not have been too miserable for you either. In celebrating the end of our endless first semester, some students dashed to Morocco, India and even Zimbabwe. I heard one particularly wealthy student managed to finagle their way onto a trip to Narnia. Totes jeal!

We had our fair share of starlets strutting the streets last semester. Bill Murray reportedly ditched his AA meeting to musically entertain the patrons of Mitchells, while Michael Phelps charmed the students stalking him at the Alfred Dunhill Links Championship. To our dismay, Phelps – as far as we know – failed to channel his inner Hugh Grant and stayed away from our university female population. The Situation of Jersey Shore even made an appearance at the Union – but there’s really nothing to say about that. 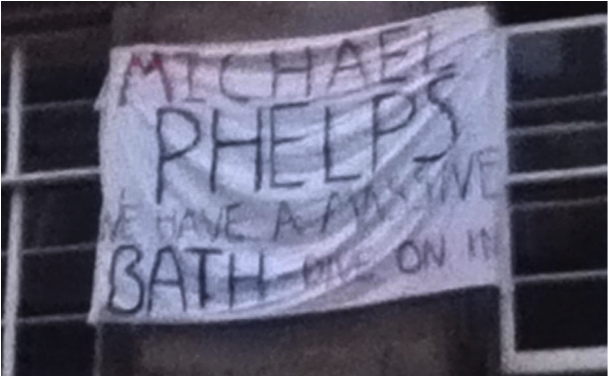 Tinchy Stryder’s Union performance – when he finally managed to sing a song without the sound cutting out – didn’t exactly start the semester’s music scene off well… But ohemgee, did you remember to download our dearly beloved Other Guys’ Christmas Single to help reach their #1Dream? If you didn’t buy at least 25 copies of it on Amazon, then shame on you. I hear the BACNOCs (Big A Capella Names On Campus) also plan to release a new record just in time for you to give it to your Valentine. If that doesn’t get you in the mood for some romancing on Cupid’s Day, I don’t know what will.

Well, I wouldn’t say it was a boring semester, but let’s try and make this one a bit more memorable, shall we? We should be getting psyched to drool over the eye-candy at the upcoming CATWALK, FS and DONT WALK fundraising-fashion shows. And we have our very own, brand-spanking new, mini festival in St Andrews, Under Canvas coming up this spring; not to mention the famous (or infamous…) annual St Andrean Oktoberfest. And if none of these upcoming events tickle your fancy, there’s always the birth of the future (and hopefully b-e-a-utiful) British monarch to look forward to.