For a sport that views triple twists as commonplace, the action that unfolded at the World Gymnastics Championships in Tokyo a couple of weeks ago shouldn’t have come as such […]


For a sport that views triple twists as commonplace, the action that unfolded at the World Gymnastics Championships in Tokyo a couple of weeks ago shouldn’t have come as such a surprise. But boy were there twists…

The biggest twist for the Brits came during the Men’s Team Qualifying. It would be fair to say that the boys had a shocker and failed to make the Team Final, a fact made even more surprising when you consider that they had qualified in 4th place for the same event at the 2010 Worlds. 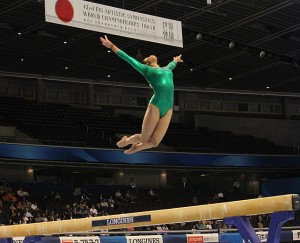 The women fared much better, having survived a scare in qualifying that saw them make the final with only one mark to spare. Come finals day however, they were much more impressive and managed an admirable 5th out of eight teams, with the Americans taking gold. They were once again led by their most experienced member, Beth Tweddle, who at age 26 is now being plagued by questions concerning her upcoming retirement.

This is understandable when you consider the age of the Women’s All Around Winner, the USA’s Jordyn Weiber’s. The 16 year-old is a massive Justin Bieber fan. This led BBC’s commentator Matt Baker of Blue Peter fame to gleefully enquire whether a “Weiber/Bieber” meet up was on the cards should she win. Though Weiber was the favourite from the beginning, her shaky bars performance however meant that she came under threat from Russia’s 16 year-old superstar Viktoria Komova. A nail-biting final round saw Komova performing last on the floor, the final piece of apparatus. It looked like she had done enough, and she clearly thought so herself as she produced a beaming smile after an excellent floor routine. But, her score of 14.333 left her just 0.033 points behind the elated Jordyn Weiber. Komova looked up in disbelief at the scoreboard as gasps rang around the arena before promptly bursting in to tears. 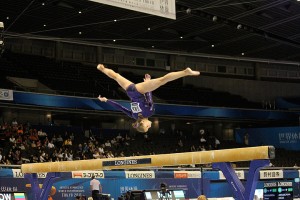 The Men’s All Around event was less dramatic. Once again, it was dominated by the Japanese star Kohei Uchimura who performed flawlessly to take the gold in front of his home crowd. Making up for his dramatic fall on the high bar, Uchimura took home his third successive individual All Around world title, confirming his place as one of the legends of the sport and certainly the most impressive gymnast of his generation.

Despite the high drama of the competition, it was ultimately a lacklustre championship for the Brits. Only the women’s team managed to secure their place at London 2012, whereas the men will have only one more chance to qualify at a test event next July. The individual apparatus finals also led to disappointment with Beth Tweddle finishing seventh in the floor final and missing out on the uneven bars final. This was a piece of apparatus she had been widely considered to take gold on. The only medal came from Louis Smith who took bronze on the pommel horse, although he himself admitted that it was “shaky”.

So after an uninspiring performance in Tokyo, questions are being asked of Team GB’s chances for London 2012. Will they be able to deliver when the pressure is really on?