He’s already had hundreds of emails

A Southampton third-year has been standing in different London stations every day this week, holding a sign asking for work experience.

The sign Josué is holding reads: "Motivated Southampton University student seeking work experience in management consulting. Kindly take a picture and spread the word! Only I can change my life. No one can do it for me."

This dude was at #LondonBridge station this morning, let’s help him out Twitter ♥️?? pic.twitter.com/VoywlclfSU

The original photo has been retweeted over 15,000 times and has even been reposted on the @imjustbait Instagram page. The post on there has been liked over 130,000 times. 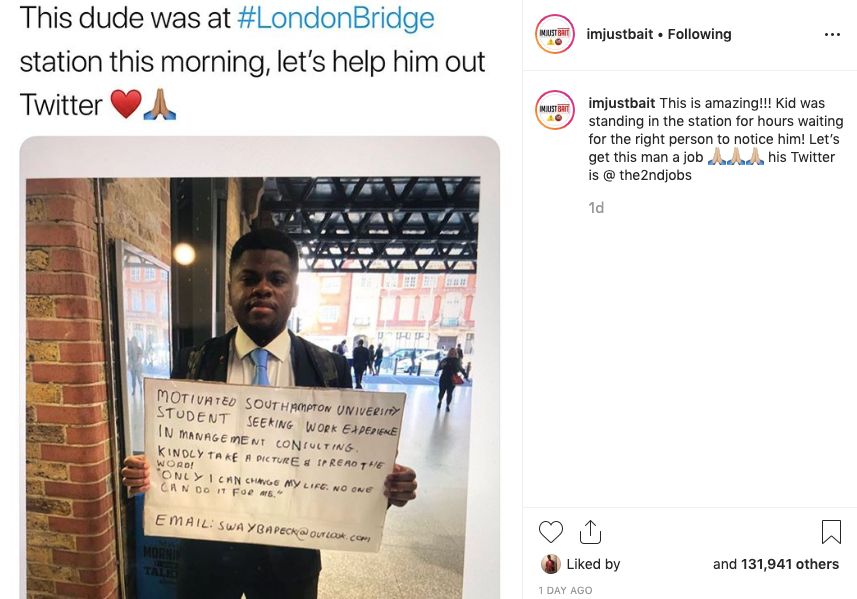 Josué told The Soton Tab: "I thought it would be a good idea to make myself more visible to employers by doing something as brave a this."

Josué has been applying for jobs and work experience online, but was frustrated by not receiving replies or feedback. He thought making the sign would be a good way of being seen by potential employers.

He said: "A lot of people were stopping and being really encouraging." One man bought him lunch from Pret, one lady stopped to talk and hugged him, and another emailed him to say she'd cried on the tube after seeing his sign.

Josué said everyone was either "really positive, or giving constructive criticism".

One lady advised him to change from a handwritten sign to a printed one, which he did after his first day:

For you idiots that were talking s*** about his handwriting, his sign just got an Upgrade!! if you have any opportunities for him his Instagram/Twitter is @the2ndjobs
And for the record he is not an idiot he has been applying online as well as using this method pic.twitter.com/AvT6N53E6h

Milly, who originally tweeted the photo of Josué, told The Soton Tab: "For me, what I care about most is supporting someone to achieve their dreams and it’s so humbling to see how there’s so much positivity and so much love from everyone retweeting and liking to help him.

"What I find so sad is there’s still so many trolls out there. It’s so sad that we can’t all want someone to succeed.

"I can’t comprehend people that don’t respect someone wanting to succeed and don’t want to support it because there’s no reason why not to."

Why is the new series of 'Skins' so horrifically awful?!

I let 1,000 Instagram followers control my life for 24 hours