‘I’ll find a cute dog to celebrate with’: Laura Elizabeth Barr is running for VP Welfare and Community

She says sexual consent is key to her campaign

Here's another election interview, this time with Laura Elizabeth Barr who is running for VP Welfare and Community. We asked Laura some questions about her aspirations and ideas for the role and this is what she had to say.

Why do you think you'd be good in this role?

I would be good in this role because I have already shown that I can can bring about change. I have led SCA (Sexual Consent Awareness) for the last two years, and within that time, I have led the first ever student consultation on sexual assault and rape at the university. I have also led multiple campaigns, including Movember Male Sexual Assault and worked with Yellow Door, and Survivors UK. I am currently in the Sexual Violence working group with the university and making proposals on how to improve the situation as we speak.

If you know me, you know I'm driven, practical and willing to work with anybody. I would be good for this role because, as a student, I understand the value of the student voice. I want to GIVE the students a voice and bring them into the conversation about the things that are affecting them. The relevant student communities need to be at every level of process and changes they wants to see in the Union and university.

It's been great to see so many people talking about this issue, but when voting, look at what the candidates have actually achieved outside of election period.

What is the most important point in your manifesto?

The most important point in my manifesto would be that I want to GIVE students a voice rather than BE it. I cannot tick every demographic, and I cannot understand to the same extent the issues that some minority communities face. I want to use my platform and the voice I have been given to elevate the students, to give them a bigger platform; this is the only way we can accomplish real change. Students are capable of doing amazing things and we shouldn't let a team of five speak for twenty-one thousand! I want to make sure the student voice is heard and campaigns and initiatives are being led by the appropriate people with my facilitation and funding.

What is the first thing you'd change if you were elected?

The first thing I would change is popping the SUSU bubble. There is at the moment a reputation that you get ahead if you're friends with the right people, and communication fails to go beyond those who are immediately engaged in the Union. We need to engage students outside of friendship groups and make people feel welcome, include their ideas and initiatives and build a community of solidarity in our Union.

What area of our Student Union do you think needs the greatest improvement?

Apart from all the points above, communication is the worst. As said above, there is a SUSU bubble, and people are being left out of conversations, not included in groups or initiatives that directly relate to them or what they are doing, and it can mean many societies feel left out, unheard and unwanted in the Union. This needs to be greatly improved.

What makes you different from the other candidates also running for the same position?

What makes me different is that I have 3 years of change, measured improvement and experience behind me making some real institutional change. Just today, SCA, Sarah Eames and SUSU received funding from the University to run a pilot scheme across the medicine faculty for consent workshops. It was my campaign as welfare officer in first year Chamberlain halls about sexual health that was then brought into the Union and carried across the years. I have built SCA up from the ground the past 2 years and led the first ever student consultation on this topic. I have done this with the help of SUSU and multiple other societies, but it has been a lot of hard work, dedication and effort, and overcoming resistance. When voters are considering who to vote for, they should look at each candidate and look at what those who are running have already done, rather than what they are saying during election period.

How would you celebrate if you won?

Cry. Drink alcohol. Cry some more. Find a cute dog to celebrate with.

I asked my best friend this question. His response was ‘pissing me off’. Not sure it’s much of a secret though.

What's the maddest thing you've done since being at university?

I made out with my Uber driver once. Does this count?

Chain smoking cheap cigarettes & a Kebab with garlic sauce. Makes me feel like i’m back at home in London.

What is your favourite Soton tab meme? 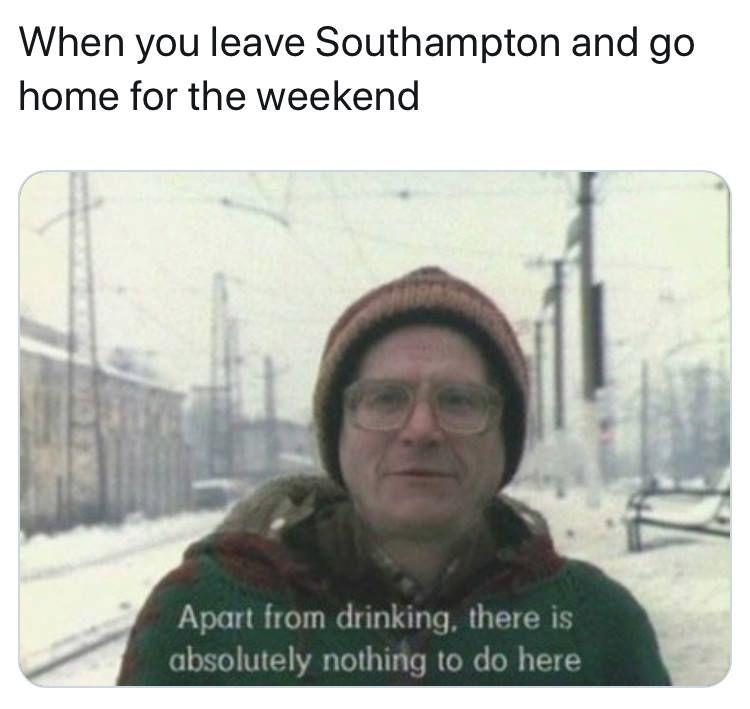 My family live in Wiltshire now so, when I go home its every night at the pub that has old men and cute dogs, pool tables and cheap pints. Not complaining though.