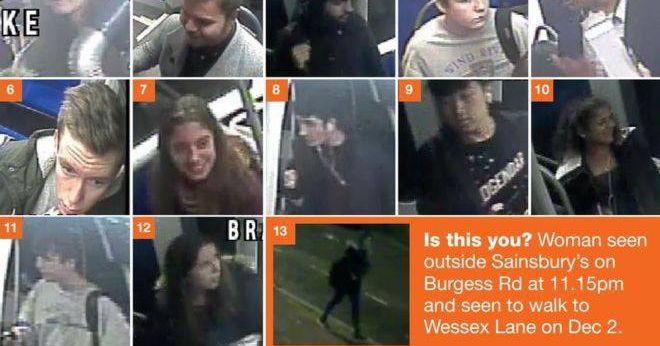 The incident happened two months ago, near Wessex Lane halls

Police have recently appealed for information from 13 students, who they believe may be able to help with the investigation of the rape of an 18-year-old woman that took place at the beginning of December.

It was reported that the woman was attacked during the hours of 23:30 and 23:50 GMT on 2nd December, near the skate park in Riverside Park. CCTV footage was released soon after of a man following the woman from Wessex Lane halls.

The images that Hampshire Constabulary have recently released were taken at U1 bus stops outside Wessex Lane's Montefiore Halls, and it is believed that all pictured are University of Southampton students. Police are also interested in speaking to a woman pictured outside Burgess Road Sainsbury's.

We’re releasing 13 images of key witnesses we want to trace as part of our investigation into the #Rape of an 18-year-old woman in Riverside Park #Southampton on Dec 2. Read our appeal here: https://t.co/ouHZXVY78I and if you know who they are please call 101 quoting Op Scorch pic.twitter.com/NjTAYuke6f

Det Insp Roger Wood, of Hampshire Constabulary, explained: "These people are seen to get off the bus at the time we believe the suspect is in the area and for that reason we need to speak to them.

"The woman in image 13 is captured outside Sainsbury's on Burgess Road prior to the offence.

"We are working with the university to identify these people. They may have seen something significant to the investigation so it is imperative we trace them.

"If you know any of the people pictured or you recognise yourself here, please call 101 and quote Operation Scorch."