Over 400 hundred people, including some Southampton students, will be taking part in the strike in order to bring attention to the need for proportional representation in our current voting system. The Make Votes Matter movement have highlighted that 68% of votes had no impact on the make up of Parliament in the 2017 Election, which is not dissimilar to before this date 100 years ago when 70% of people were not allowed to vote. Influential people taking part include Stephen Kinnock MP (Labour), Sal Brinton (President, Liberal Democrats), and Amelia Womack (Deputy Leader, Green Party). 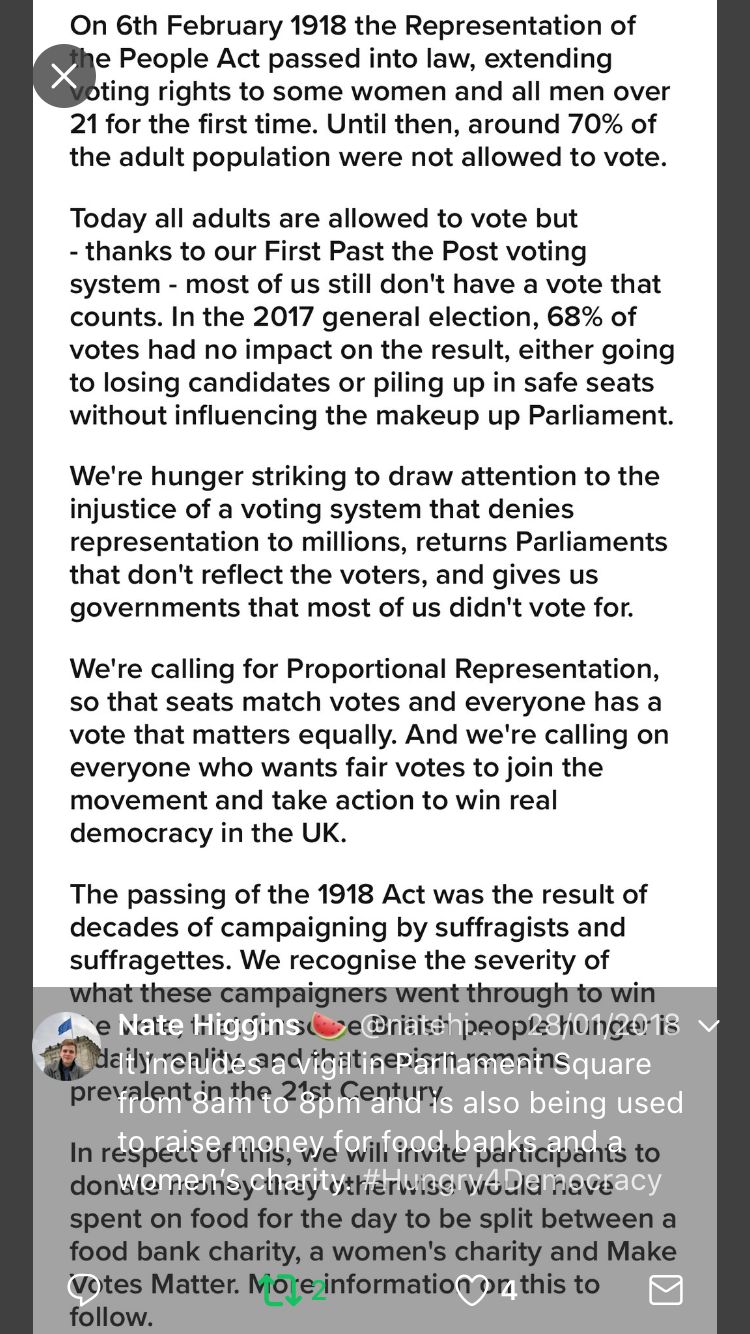 When asked why she was taking part today, one student, Charley Sealy, stated that 'I remember in the 2015 election, the Green party, who I support, achieved over 1.1 million votes and yet only one seat. Before this, I did not fully understand the current first-past-the-post system, and so this result shocked me. I simply could not think of anything less democratic. Since then I have been a keen advocate of proportional representation. Also, as a feminist, I want to recognise and do something in solidarity with the suffragettes who also fought for a fairer voting system 100 years ago.'

If you would like to find out more information or to take part yourself, please follow one of the links bellow. Understandably, if you do not fancy giving up food for the day, simply signing up to the movement and spreading awareness through the #Hungry4Democracy hashtag will make a huge difference, or perhaps attempting a 12-hour hunger strike or giving up one meal for the day in support of the cause. You can also donate to the following three worthwhile charities (all proceeds are spread out equally between them) that the movement is raising money for, as many people taking part today will be donating money that they otherwise would have spent on food:

• Trussell Trust – A charity aiming to put an end to UK poverty and hunger through a network of food banks.

• Make Votes Matter – The campaign to introduce Proportional Representation to the House of Commons
.

To join in with the movement: https://www.makevotesmatter.org.uk/join-mailing-list/

To donate to the above charities: https://donorbox.org/hungry-for-democracy

A Soton grad is being quarantined in Tenerife over coronavirus fears