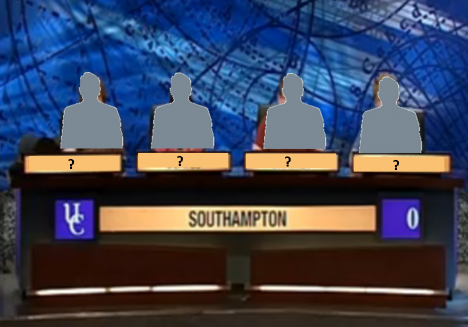 Your starter for ten.

Have you ever sat at home screaming at the TV as the muppet in front of you crumbles and tells Jeremy Paxman that there are 11 months in a year?

Well fear no more, as University Challenge try-outs will be taking place at the University of Southampton from tomorrow. This is after the university successfully became one of 28 teams out of 130 applicants to be chosen for this series.

Captain of the 2015 team Tricia Goggin says “I encourage students from all subjects and levels to try-out. A good team needs a balance of academic disciplines as well as some esoteric knowledge from all members.”

In fact, it was the 2015 team that achieved University Challenge notoriety after becoming one of the show’s ‘highest scoring losers’, accumulating a respectable 135 points against Cambridge’s St. Catharine’s College in the first round of the competition. The 2014 team even managed to get through to the quarter finals, so there are high hopes for this years team to get to even greater heights.

The selection process will consist of two rounds; one a written test to check basic knowledge and the second a quick-fire round to ensure that you are capable of performing under pressure at high intensity.

The test dates for the first round are: