Unite Union has called upon the University of Sheffield to implement a full salary to over 700 staff members at Students’ Union and Unicus (a standalone company owned by the University).

Currently furloughed at 80 per cent pay, the Union accused Vice-Chancellor Koen Lamberts of “turning his back” on the staff by leaving them to survive on what works out at just £6.16 per hour.

His refusal to meet with the Union comes after over 1,000 signed an open letter demanding for their conditions to be met. 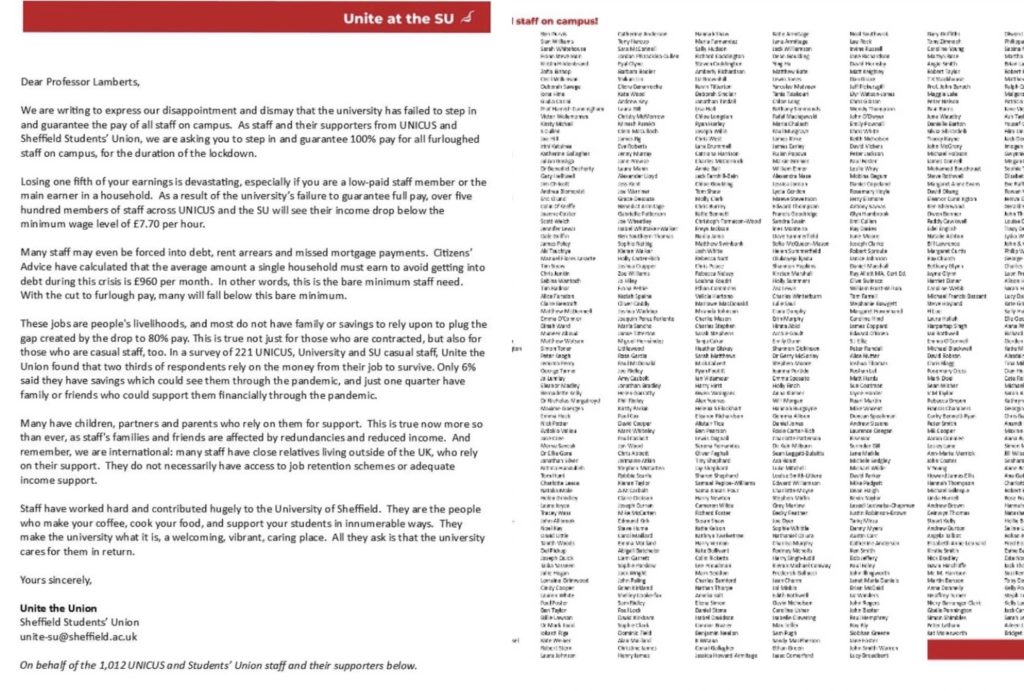 Harriet Eisner, Unite regional officer, said: “Koen Lamberts has turned his back on the community that makes up the University of Sheffield.

“This is an ill-judged decision which is going to affect the reputation of the university. We urge him to think again and engage with the union which has the workers’ best interests at heart during the current health crisis.

“The Vice-Chancellor is in charge of the University, and employees of Unicus and the Students’ Union are part of his university community.

“I find it incredible that the Vice-Chancellor appears to be washing his hands of these young people who have paid fees to study at his university and work at his university in order to pay for their food and accommodation.”

Just 15 per cent have families who can support them financially, and only 9% have savings that will cover the lost pay.

“We are modelling some difficult financial scenarios based on how the pandemic may affect our next academic year.

“Although the university has committed to topping up the salary of any of its furloughed staff, the Sheffield Students’ Union and Unicus are separate employers with different financial and governance structures to the university.

“Both organisations are reliant on revenues from food and drink outlets to cover their staff costs.

“Like other retail and hospitality outlets, they have taken the decision to access the Government’s Coronavirus Job Retention Scheme scheme to support their staff and protect jobs while their buildings and facilities remain closed and revenues from those activities have dried up.

“We are working together to mitigate longer-term financial risks and to ensure a safe return to work as we look at how we will reopen our campus. Leaders at both the Students’ Union and Unicus are working hard to make sure staff do not face financial hardship.

“Details of the Students’ Union financial support scheme can be found here: https://su.sheffield.ac.uk/covid-money-issues/su-financial-support-scheme. Unicus has also written to its furloughed staff with details of their hardship fund and invited applications to it.”