Sheffield Labour have cancelled an event Chris Williamson MP was due to speak at, with two committee members also resigning from their roles today.

The cancellation of Williamson's visit comes after it was announced police would be investigating allegations of anti-Semitism within the Labour Party.

Sheffield Labour Students (SLS) said although Williamson was not personally implicated in this investigation, the event was being postponed due to the "current climate within the wider movement".

They do plan, however, to take another vote after the investigation has been concluded on whether the event should take place. 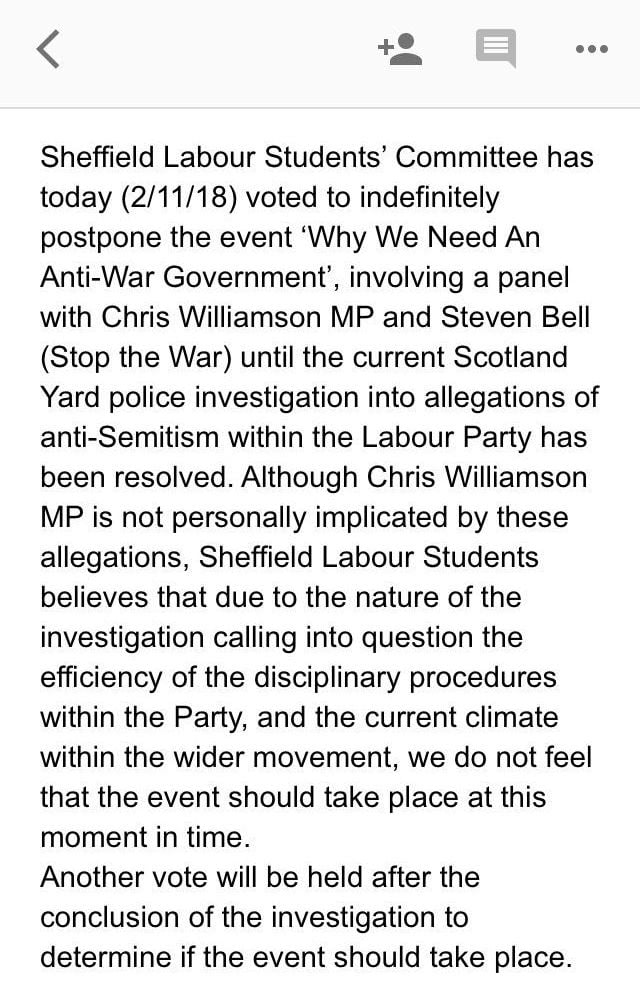 The Sheffield Tab revealed yesterday the society had voted to invite Williamson, the Labour MP for Derby North, to campus. Sheffield Jewish Society had asked SLS to withdraw Williamson's invitation, saying it was a "betrayal" of Jewish students at Sheffield.

The controversy surrounding Williamson includes describing the row over antisemitism in the Labour Partyas "proxy wars and bullshit".

This was the third vote the SLS committee held on whether to go ahead with the event. One committee member had previously described Williamson as "part of our movement", and another said "it will be a very good event".

Hi James –
Thanks for your tweet. The Committee is holding another vote in light of the police investigation. We will announce the outcome in a public statement as soon as every member has voted.
– Katey
Co-chair

There had been a significant backlash in response to the announcement of the planned event with Williamson, which is a recreation of a Stop The War event that took place at Labour's national conference, focusing on Yemen.

Sheffield Jewish Society said: "We as a committee believe that Chris Williamson’s actions have encouraged a culture of anti-Semitism. As such, any society inviting him onto campus, for any reason, is a betrayal of Jewish students in Sheffield and the Jewish community as a whole."

The invitation faced heavy criticism online, including from students involved in Labour politics, described Sheffield Labour Students' original decision to host the MP as "outrageous" and "a disgrace".

It is a disgrace that @ShefLabStudents chose to to give him a platform and their statement (and minuted conversation) is inadequate to say the leasthttps://t.co/vmqZYu4Fvi 2/

It is frankly outrageous that @ShefLabStudents have invited Chris Williamson. It flies in the face of the hard work that previous committees have done to work with @JewishLabour and @UJS_UK to create safe environments for Jewish members and a close relationship with the J-Soc https://t.co/OAQOImTk4M

Sheffield Labour Students have also said they will hold an Extraordinary General Meeting to fill the vacant committee roles after reading week.

Police are appealing for information following the incident

The SU has come under fire

And yes, more than one wants to collab with Ollie Ball

‘This victory shouldn’t have taken this long’

John’s van will deffo get scranned

In videos: Hundreds gather in Sheffield to stage sit down #KilltheBill protest

Roads were blocked off outside the police station

Who else is buzzing?

Rent strikes, illegal raves and a Sims IC: Looking back at a year of Covid-19 in Sheff

The last 12 months through the eyes of Sheffield students

It’s entirely volunteer-run and has no permanent income

How has coronavirus changed student life in Sheffield?

Just give us a blue pint to see us through

Which Sheffield night out are you based on your Zodiac sign?

This is the most important Sheffield SU election in a long time, says candidate

‘Issues are starting to come to a head’

“All we want is to be safe”

Are you really a Sheffield student if you don’t recognise this Sheff A-Z?

Fail and your student card will be revoked IMMEDIATELY

‘It is unnerving and unfair’: I was bet on by multiple men on holiday

Seriously, am I a horse?

Men in Sheffield, it’s time to speak out about sexual harassment

I am a man, and I am sick of male predatory behaviour towards women

Bridgerton has just been renewed for a season three AND four!!

My life just got so much better

There are only four iconic teen girl movies, but which one is actually the best?

True crime documentary ‘Why Did You Kill Me?’ is being released on Netflix tomorrow

This is what it was actually like to go on CBBC’s Trapped, by someone who was on it

Okay but all I wanna know is, do you actually get trapped?

Ollie Ball has a merch line

Quiz: The Devil Wears Prada quotes are iconic, but how well do you know them?

Can you please spell Gabbana?

This Is a Robbery on Netflix: Where is convicted art thief Myles Connor Jr now?

He admits to being part of over 30 art heists, but says he had nothing to do with this one

More fun than it should be

Made in Chelsea marriages: All the cast member weddings since the show started

No, they actually don’t all just argue, cheat and breakup

Prince Harry pays tribute to Prince Philip, calling him the ‘legend of banter’

He released a statement today

You loved Bebo but had no clue what MySpace was

Universities won’t be returning until at least 17th May, ministers have said

Buzzing to come back for exam period x

Nothing about the last year’s been normal, we all need to cut ourselves some slack

My money’s on Tommy Hunter

But even staff admit they’re finding it hard to use

Mother of God! These 30 Line of Duty memes are even more wild than last night’s episode

Is anyone else still recovering?

The show is looking for contestants on Tinder