Minus the death and destruction, of course

I moved to Sheffield three and half years ago and let me tell you, I quite like it.

Sheffield is the perfect student city – it's not too big, it's not too small. Coming from a small town to university, the city was accessible for someone who had never seen a tram before.

On the doorstep of the city is the Peak District, and it's only an hour or two from Manchester, Leeds, Liverpool, and Newcastle, and less than four hours from London. It's accessible, it's friendly, it's fun for students. However, there's something missing.

The city has a rich music heritage, with Arctic Monkeys, Pulp, and The Human League amongst others all hailing from the city. But then compared to Manchester and Liverpool, this seems like a small minority.

On film, Sheffield isn't exactly Paris. No one was watching The Full Monty and admiring the scenery, and Threads was never going to pull in tourists with its depiction of a post-nuclear apocalypse in the city. Four Lions, set in Sheffield, skirted around the fringes of the city, but when it came to showing the city centre on film, it was passed off as London. There was a decent aerial shot of Meadowhall, however, and any film able to make Meadowhall look like a nice place to go is obviously something special.

It's almost like the city is dormant. It exists, but that's it. It has so much to offer, so much potential, yet it seems unfulfilled. It seems like our only claim to fame is the fact that we have two Wetherspoon's across the road from each other, and that during the World Cup some guys in Walkabout threw some pints in the air higher than most other cities.

So with the new series of Doctor Who starting last month, Sheffield may well get the boost it needs to make its name in the world.

In Doctor Who, the city is finally been shown in all its beauty. In episode one, 'The Woman Who Fell to Earth', we're treated to some views from Hunter's Bar, panoramic shots of the city are aplenty, the bus station (that's right) even pops up. Come episode four, 'Arachnids in the UK', mutant spiders are offset by the regenerated Park Hill flats, the trams make an appearance, and 'the uni' even gets a mention, although there's no mention of whether it's Uni of or Hallam.

Little Easter eggs, like the green police box on Surrey Street, are fun little nods to Sheffield that will please residents and get people interested in what Sheffield has to offer. It's unclear how much more of the new series will be set in Sheffield, but references to the city will no doubt implant it's name and culture onto viewers pretty quickly.

On top of Doctor Who, Sheffield has found another champion in Rahul Mandal, the 2018 winner of The Great British Bake Off, who works at the University of Sheffield and is the nicest man to ever walk this Earth and anyone who says he did not deserve to win is soulless. Viper Rooms DJ Luke also made an appearance on the competition, with someone actually making the creative decision to film the outside of Viper Rooms. Insane stuff.

Earlier this year Sheffield lost out on the chance to become the home of Channel 4's new HQ, the privilege eventually going to Leeds. It's disappointing, given that Sheffield really hates Leeds after all, but it's a sign of a change in how Sheffield is being perceived by the outside world. 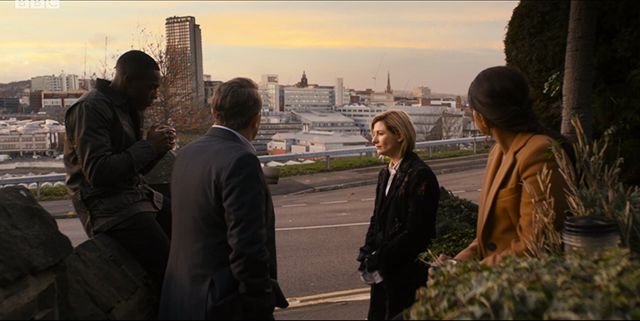 With two brilliant universities, the city is the centre for so many students, and redevelopment projects are underway to improve the shopping districts, although it will have to go a long way to draw in shoppers from Meadowhall. Plus, there's so many microbreweries in Sheffield, I'm actually sick of microbreweries because of it, but I guess it's exciting for everyone else.

Even so, Sheffield is a city on the up, and it's exciting to be part of it. Minus the death and destruction, of course.