Plug is apparently not closing down, with owners claiming their Twitter was hacked

Plug Sheffield have denied the club will be closing down, in an extraordinary turn of events from earlier this week when the club's Twitter account appeared to claim the club would be sold and shut down.

Owners, MJR Group, told The Tab: "The Plug has not been sold and is operating as normal."

They claim a former employee hacked into their Twitter account and gave false responses to inquiries about the future of the venue.

An internal investigation into the supposed hack is being conducted.

Earlier this week, their Twitter account appeared to confirm reports that the club had been sold and would be turned into a golf shop.

A message from the Plug Sheffield Twitter account had said that they were "sad to confirm" the apparent closure of the club, which was initially reported by VIBE. 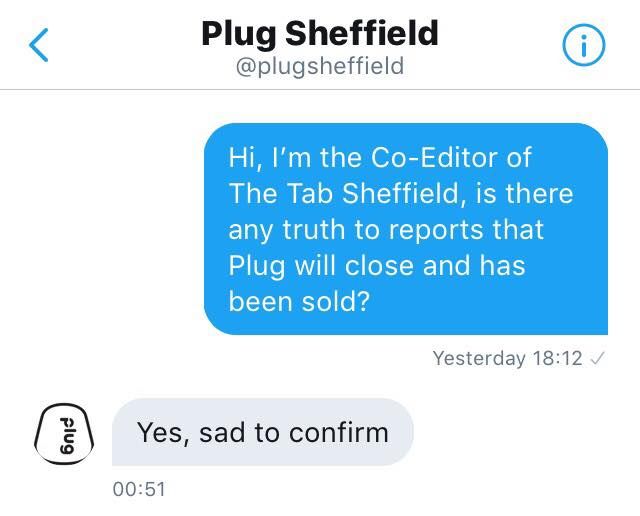 A spokesperson for MJR Group has now said in a statement:

"The Plug has not been sold and is operating as normal.

"Concerts, club nights and other events have been booked in for later this year.

"We are currently investigating why this rumour is circulating.

Especially popular with freshers, the club night and live music venue has seen appearances from acts including Arctic Monkeys, deadmau5, and The Wombats over the years.

The 1,200-capacity nightclub has been open since 2005, and under the control of the promoters and venue operators MJR Group since 2013.