A Sheffield Hallam student was refused entry to Yates in York on Saturday (2 December) because the bouncer and manager allegedly mistook his cerebral palsy for being "drunk".

When trying to enter the bar, student athlete Reece was stopped by the bouncer and manager because they mistook his cerebral palsy for being drunk. After explaining his disability, they allegedly told him he was "wrong" and refused to believe him.

He was allegedly told "you should have a medical card or letter to prove it".

Yet another act of ignorance and discrimination at @YorkYates . Security refusing entry due to having cerebral palsy as I sounded too drunk due to my speech impediment and my lack of balance #isthisfair?

After contacting Yates about the issue, he was left without a reply for days. Without a response, he posted on Facebook to explain the incident. 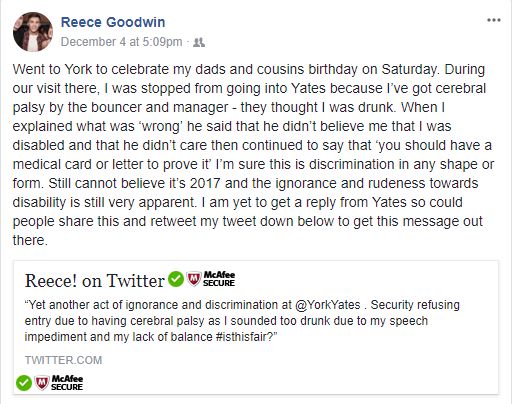 On Tuesday (5 December) Reece received a response from Yates York. They told him "We can confirm that we did challenge you on entry into our establishment on the conditions of the door staff believing you were under the influence of alcohol.

"However much later it was then explained to us that you had cerebral palsy, however by this point the refusal was not to do with yourself but two womens' behaviour in your party.

"If you are wanting to contact us directly to speak about the matter, then please call the site, where the manager present at the time can speak to you with his unbiased opinion on the event and the door staff present."

A spokesperson for Yates told The Tab: "Whilst there was initial confusion regarding the gentleman's condition, the entry refusal was made due to the behaviour of other party members.

"We have already apologised directly for the original misjudgement and will conduct refresher training with staff following this incident."