He has said he ‘didn’t mean to offend anyone’

Two Computer Science students at The University of Sheffield have posted racist memes and images on their course group chat.

One meme compares "The Rise of the Planet of the Apes" to Black Lives Matter and another image has illustrations of "Snigger the Monkey".

When asked why they had posted the images in the chat, the students said they were drunk at the time of posting. One of them is now meeting with his Head of Department today about the meme.

Screenshots of a course group chat for Computer Science were posted on Twitter by a Sheffield student.

The first meme, sent by Hugo Casañas Salgado, reads: "Can I copy your homework? Yea, but change it a bit so it doesn't look obvious" with a photo of the movie poster for "The Rise of the Planet of the Apes" and an image for the Black Lives Matter movement directly below. Hugo has said he regrets sending the meme. 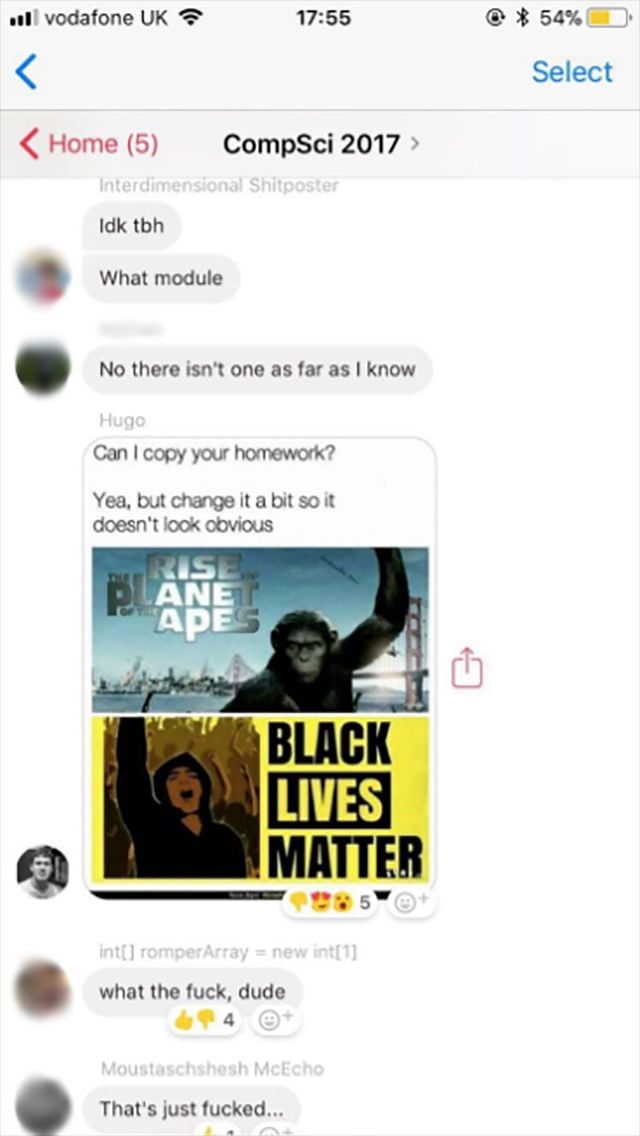 The second image, posted afterwards by a separate student, Dominic Lounes, is an illustration of a monkey from a children's book, reading "This is Snigger the Monkey. He loves eating tasty bananas." Dominic claims that he thought posting this would "defuse the situation". 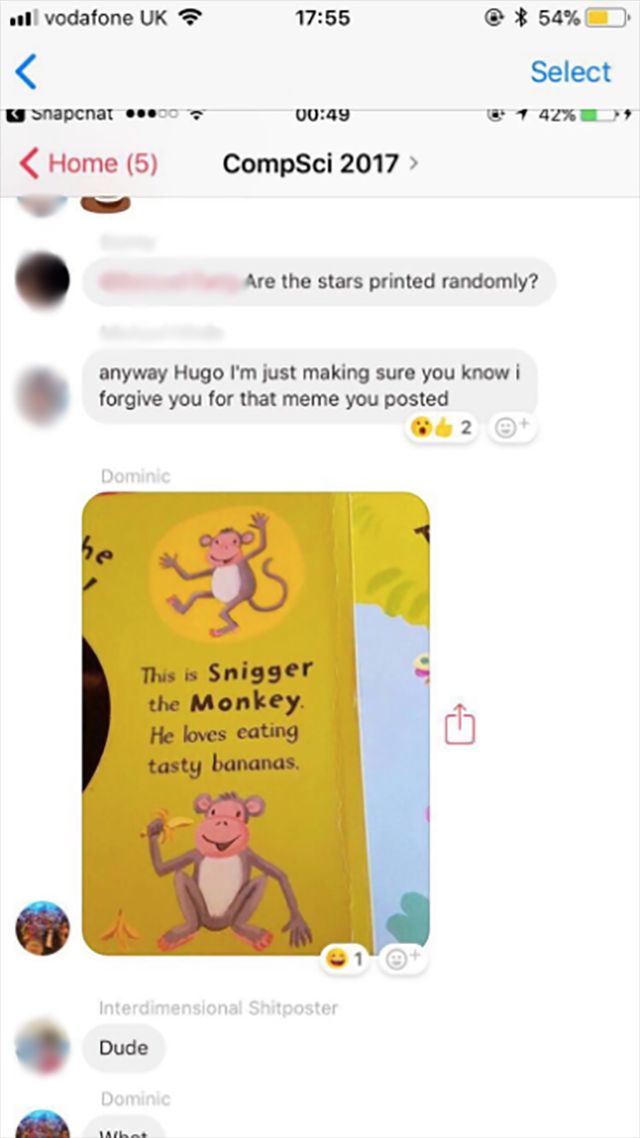 Members of the group chat responded to the first meme with "what the fuck, dude" and "That's just fucked…" while again replying "Dude" to the second image.

One individual replied: "anyway Hugo I'm just making sure you know I forgive you for that meme you posted".

Hugo, who posted The Planet of The Apes meme, told The Tab: "I was drunk and did NOT mean to send it to that group, and CERTAINLY did not mean to offend anyone.

"I have a meeting today with my head of department. I must admit I quite regret sending it."

When asked whether it is normal for racist memes to be posted in that chat, Hugo responded: "From time to time people do. But I doubt very much that people do it to offend."

Dominic, the student who posted the second image told The Tab: "That was taken out of proportion and I did not have any bad intentions when I sent it.

"I had alcohol and I wasn't in the best judgement, somebody else sent something much more offensive comparing Black Lives Matter to Planet of the Apes, and in my lack of judgement I sent that picture thinking it would defuse the situation.

"I now deeply regret it and am extremely sorry, I have apologized to the chat and if I could go back I would have never done that."

Both Hugo and Dominic mentioned that they have since received multiple messages online confronting them about the messages.

Louis, the social media executive for Sheffield CompSoc, speaking on behalf of the society, said this was the first instance of racism he'd heard of from the department. He said that group chats are not moderated by the society, and seemingly the comments weren't made on an official course chat. He emphasised that the students involved should be disciplined, but that no rash decisions should be made.

Chidinma Chukwuma, a student at the university who was vocal about the incident on Twitter, said "I was just outraged at how brazen it was. This is my first time seeing it [racism] from university students at Sheffield Uni. I personally don't want to demonise those involved, I just think people needed to be more sensitive when it comes to issues of race."

Sheffield University's BME committee told The Tab: "We’ve made a formal complaint about this and are speaking to the SU officer team. We're waiting for the University's response to this complaint."