Last week it was reported that George Okoro, a Royal Holloway student struggling with his finances, had £20,000 worth of tuition fees paid for him by his best friend’s dad. The Royal Holloway Tab were able to sit down with George for to talk about his experience.

George told The Royal Holloway Tab he tried to negotiate with the university after several warnings that he would be kicked out if the tuition fees were not paid. He offered to pay the amount that was owed in several sums, as he and his mum were working multiple jobs at the time. Eventually the university stopped George’s access to resources such as Moodle.

George’s friend, Kris, called his family and told them about George’s situation. Kris’s father spoke to George over the phone, saying that he would do what he could to help him. George was at work when he heard the news that Kris’s father had paid nearly £20,000 towards George’s tuition fee, wiping the debt.

When you first saw that your story was printed in the Daily Mail and that people were talking about it, what was like for you?

It was weird, I guess. When the reporter reached out to me, I thought it would a small, local news, I’d be lucky to see my name in the newspaper for a clip-in or something, and that would be it. I didn’t expect it at all.

I was open to talking about my situation because I wanted to resonate with other people that were in the same situation as I was, and I’m sure they are. People just assume that anyone who is an international student is going to be able to fully pay their fees.

It seems like there have been other people in a similar situation. Would you say that there was something of a community feel?

Yeah, exactly. I feel like a lot of people don’t understand how it works. I saw a lot of comments on the Daily Mail article like "Why did you go to university when you can’t afford it?" or "How come the uni let you stay for that long?"

The UK and the EU don’t really provide a finance system for those people who aren’t in their countries, which is understandable. You don’t hold a grudge, but can’t help but feel a little bit like: "Ah come on, I’m a student, I’ve got all the grades and criteria, help me out".

Tell me a little about your decision to study at university, and the financial trouble that you’ve faced since your studies began

My mum didn’t go to uni, but she always wanted to. She’s really pushed me and my sister towards higher education. We were trying to work out if we could afford it, took on two jobs and rented out one of our rooms just to make sure. You have to start cutting back on things that you wouldn’t even think about cutting back on.

I tried to alleviate some of that stress and financial issues as much as I could and I remember the look on her face when I told her that I was an international excellence scholar. I got really good grades, the highest UCAS grades that you could get to come to university. It was just work and work and work; family, work and school. I hardly have time for anything else, my friends barely see me.

Royal Holloway offered me £10,000 as a scholarship. They take off £4000 from your tuition fees, and £3000 in your second and third years, which helped. I still had to pay £16,000 for tuition fees, so even if you take off that amount it’s still way more than UK students will pay.

I was already working more than I was studying, and I could start to see it affecting my grades. I was like, if I take any more, then I might as well just quit.

They cut my access to Moodle in second year. I would try to go and talk to teachers and find out the topic. They’d done that before once or twice, and I sort of had to find some money to pay. My friends didn’t know how difficult it was. When I left the house… I don’t want to be that guy when everyone is having fun, and for people to know about my situation.

So eventually you set up a GoFundMe page in order to try and raise some money to help with your cause. Whose idea was that?

Two days prior to setting up the GoFundMe page I was having a discussion with my girlfriend in the evening. I was only joking at the time – I said: "What if I do it?" 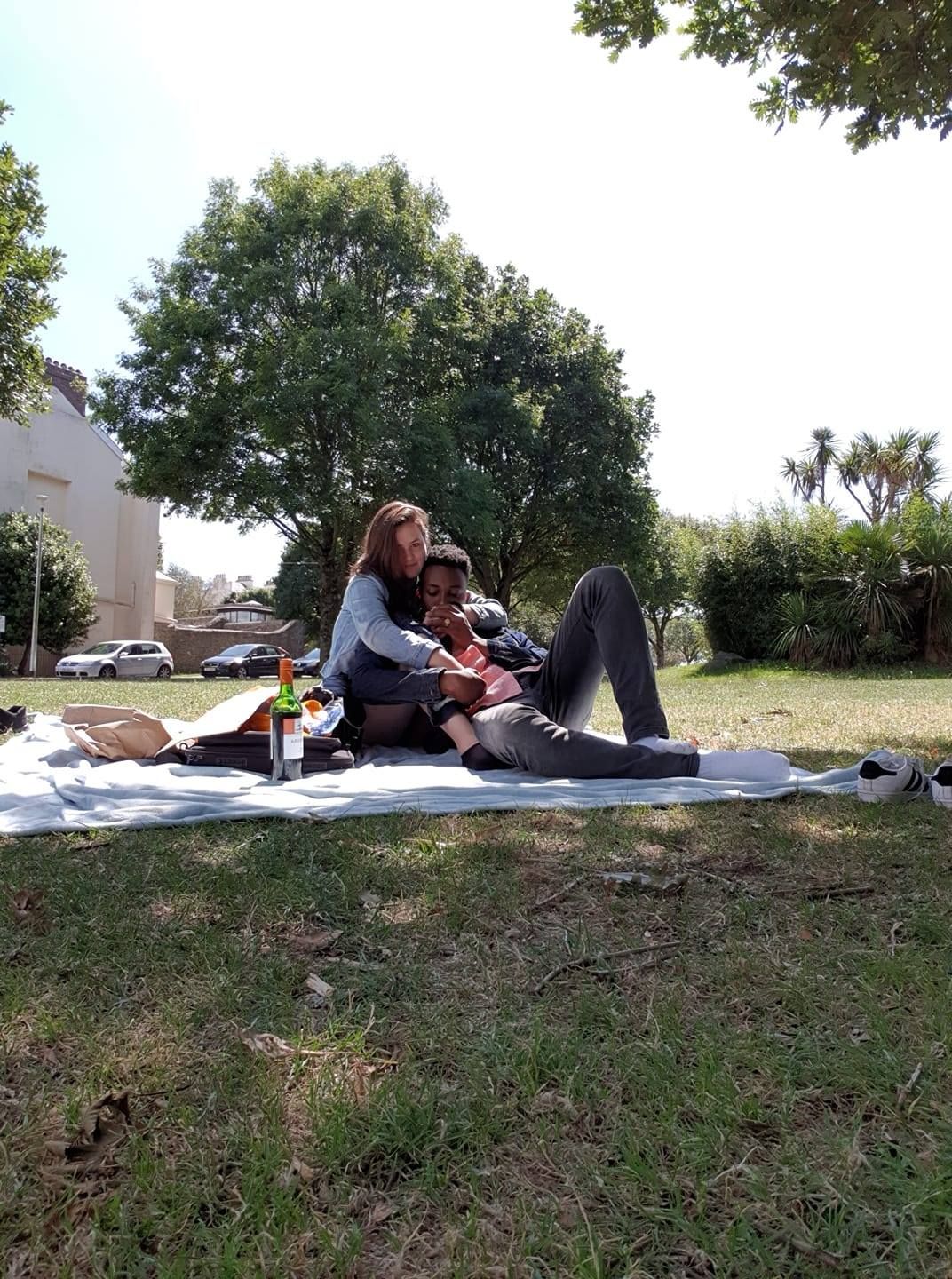 George with his girlfriend

I really just expected money from my mum, my dad, and my sister really, and no one else. Trying to imagine people who’d go out of there to give me money having read my story was kind of ludicrous.

I thought if I get £100 in a week, I’d be lucky. My girlfriend was on the page all night, constantly refreshing. After every five or ten minutes, people would donate, £5, £10, £20. Before I went to sleep it was £145, and when I woke up the next day it would double that, two hundred and something.

By the end of the second day it was almost £600. Someone donated £100 while we were sleeping. People kept donating. After around two and a half days, it was almost £800. There might actually be a chance here. People kept sharing, we had 140 shares on the post on Facebook. 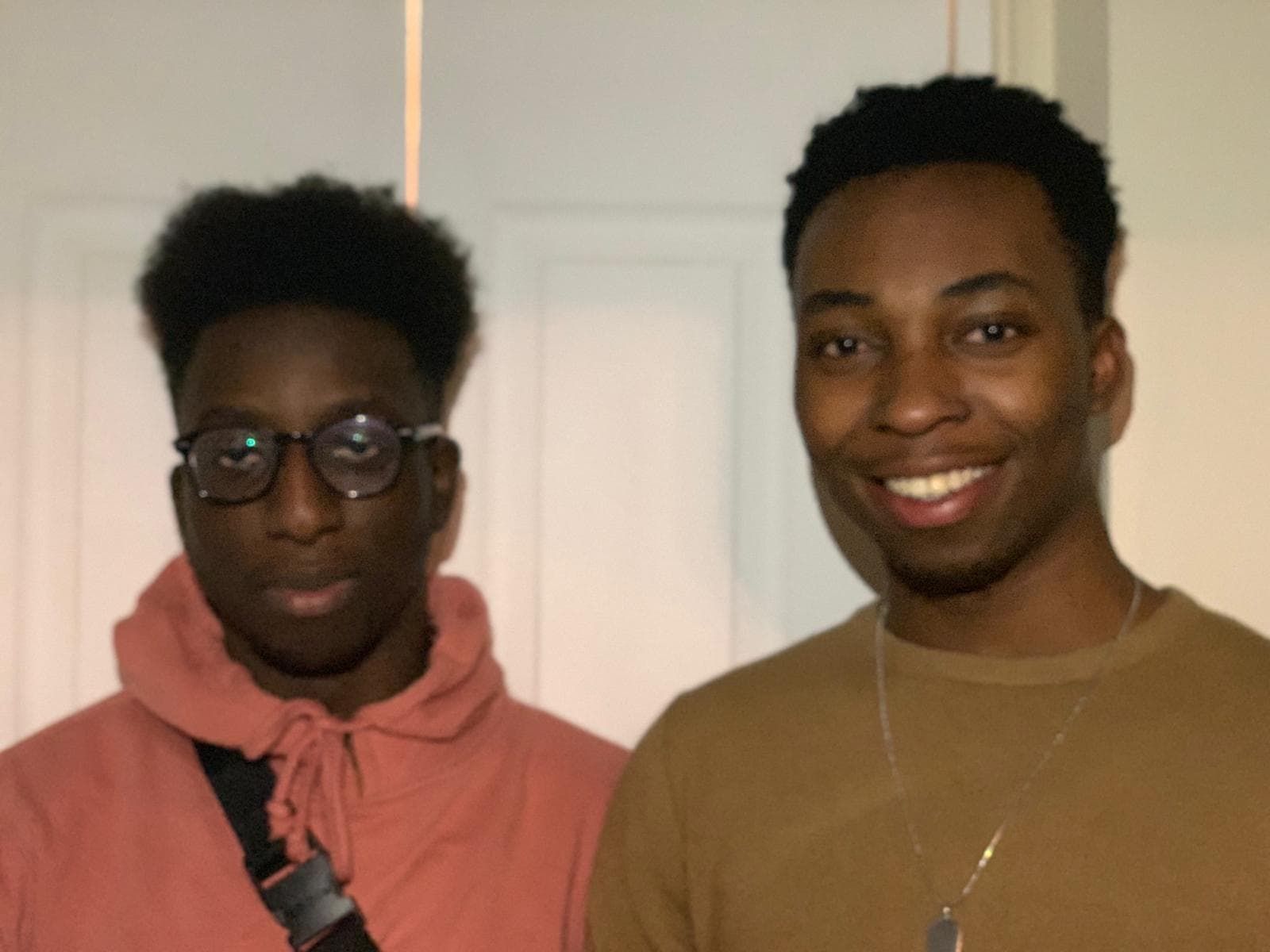 George Okoro and his friend Kris

I quickly looked at my phone and Kris’s dad said that he would like to cover the entire balance. I nearly shat myself. My knees buckled and I had to lean on the till. I legit could not stand properly.

Then I received a message from the school saying: "The amount of £19,860 has been paid". It was fully paid. At that point I was trying not to scream at the top of my lungs at work. I was in disbelief, in shock and awe. My eyes were mad watery.

The first thing that came to my mind was go downstairs, tell my manager that I can’t finish this shift, and just leave. And then my next thought was like, you still have financial issues to deal with, don’t be stupid, finish your shift.

What did you decide to do with the funds that were raised through your GoFundMe page?

I released a statement that said I was going to help any students with the money that was raised, I wasn’t just going to start going out to dinner and shopping. It was almost £820 at this point.

One of my other friends from the University of Swansea messaged me saying that she had a friend who had to pay £5000, and needed any support that he could get right now. I said I’ll send everything. They said: "Are you serious?" After having someone I'd never met donate £20,000 to my cause, £800 felt like nothing.

The money came in, and me and my friend had a discussion over two days about emails from the school, the same thing my girlfriend asked me to do for the GoFundMe page.

Have you had an opportunity to meet Kris’s father since he donated to help pay?

Yeah. It was the first of February, five days ago. After Kris’s dad sent the money, Kris was really like my brother now, he was real family.

My mum is very big on respect, so thanked him a million times. He was just laughing and kept it really chilled. We talked about the way the whole thing happened. He jokingly referred to me as the fourth son, and said that if I want anything in the future that he was always there.

George has an idea for a program, encouraged by Mr Tagoe, which would support international students struggling with their fees, with help from banks and businesses. George hopes that his younger sister is able to follow in his footsteps and graduate at the end of her time at university.

He has already spent time on campus, had lunch with students and given a talk

He’s the heir to a Cornish estate