KCL get refunded for lost hours, why don’t we?

As students have faced disruption due to the ongoing lecturer strikes over unfair pension, many have began to question where that £9250 is going when they aren't getting their value for money, which is a fair point.

At KCL, students are getting compensated for this disruption, with the money being taken from the salaries of lecturer's who are striking and therefore not being paid during the strikes. Makes sense, right? Especially as vital class time is missed around such an important time surrounded by deadlines and quickly approaching exam season. And often when you pay such a large amount of money you expect to get what you pay for. And if not, you usually get your money back. Sadly, not every University is following in KCL's footsteps: one being Royal Holloway.

Many students decided to take it upon themselves to question whether or not we get refunded for this disruption to our degree. And in an email to all students, the Senior Vice Principal at Royal Holloway said "I know that a number of you have enquired about compensation and it's not something we are considering at this time." 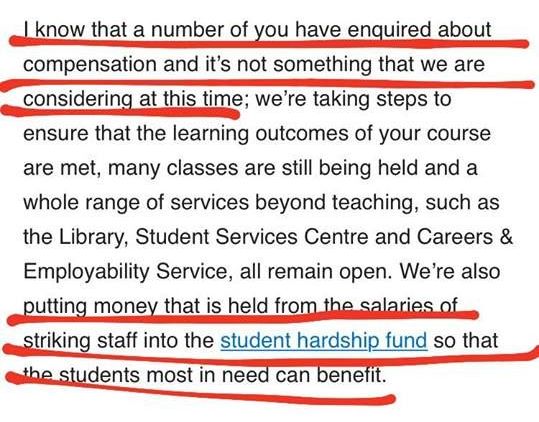 Instead of being refunded and slightly lessening our impending debt, Royal Holloway have chosen to "put money that is held from the salaries of striking staff into the student hardship fund so that students most in need can benefit." So in response to this, I decided to ask RHUL students their opinion. 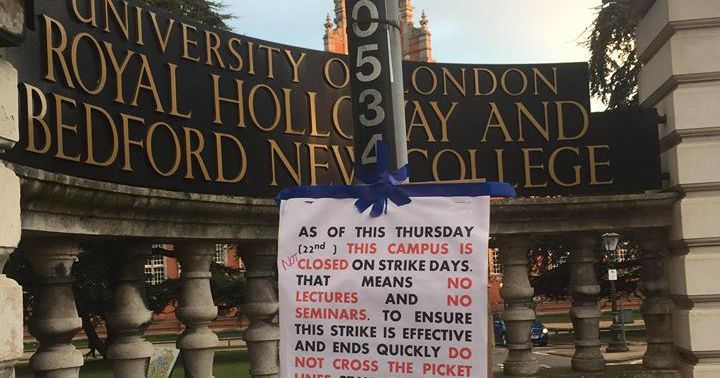 "I'm angry about the lack of compensation," one student who prefers to remain anonymous says. "Especially since they're putting the money into a fund that 90% of students won't even benefit from. I am paying for an education that has been put on hold and I expect to have this reflected in the amount that I pay."

Another student argues: "they've already added an extra £250 this year which has had absolutely no added value – why are they trying to rob us further?"

So understandably, students are pissed. No classes, no tutors to contact because they're striking, confusion with deadlines and constant changes, all while paying £9,250 a year. Great.