My nipples are on show, so what?

Eight groups on Tinder Social messaged me about them this weekend

Something very major was called to my attention this week by several groups of gentlemen on Tinder Social. They informed me, after matching with my group and seeing my photos, that I, in fact, have my nipples on show, which then proceeded to be the subject of quite a bit of ‘banter’.

Is it just me, or is this joke a bit old now? It feels a bit classroom-esque, it’s the next level of “lol your bra strap is showing.” I chose to wear that top and to not wear a bra, so I don’t need this to be pointed out to me through cheap puns in a group chat. I mean, I have had said nipples for these past 21 years and get to see them every day, so you’ll excuse me if I don’t find them as fascinating as you do. 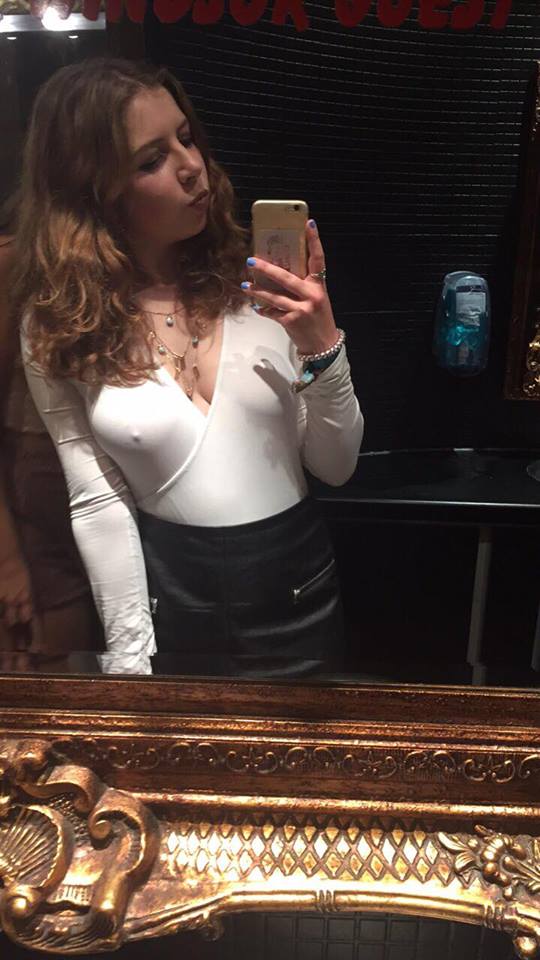 For those of you who are not yet in the know Tinder Social is a new group dating platform, where friends form a group who can then match with other groups in the area, and everyone can then arrange to meet up for drinks. It’s on this side to the dating app that boys can get a little cocky, and try to engage girls in what they deem to be friendly banter. Except with comments like the following, it’s not friendly, it’s degrading.

What’s actually funny about all of this though is that these jokers know me and my fellow nipple bearers are reading their hilariously unoriginal messages, and yet still think we would be interested in meeting up with them for drinks. Funnily enough, lads, this hasn’t charmed us and we’ll just find another group of people to con into buying us drinks all night. They’ve cockblocked themselves and lost any chance they might have once had of meeting this famous pair of nips, or any of the other nips in the group chat. 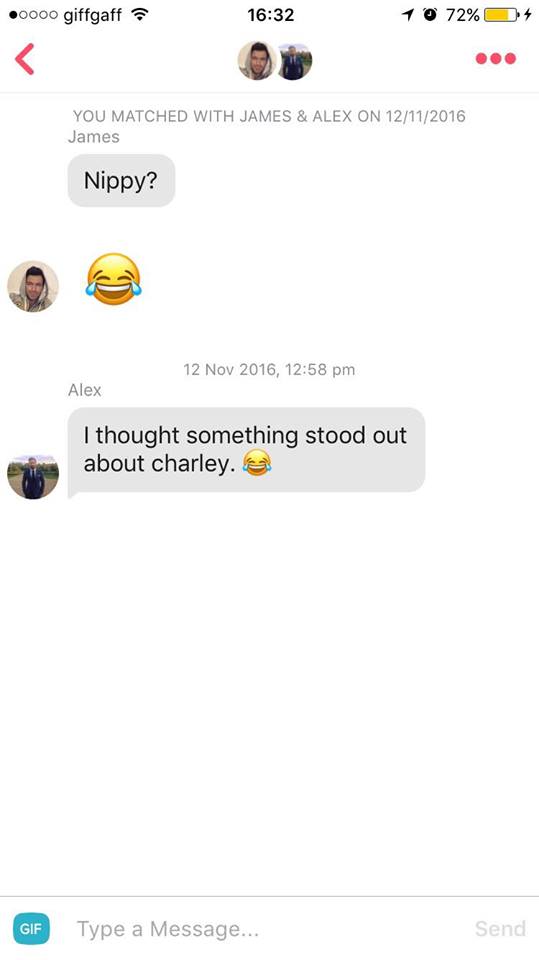 These puns are hysterical, I’ve never been more attracted to anyone

You’re right, they are on show. So what? Is it any of your business? What does pointing this out actually achieve, apart from wasting my time?

I’ve only experienced this level of degrading behaviour on Tinder Social, the new playground for guys to bully and objectify young women under the umbrella of ‘banter’, because they feel like it’s okay to do it when they’re in a group. They think they can get away with it because it’s “just a joke”. In fact, most of the time they’re not actually saying anything about my breasts, more just making elusive puns and then pretending they don’t know what I’m talking about when I confront them. 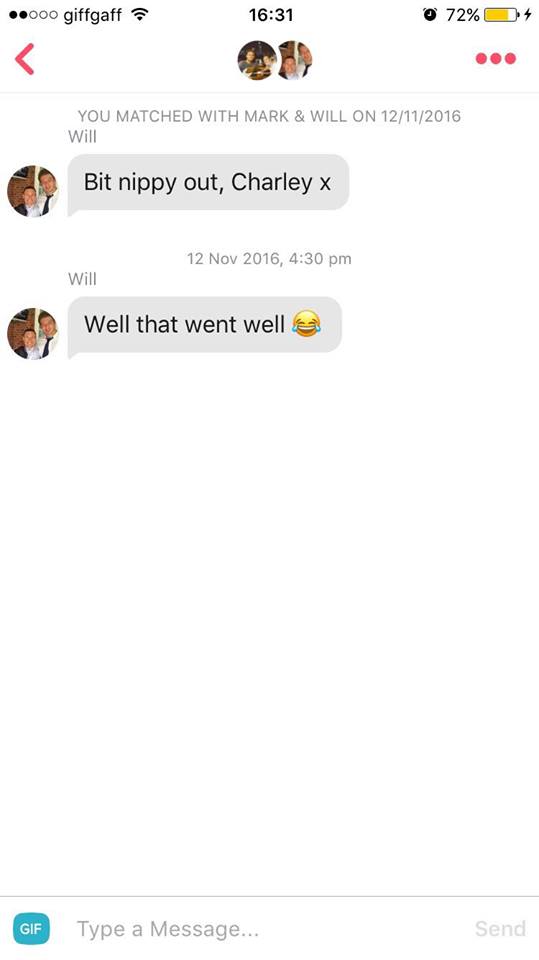 it’s worrying that he thought this would interest me

To these guys, as long as their mates find it funny then it’s okay to say. It doesn’t matter how it makes us feel. They’re too afraid to say things like this in person because they know it’s offensive, so they hide behind their phones chugging Red Stripe and listening to crappy soundcloud remixes in someone’s front room, aimlessly intimidating young women. That’s how they made me feel, scared and intimidated.

I think I speak on behalf of a lot of young women when I say that we’ve been putting up with this behaviour for too long, and it needs to stop. We’re not ‘asking’ to be bullied and objectified by putting up pictures like this, what we’re asking for is respect and maturity. When you get to your 20s it shouldn’t be an outrageous ask. 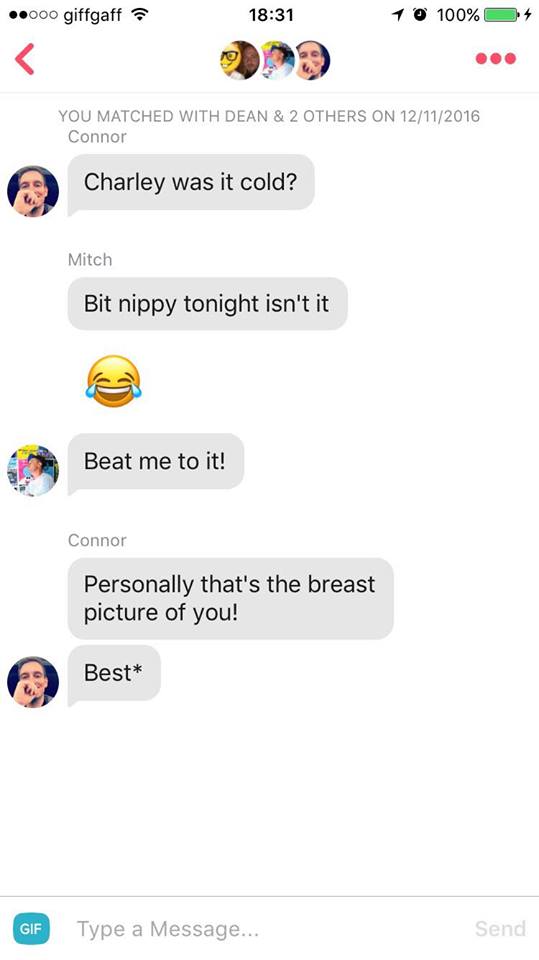 As much as these comments anger me, what’s more prominent is that they actually upset me. Over Friday and Saturday the messages were relentless, and put a bit of a damper on my nights. To me it’s not banter, it’s downright rude. These guys know exactly what they’re doing and that it’s not funny; they know that what they’re saying is degrading but they still say it. Yes, I didn’t wear a bra one night because they are uncomfortable, and yes, I took a selfie because I felt great at the time. That is not an excuse for you to knowingly give my confidence a knock. 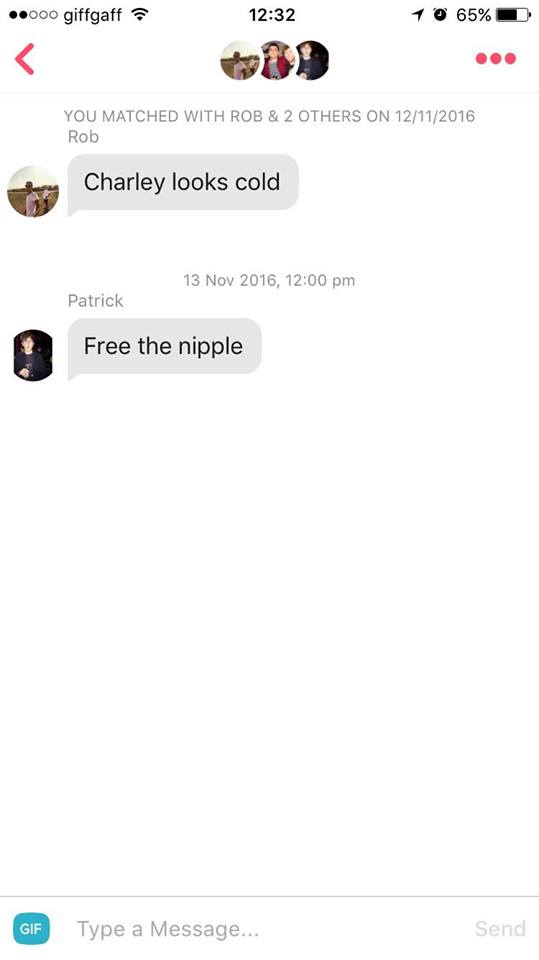 I like Patrick’s faux attempt at supporting feminism here

Nipples are there for a biological reason, and I shouldn’t be made to feel uncomfortable for having them on show through my top. What was once a selfie that I took pride in is now a reminder of the persistent misogyny we all face on a daily basis. Women can’t even go a night without wearing a bra without being judged for it. I cannot understand why the fact that my nipples are on show is something even noteworthy, and why it supercedes more interesting topics of discussion.

It’s not banter, it’s offensive. Abandon the teasing because it doesn’t make you funny, it makes you a bully.