There’s going to be a demonstration on Saturday, and the university haven’t warned students

This afternoon a group of students were handing out flyers on campus to warn against a far-right protest occurring at uni this weekend. For security reasons the students did not want to be named, but were happy to be interviewed by The Tab to shed some light on the situation.

The far-right group Racial Volunteer Force (or RVF) are planning a demonstration just outside the main gates of the university this Saturday, in retaliation to the university apparently sacking two of their members. To counter this, a student-run protest will be taking place to “drown out their racist slur”. 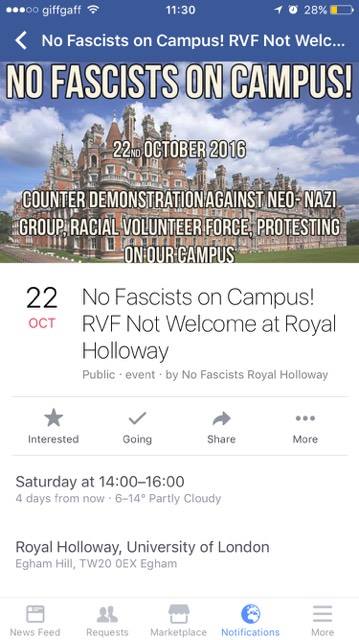 Students found out about RVF’s demonstration from the group’s activity on Twitter, where they contacted the SU, RHUL and Principal’s twitter accounts with the hashtag #RHULDemo. Considering this is such blatant advertising of a potentially violent event that could endanger students, it’s surprising that the university have remained quiet about it, making no attempt to silence the group or to warn students.

According to our sources the Student’s Union and the university have known about this demonstration since August, yet have released no statement about it or tried to warn students. “They’ve done nothing to prevent it except called the police, so there’ll be 25 officers on campus on the day, but they haven’t warned students in any way. This deomonstration is a danger to students, especially those who are ethnic minorities,” say our sources. 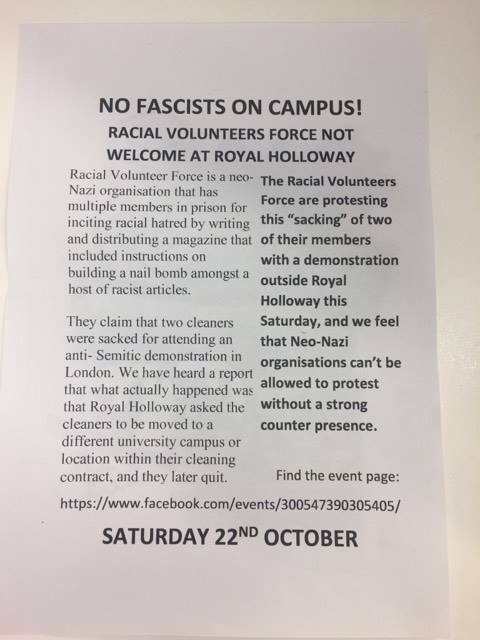 Mark Atkinson, the suspected leader of the group, has been incredibly vocal about the demonstration on Twitter, inviting local newspapers and journalists to come along. Along with another cleaner he was “sacked for supporting MET police against Jewish vigilante group Shomrim in Whitehall”, and this is the reason behind the demonstration, his twitter account tells us. Our sources say he was jailed in 2005 for inciting racial hatred, and has written a myriad of racist articles for an associated magazine, including one on how to make nailbombs. We’re not sure what the university’s recruitment process entails, but it seems pretty lowkey.

The demonstrators will likely be remaining around the area for most of Saturday, so the protest group advise students to keep their heads down and to avoid many of the pubs around Englefield Green and Egham. RVF may pose a serious security risk to students and members of the public, as they have been known to attack individuals based on their ethnicity or for wearing religious garments before.

Some members of the protest group have already received low-level abuse, with one student having received sarcastic nazi salutes in Englefield Green earlier this week as a warning.

The demonstration will take place from 2-4pm outside the Founders main gate. The protestors looked slightly worried about the possibility of an outbreak of violence but said that one can never predict how these things will turn out, “It’s a very serious situation,” they said.

The event has caused so much concern now that other Anti-Facist groups from London are planning on joining the counter movement. The North London AF group have said they will join the protestors against RVF this Saturday. RVF have 5 speakers planned for the demonstration, so the protestors are hoping to drown them out during the course of the afternoon.

RHUL may have put protective measures in place, but what are they doing to warn students? Nothing.