When Pimp My Summer Ball got serious

Teesside may have won the battle but they haven’t won the war for #PimpmySummerBall.

Last week war began. What started as a simple contest to win an extra 50,00 pounds to spend on the Summer ball turned into a battle that raged across the Twitter-sphere. Insults were shared, shade was thrown and things got messy. It all began with some simple tweeting of the #PimpmySumerBallRHUL and Teesside romped into an early lead. However, unlike other unis we quickly raised our game and caught them (Oxford I’m looking at you – while you may do well in a league table 11 tweets is just tragic).  Celebrities were spammed and the battle for re tweets begun. 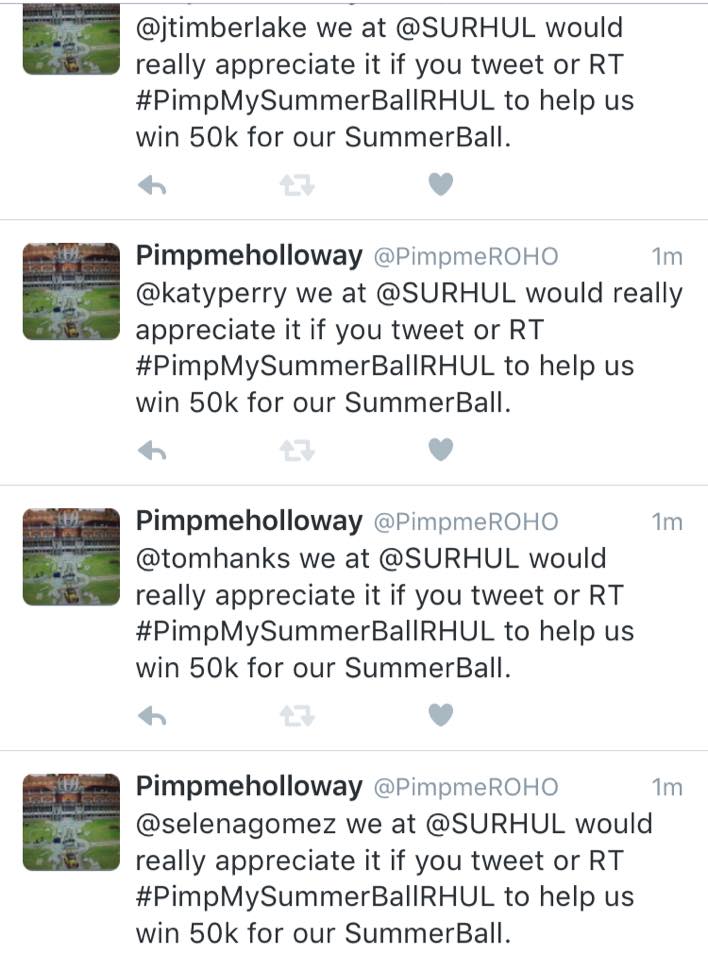 Someone certainly has ambitions.

Soon students took up the baton and joined in with the spamming.

While for some reason these celebrities did not respond, others felt far kinder. Our Alumni did us proud as Example and KT Tuntstall tweeted the hash tag. Vernon Kay, Wheetus, Katy B and Scouting for Girls all helped out, showing how you can never forget performing at our SU. This along with some obsessive tweeting (whoever runs that Medicine account I’m looking at you) led to us clawing back the lead, and has seen us reach a monstrous 241369 tweets of the hash tag.

However, the war has not been won, and in response Teesside have raised their game and amassed 339484 tweets but we can’t let them win. In 2014, they won and spent the money on a school disco in a car park and for their own good we can’t allow this to happen again. (https://www.youtube.com/watch?v=a5nsiY-pihI). In order to save them from this we’ve got to win and show them how it’s done. We may only have 9,000 students, but we live in Egham where the only place worth visiting is Runnymede Ribs. So now is the time to abandon the essays and take to twitter. Embrace the procrastination, join the battle and tweet #PimpmySummerBallRoyalHolloway.

The Tab Royal Holloway is looking for its new editorial team 2021-22!

Students to return to campus next month

Students who are returning will receive an email by 26th February

Rent strikes to continue next term at Royal Holloway

Despite the University offering rent concessions to some students

Royal Holloway confirms a no detriment policy for assessments in 2021

The majority of written exams will take place online.

An introduction to learning more about astrology, for Royal Holloway students

They said: ‘Racism has no place at Royal Holloway’

The definitive list of every single type of Royal Holloway student

From the pub crawler to the campus model

The movies and series to get you through every lockdown mood

Our definitive guide is just too good not to share

Students are encouraged to have tests before travelling home for Christmas

Royal Holloway students on their year abroad during a pandemic

Are you more bougie bitch or constantly skint?

Nothing but boo’s and bae’s x

Students looking back on Black History Month at RHUL

‘It’s helped with my anxiety’

Six Halloween ideas you definitely have not thought of

From creepy cocktails to spooky spa days, your Halloween this year is sorted

Every single person has one of these two energies

I feel powerless, afraid and vulnerable

QUIZ: How well do you remember Rihanna’s most iconic lyrics?

We found love in a hopeless place 😩

A ranking of 11 university Youtube channels from cringey to cringiest

It is quite literally a ghost town

Here’s how to make a sigil, the newest manifestation method all over your TikTok

‘Jayus has made a strong effort to find me’: OnlyJayus petition founder speaks out

The petition is nearly on 350,000 signatures

British tapas: Every iconic delicacy reviewed and rated out of 10

The epitome of fine dining

Quiz: Can you match the animated characters to the voice actors who played them?

I bet you can’t remember who played King Julian

It’s finally finished, so celebrate the end of Drag Race Down Under with these 21 memes

Nothing but respect for our new queen

FINALLY THEY ARE HERE