My weird week as the ‘Catfish girl’

What happened when my life went viral

As some of you may know, I’ve had a very weird week. I write at least one story a week for The Tab, on a variety of topics, but the ones which always get the most views are the ones about selfies. This is hardly surprising, considering the top most read story from The Tab ever is about a girl who went braless for a week: surprise surprise, the article included pictures.

With the massive lad culture which surrounds universities and university journalism in general, I’ve fallen into a bit of a weird niche, which The Tab have recognised. The more photos of me I post, the more views I get. It’s good for them, and fair play to them tbh, they want the views and they know what I’m good at writing about.

This was all fun and games at first, especially when my first stories about taking selfies and dating tips for men (which you can read here and here) went viral. They were featured in The Daily Mail, The Mirror, The Sun and many other smaller local newspapers, and were translated into different languages.

My articles were joke pieces, as most of them are. Of course there are no hard and fast rules about taking a selfie (like, can we just reflect on how stupid and narcissistic that sentence is for a second?) and, of course, anyone with even a scrap of feminism inside them realises all women are equally beautiful, and should be able to take selfies how, where and as often as they please.

A lot of people didn’t pick up on the sarcasm though, and I got a barrage of comments, ranging from “this is written badly” (it wasn’t, shut up) to people making Facebook statuses with near death threats aimed at me. Chill guys, it was a  j o k e.

Anyway, no amount of laughable statuses could have prepared me for what happened this week.

I hadn’t written an article for a while, and was pretty devoid of inspiration. I remembered how a few months ago people had been creating fake profiles and using my pictures, essentially, “Catfishing” people with my images. It made for an interesting story (which you can read here), I posted it, got the regulation few nasty comments, and got on with my life. And then it went viral. Viral viral. 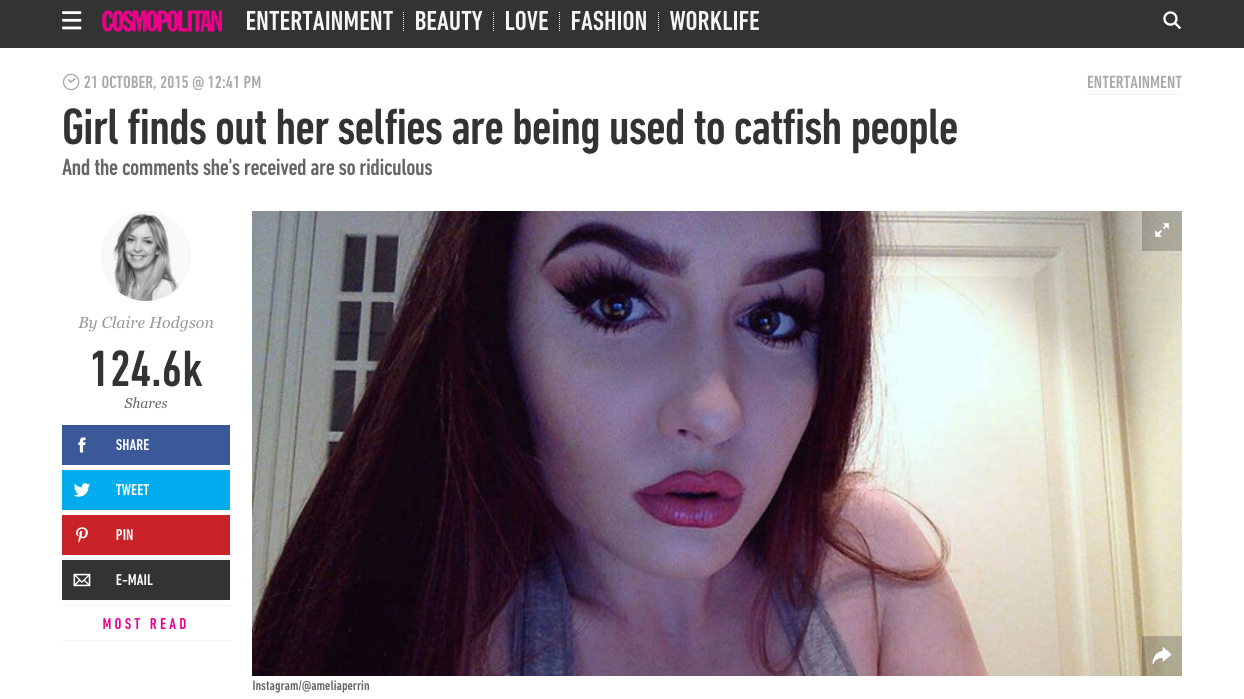 My story appearing in Cosmo

First, The Metro reported on it, and then The Daily Mail. These articles annoyed me, because they were obviously for huge publications, and had quoted things I’d “said” and changed them around. It made it look like they’d interviewed me, when, in fact, they wrote and posted the stories without my consent. I was sitting in a uni seminar when one popped up on Facebook in front of me, the first I’d even heard of it.

As someone rightly pointed out, my whole article was about people using my information without my consent. It’s also quite unsafe, broadcasting a lot of my information to such a huge audience. No one saw the tiny bit of irony there?

I knew the comments on The Daily Mail would be bad, but it was mainly just people saying how I’d “get my back doors smashed in”, or that I looked like a “50-year-old woman”. Whatever, I can deal.

However, when someone sent me a link to a UniLAD article about me with a one thousand comment thread, I had to read it. I’m only human, and curiosity got the better of me. I’m pretty thick skinned, but to be so humiliated and demoralised in a thousand different ways got me down a bit.

I tried to not let it get to me, but to find out a thousand people hated me for no reason got me agitated enough that I couldn’t sleep from worrying. I couldn’t do my uni work. In fact, I’ve got a whole pile of work sitting here for me to do because I’ve been so anxious over the whole thing. People don’t realise that whatever they think I may be, whatever persona I’ve apparently accidentally given myself over the web, I’m still human. I’m a 19-year-old girl who struggles to make a 4pm lecture. I buy multi-packs of biscuits instead of real food because I’m essentially a giant baby. I save my washing up for when my mum comes and gets me. I’m exactly like the people commenting, and yet they think it’s okay to type things they wouldn’t say in real life, to my actual face. Or anyone’s face. (Yes, I have a real life face. I EXIST).

This wasn’t the end of it though. I gained thousands of followers online, and articles also sprung up on Cosmopolitan, The Independent and The Sun. I did an interview for a TV documentary, an interview for two newspapers and a radio interview.The stories were translated and sent to Swiss, German, Chinese and Peruvian newspapers, probably among many others. I was even asked to do an interview for a San Francisco radio station. To be quite honest with you, I’m sick of the story. The complete non-story I wrote because I had nothing else to write that day.

The stories kept escalating. I read somewhere my pictures were being used on a prostitution website. I read there were naked pictures of me circulating. I read the Catfisher was offering sexual favours. Apparently I’m involved in legal action. It’s like no one even read my original article.

I’m not trying to be ungrateful, honestly. The exposure has been incredible, but I would have loved to have been able to use it to my advantage, rather than have it catch up with me in such a negative way. My mum, bless her, has been receiving texts from her friends asking how she is, because they’ve read in the newspaper about me and guess she must be feeling sad. No one wants their mum to feel sad. Me being in every national newspaper and just about every inch of the interweb should be a proud moment. It’s just that I wasn’t asked anything. Words were put in my mouth, things which I’d “said”.

So this is what I would like to say about it.

I’m post-selfie. Whenever a newspaper used a selfie of mine for a piece, it would always be an old one. I barely take them anymore. I dislike this niche I’ve been forced into, this idea taking pictures of myself and having a pageant title is all I’m worth. Maybe that’s what I’ve played up to on the internet, because that’s the kind of stuff the internet likes, but it’s biting me in the ass to be honest. I do other things. I go to uni. I write stuff. I read stuff. I love to learn stuff. I go out. I have friends and a boyfriend. I spend time with my family. I like to do the whole “blogging” thing.

But you won’t see any of that, and I doubt you’ll read any serious journalism from me for a while due to this whole “you are Miss South East who likes lipstick and selfies” thing I’ve been given. I doubt anyone will want anything serious from me after a quick Google of my name brings up hundreds of results with clickbait titles calling me “BEAUTY QUEEN” and “SELFIE GIRL”. I want a day off, to write something with some depth, a story where two selfies minimum aren’t a requirement.

And on the comments thing, I’m pretty disgusted at society. Was my mum the only parent in the world to teach their children if you don’t have anything nice to say don’t say it at all? From girls as well. I had literally thousands of comments across the various websites, calling me a slut, a whore, saying I deserved it while simultaneously pointing out a million flaws I didn’t even realise I had.

It’s spread to real life too, now. I was shopping in Tesco the other day in a tracksuit with no makeup on. I was picking up some milk when a girl, with the subtlety of a giant in a doll’s house, grabbed her friend, pointed at me, and then looked at something on her phone. I’m being judged in real life as well as online. People online have even questioned the legitimacy of my accounts, now saying I’m the “Catfish”.

The selfies I’ve posted in the past are when I’m (in the words of our Lord and Saviour Kimberly Kardashian) “feelin’ my look”. Taking a good selfie boosts my confidence, as it does with literally every other person on the planet. It’s lame but it’s true. As you can tell from my multiple pro-selfie articles (WHICH ARE ALL JOKES, JUST TO CLARIFY AGAIN FOR THE ONES IN THE BACK), I’m 100 per cent for selfies and love love love the girls who post them, flawless goddess captions and all. But now I don’t want to take them, after being pigeon holed into this “it’s all I am” spot. I sound so whiney in this, but I guess posting a massive rant is less embarrassing and time consuming than schooling one thousand individual people on UniLAD.

I also don’t really understand why I’ve received so much hate. I’m a pretty decent human being. I’ve taken some pictures of myself, in nothing more revealing than bikinis and sports wear. Sometimes in skimpy dresses. (However, I’m not slut shaming anyone here. Even if I wanted to take more “revealing” photos, I still don’t see how and why this should warrant hate). What I’ve done is the same as the rest of the female population, yet somehow this makes me a monster. If I’d been able to use the airtime I got to speak about how problematic that is, instead of being asked repeatedly “are you sad people used your pictures”, it probably would have made for a much more interesting read.

I was misquoted a lot in all the stories which went out about me this week. I didn’t authorise any of the content apart from the interviews I did, and it all got a bit out of hand. I never thought it was a huge interesting story, it just got blown out of proportion. So, from now on, I want to write more serious things. Not even serious things really, just other things. Mild infamy was weird for a week, and as someone who has now experienced the horrible things people write online, please stop doing it guys. For someone with thinner skin than I, reading the comments could be seriously damaging.