On 6th of December Queen Mary University of London made the controversial choice to ban certain newspapers on campus, condemning the tabloids as “fuelling racism”, which didn’t align with the university’s “diversity and inclusivity” policy.

City University London, regarded as the Oxbridge of journalism, also took the same decision despite the Daily Mail and the Sun being two of their biggest graduate employers.

In a daring act of disapproval, yesterday protesters flocked to the busiest part of the Queen Mary campus to hand out over 250 copies of the Sun as part of the #freethepress campaign. 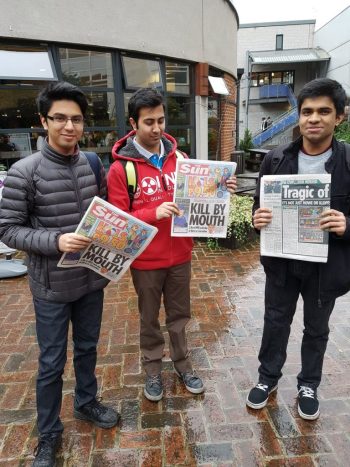 Emily Dinsmore, the founder of the QM Free Speech society and writer for Spiked, organised the protest bringing with her a pack of free speech advocates.

Emily said: “The stunt went well, we had a good group of students from QMUL and Barts helping to deliver/distribute newspapers.

“Our aim was to talk to individual students as well as do a couple of quirky things like putting up papers on the walls of the Students’ Union building.

“The reaction was mostly positive from people we spoke to, though of course we faced resistance. Interestingly, many students didn’t actually realise that tabloids had been banned from sale on campus and when we told them they were surprised.”

We're here at QMUL handing out @TheSun to students and telling them about campus tabloid bans and press freedom! #FreethePress pic.twitter.com/qOrZFBj9RN

Most of the students, even those who hold the tabloids in contempt, agreed that the ban on tabloids was ‘authoritarian’, and a hindrance to freedom of speech. Although a few students weren’t impressed.

When asked if at any point Emily, and fellow free speech advocate Bradly who was described as a “racist scumbag” during the protest, felt nervous about handing out the Sun on campus, Emily replied: “Yes very, I was nervous all day, but I realise it’s important to defend press freedom and censorship in any form on campus, so was always confident that it was the right thing to do and wouldn’t hesitate to do it again.”

Bradly added: “Admittedly I got a little tongue twisted at times, but that was more because of nerves of talking to new people. It was really positive on the whole.” 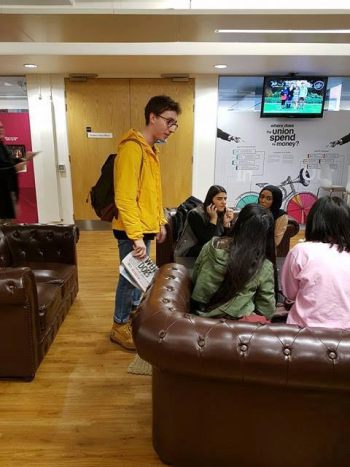 When questioned about the aftermath of the protest, Emily commented: “I think there’s a tendency nowadays for people who believe in free speech to be sidelined at university, it’s seen as ‘right-wing’ to believe in liberal ideas by many students.

“Often these people alienating students, have the loudest voices – they hold student council positions. I’m not worried about being targeted, I have strength of mind!”

Bradly told The Tab: “I am not phased at all by the harassment I have received on Twitter as a result of today, calling me fat, telling me to die, death threats etc.

“I find it ironic that these people who claim to be in opposition to hate speech, and believe that you shouldn’t be allowed to say hateful things are the same people who send the same aforementioned tweets.”

As part of the Leveson enquiry, the UK government are currently deliberating whether to make newspapers pay for court cases unless they back the state’s legislation.