Based on local expenditure and income, according to Natwest Student Living Index 2016

Portsmouth topped the charts for student living in the UK, beating Liverpool and Newcastle as the best city to be a student and proudly sitting below the national average cost of living in the respective cities.

The index takes into account the average amount a student spends on living and accommodation in relation to their incomes. Edinburgh was ranked the most expensive city to live as a student, followed by Southampton and Cambridge. 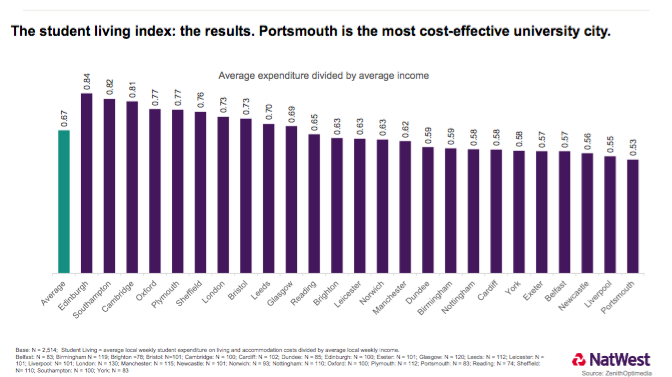 Although the index displayed Portsmouth students pay more than most on household bills, they receive the best income in comparison to other university students- £91.27 higher than Liverpool, the second most cost-effective city.

Not only is it the most cost-effective, but the greatest for student employment and earnings. The amount of money earned through term-time work and part-time holiday work surpassed all other cities.

With more money to spend, students also pass one-third of the time socialising. Hours spent socialising were shown to have the largest impact on enjoyment of the course, meaning overall Portsmouth is the most cost-effective and one of the most sociable cities in the UK.